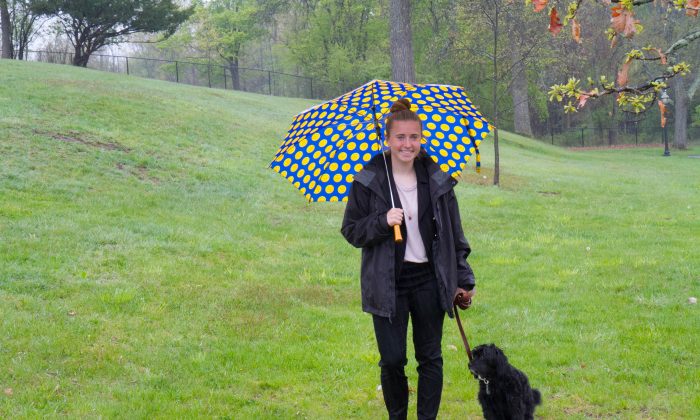 Goshen Girl Scout Kelly Fellenzer, 16, on May 1, 2016 walks her dog Shadow in Salesian Park in Goshen behind the Salesian seminary where she is planning a dog park for her Girl Scout Gold Award. (Holly Kellum/Epoch Times)
New York

Goshen Dog Park Soon to Be a Reality

GOSHEN—Just in time for I love My Park Day (May 7) and the 100th anniversary of the Girl Scout Gold Award, Goshen resident Kelly Fellenzer has received enough funding for her gold award project, a Goshen dog park.

Kelly, 16, started planning the project last summer and three months ago started a GoFundMe campaign to raise $8,000 for the materials and labor. While the page raised about $2,500, several large donations she recently received outside the GoFundMe site have exceeded her funding goal by over $3,000.

By the second week in May she hopes to break ground with the dog fence and by the middle of June have the rest of it completed and open to the public.

The dog park is about an acre in size, estimates Kelly’s father John Fellenzer, an engineer at Fellenzer Engineering LLP, and will be in Salesian Park behind the old seminary building next to the parking lot on the hill. The fence will connect with the 4.5 foot fence that skirts the park and will go till just before the stone memorial to St. Dominic Savio.

“We didn’t want to disrespect any memoriam that monument represents so we had to exclude that from the dog park,” Kelly explained.

Inside the 5-foot fence will be several agility features like hoops, a table, a tunnel and a bar jump for dogs to play on. Outside there will be two benches, a doggie station with bags, a sign with rules, and some flowers, “to make it polished up,” Kelly said.

The plan for the dog park has gone through several revisions after the Joint Recreation Commission, which oversees the parks, asked her to scale it down to make it feasible.

Her funding goal, she was told, was overly ambitious, and they asked her to create a two-phase plan that would start small and leave room for expansion by perhaps another Girl or Boy Scout.

All that is left for someone else to do, Kelly said, is to put a dividing fence inside the park to create two sections: one for big dogs and one for small dogs.

Kelly was part of Goshen Girl Scout Troop 161 before it became inactive several years ago, but she still wanted to complete her Girl Scout Gold Award, the equivalent of an Eagle Scout project, and so is doing it as a Juliette Girl Scout, which means she is not affiliated with any troop.

Kelly is a junior at Goshen High School and plans to do pre-vet in college. A self-described animal lover, she said her criteria was that it benefit the community and have something to do with animals. She came up with the idea after a brainstorm session with Mayor Kyle Roddey last August and has been working on it ever since.

It not only had to be approved by Joint Rec, which she met with four times, but the regional Girl Scout Council, and the Town Board. To gauge interest in a dog park, she did a community survey during the Fall Harvest Festival at C.J. Hooker Middle School last year, which received all positive responses from the 50 plus people who took it, she said.

Her project is more ambitious than most gold award projects, she admits, and it was a lot of hard work, but she is happy with the result.

“It’s so exciting to see it almost a reality,” she said.

Ketcham Fencing is supposed to be installing the fence the week of May 16 and the Wallkill East Rotary has volunteered to do the rest as their community service project starting the beginning of June.