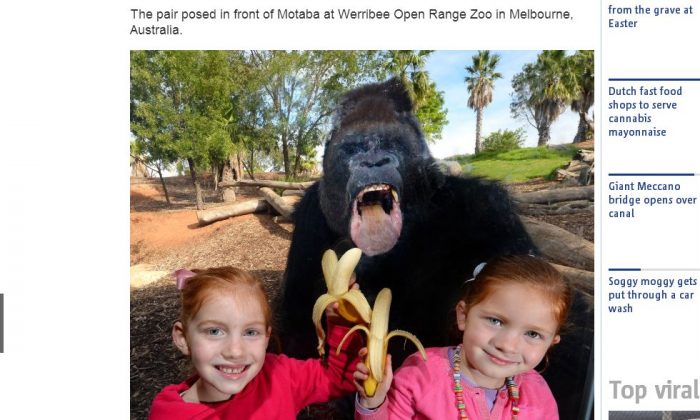 A screenshot of the Metro website shows the gorilla photobomb. (Via The Epoch Times)
Asia & Pacific

Gorilla photobombs: Two young sisters who were photographed offering their bananas to a gorilla–behind safety glass–at an Australia zoo got an unexpected surprise.

The gorilla made a fierce expression in what looks like an attempt to eat the banana.

In another photo, the gorilla put its purple tongue on the glass to try and get at the banana.

All the while, Ella O’Brien, 6, and her sister Bridget, 4, appear unfazed by the whole incident.

According to the Huffington Post, the gorilla is named Motaba, a 29-year-old male, who lives at the Werribee Open Range Zoo in Melbourne, Australia.

The Mirror tabloid reported that Motaba and his sons are the star attractions at the zoo.

Zookeepers at the facility have set up an initiative to allow people to get closer to the animals for photographs, according to The Metro publication.