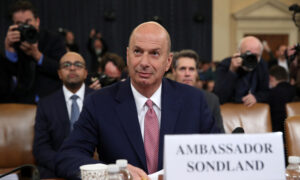 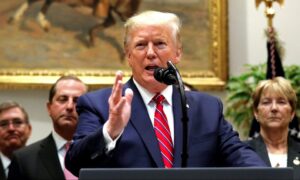 Trump Responds to Sondland Testimony: 'It’s All Over’
0 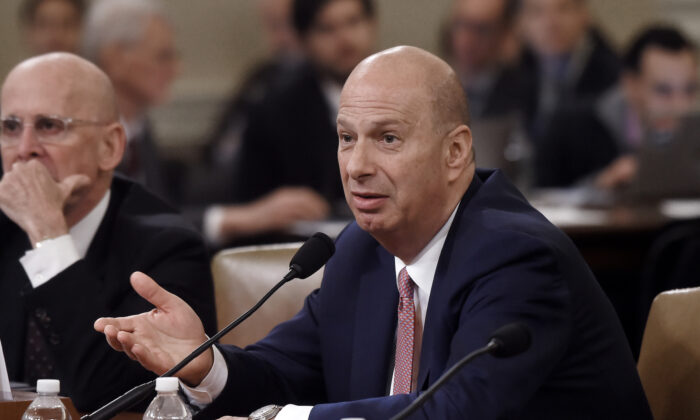 US Ambassador to the European Union Gordon Sondland testifies during the House Intelligence Committee hearing as part of the impeachment inquiry into US President Donald Trump on Capitol Hill in Washington, DC on Nov. 20, 2019. (Olivier Douliery/AFP via Getty Images)
Impeachment Trial

Gordon Sondland, who served as the U.S. Ambassador to the European Union, issued a statement late Friday saying that President Donald Trump is set to recall him from the role.

“I was advised today that the President intends to recall me effective immediately as United States Ambassador to the European Union,” Sondland said in a statement issued via his attorney.

“I am grateful to President Trump for having given me the opportunity to serve, to Secretary Pompeo for his consistent support, and to the exceptional and dedicated professionals at the U.S. Mission to the European Union,” he added. “I am proud of our accomplishments. Our work here has been the highlight of my career.”

The Epoch Times has contacted the White House and the State Department for comment.

Sondland’s statement was released shortly after Lt. Col. Alexander Vindman’s lawyer said that Vindman was fired by the White House.

Both Vindman and Sondland testified in the Democrat-led House of Representatives’ impeachment inquiry against President Trump.

The Senate voted to acquit Trump on Wednesday, Feb. 5, of the two charges of abuse of power and obstruction of justice, ending the third impeachment trial in U.S. history.

The Democrat-led House voted along party lines to impeach Trump on Dec. 18 after an impeachment inquiry that lasted for months. House Democrats who sought Trump’s impeachment claimed that the president withheld millions of dollars to Ukraine in exchange for investigations.

Sondland, at the House impeachment hearing in November 2019, confirmed that he never heard directly from Trump about a quid pro quo that connected military aid for Ukraine in exchange for investigations into corruption, saying “I never heard from President Trump that aid was conditioned on an announcement of [investigations].”

But Sondland also said at the hearing that “we all understood” that a meeting at the White House for Ukraine’s president was conditioned on an investigation or a statement announcing investigations.

“Everyone was in the loop,” Sondland said at the hearing. “It was no secret.” He added, “Was there a ‘quid pro quo? The answer is yes.”

Sondland also said that he received no direct orders or much communication from Trump himself but that he was acting on behalf of Rudy Giuliani, Trump’s personal attorney. Giuliani denied that assertion.

Trump, Ukrainian officials, and other White House officials at the time categorically denied the allegations of bribery and quid pro quo.

When Republican lawmakers pressed Sondland at the November hearing, he admitted that no one had told him about investigations and relied only on presumptions that he had made.