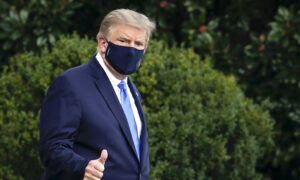 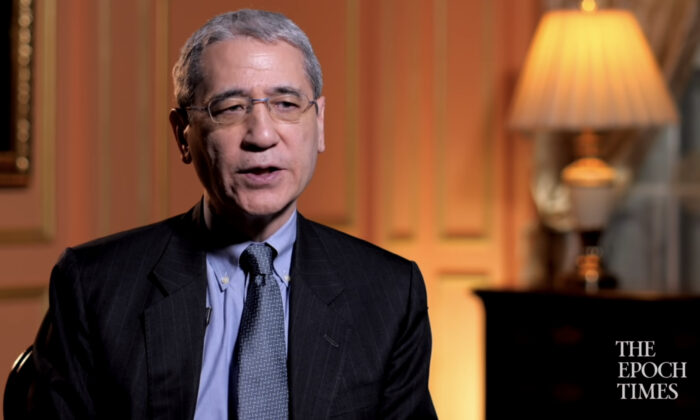 Gordon Chang: We Need to Cut Ties to the Chinese Regime

Gordon Chang, a China affairs expert and widely known for his book “The Coming Collapse of China,” said on Sunday that the Chinese regime’s challenge is existential and the United States should cut ties to it.

“Chinese leaders are both arrogant and insecure at the same time. And this, to me, is the worst possible combination of attributes. So what should we do?” Chang said in an online webinar held by the Florida Society for Middle East Studies. “In what to me looks like an emergency, we need to cut our ties to the Chinese regime.”

Chang explained that cutting ties is not just decoupling. To decouple, or end supply chain vulnerability, is now a majority view. But he thinks the U.S. government should bring its factories back from China, end technological cooperation partnerships, cut off cultural exchanges, get Chinese diplomats and journalists out of America, get China’s newspapers off newsstands, and get Chinese cable stations off of our airwaves, etc.

“Yeah, this does sound drastic, but we do have an emergency,” Chang continued. “China uses all of its contacts with our country to try to overthrow our government. And we are being overwhelmed. The FBI and law enforcement in the U.S. is overwhelmed, so [are] the federal and state government[s].”

“China’s form of communism is unreformable,” Chang added. “Now we are getting to a critical point. So for us, a whole of government, indeed, in fact, a whole of society approach must begin now.”

Before Chang came to this conclusion, he first talked about three topics. First was China’s spreading of the CPP (Chinese Communist Party) virus, second was China’s subversion of the American government, and third was China’s descent into militarism.

“The deception about the contagiousness of the disease, forcing other countries to accept arrivals from China, downplaying the severity of the disease. These all show us that this was a deliberate release of the disease from China itself,” said Chang.

Chang pointed out that the Chinese ruler Xi Jinping locked down Wuhan and surrounding cities, knowing it would be effective in stopping disease.

“So that means [Xi] must have known that by pressuring countries to not impose those measures, he was spreading the disease.”

Chang went on to say that the U.S. government must impose costs on China.

“This is not the last pathogen that will be generated from Chinese soil. So we have to establish deterrence. And we can suspect that the next disease from China will be worse than COVID-19.”

The total death cases for COVID-19, the disease caused by the CCP virus, had reached almost 400,000 as of Jan. 17, according to data from the Centers for Disease Control and Prevention (CDC).

Chang also pointed out that the 2017 edition of the Science of Military Strategy, an authoritative publication from China’s National Defense University, actually discusses the establishment of a new form of biological warfare, employing “specific ethnic genetic attacks.”

“So yes, China is designing pathogens that will leave the Chinese alone, but will sicken everybody else in the world,” Chang claimed. “And there is evidence that they’re actually working on diseases like this.”

Subversion of the United States

Chang said that Xi Jinping launched incendiary disinformation campaigns against the United States after the first week in February 2020.

“One of these campaigns culminated on March 12, when we saw the Chinese Foreign Ministry engage in a Twitter storm.”

Chang said China Foreign Ministry spokesman Zhao Lijian suggested that the disease started in America, and it was the U.S. army that carried this disease to Wuhan.

“CDC was caught on the spot. When did patient zero begin in U.S.? How many people are infected? … It might be U.S. army [sic] who brought the epidemic to Wuhan,” China Foreign Ministry spokesperson Zhao Lijian wrote on Twitter on Mar. 12, 2020, insinuating that the CDC had covered up the real number of CCP virus infections.

Chang went on to say that Beijing has also run large operations on social media or through text messages to attack the U.S. President and cause chaos in America.

Chang said that Tik Tok, a very popular video-sharing app, uses a sophisticated algorithm to make people addicted to it and sends videos to Americans to inflame the protests.

“Because of this control, Beijing can, as they say, boost the signal. In other words, get Americans to do what they want.”

Radio Free Asia reported that an intelligence unit of China’s People’s Liberation Army actually based themselves in the Houston consulate, Chang pointed out.

The Houston consulate was ordered to close by the Trump Administration in July 2020.

“From there, they used big data and artificial intelligence to identify Americans likely to participate in Black Lives Matter and Antifa protests. And then, that military Chinese military sent them videos on how to riot, and they did that through Tik Tok videos.”

“This is more than just subversion. This is indeed an act of war,” Chang added.

Chang also mentioned an unconfirmed report that Mandarin-speaking protesters were acting in obvious coordination in the burning of the St. John’s Episcopal Church, one block from the White House.

Chang said that People’s Daily, the main state-run publication in China, carried a piece that declared a “People’s War” against the United States in May 2019.

“That means China’s challenge to us is existential,” said Chang.

“Unfortunately, we have a China that doesn’t want to live within the current international system,” continued Chang. “It wants to overthrow it altogether.”

Chang said China now has a so-called Wolf Warrior diplomacy. Under this diplomacy, Xi Jinping is threatening to invade Taiwan, provoking countries in its peripheral waters, and has invaded India and killed 21 Indian soldiers.

“And of course, as we all know, it’s been moving fast to take away Hong Kong’s autonomy.”

Chang suggested that one reason for this would be Xi Jinping came into power as the “least unacceptable choice.” He realized he needed a political base, and he identified the military as the core of his support.

“So Xi Jinping along with the military could end up running the country.”

Another probable reason for China’s militarism is China is beset by a host of problems, such as the environment is exhausted, people are festive, no support around the world, the economy was stagnating, Chang suggested.

“Without prosperity, the only remaining basis of [Communist Party’s] legitimacy is nationalism,” Chang continued. “Nationalism, as a practical matter, means military misadventure abroad.”

“So Xi Jinping, the all-powerful Chinese leader, has a very low threshold of risk, which means that he has incentives to do something which would be unimaginable to us.”

“Indeed, we should not be allowing an enemy to exploit the openness of our system to overthrow our form of government,” Chang concluded.

Chang said that the incoming President Joe Biden’s senior advisors “have said they don’t want to impose costs on China, they want to strengthen the United States.”

“But my point is, to the Biden team, you can’t strengthen American technology or American economy when China is stealing somewhere between $500 billion to $600 billion worth of U.S. technology and information [each year]. It’s just not possible.”

John Ratcliffe, Director of National Intelligence, stated in an op-ed in December that China’s intellectual-property theft costs America as much as $500 billion a year.

“This is drastic, this is politically unacceptable in our country, but it will become the inevitable result if we have tragic events,” Chang continued.

“But look, you’re dealing with a Third Reich type state. So the question is, how do you deal with someone like Hitler? You know this is the crimes against humanity that China is perpetrating, are worse than those of the Third Reich prior to the mass exterminations of 1941.”

Responded to a question about China’s policy toward Uyghurs, Chang said that the concentration camps, genocide, forced organ harvesting to Uyghurs, and other things are “worse than what the Third Reich did” before its mass extermination in 1941.

According to some medical experts and independent investigations, Falun Gong practitioners are the main source for forced organ harvesting.