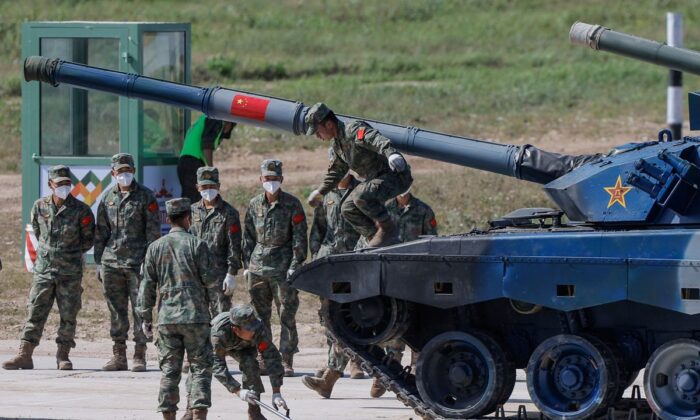 Chinese soldiers operate with their Type 96A tank during the Tank Biathlon competition at the International Army Games 2022 in Alabino, outside Moscow, Russia, on Aug. 16, 2022. (Maxim Shemetov/Reuters)
US-China Relations

The Chinese Communist Party (CCP) is preparing for a war, according to China analyst and author Gordon Chang.

Several recent developments in China’s policies—particularly an amendment to China’s National Defense Law—could signal that the regime is preparing for a full mobilization of its military, according to Chang.

“China’s newly amended National Defense Law takes certain powers over military matters from the civilian State Council and gives them to the Communist Party’s Central Military Commission, which controls the People’s Liberation Army,” Chang wrote in an email to The Epoch Times.

“That move centralizes military decision-making. Moreover, the amendment, which relates to war mobilization, signals that the regime is preparing the Chinese people for conflict.”

In addition to centralizing the authority for military mobilization, Chang noted that the CCP is making efforts to effectively sanction-proof its political elite by forbidding certain officials from owning foreign real estate or shares in offshore companies.

“If Chinese officials and their family members do not own foreign assets, foreign countries cannot strip them of their holdings,” Chang wrote.

“Shedding these assets, therefore, makes those individuals immune to one of today’s most commonly imposed sanctions.”

Through the centralization of authority over military mobilization and the shoring up of economic defenses against potential international sanctions, Chang believes that the CCP is preparing for the possibility of armed hostilities. The question remains, however, as to just where such a war could break out.

Following a month of unprecedented military exercises and economic retaliations, Taiwan is in the limelight.

There are numerous other flashpoints along China’s periphery—any one of which could quickly escalate to outright conflicts—such as the mountainous Ladakh border region that China shares with India, disputes throughout the South China Sea with the Philippines and Vietnam, and disputes in the East China Sea with Japan.

Indeed, Chang believes that China’s neighbors could be a potential target should the CCP believe the opportunity is on its side.

“In the past few weeks, China’s regime has put Taiwan in the spotlight, but the Chinese party-state is threatening most of its neighbors to its south and east,” Chang wrote. “All neighbors there, large and small, are under threat.”

“We do not know where Beijing will strike next. China’s Communist Party does not act on grievances; it acts when and where it smells opportunity.”

Beyond hostilities in pursuit of regional hegemony, Chang said there is another threat permeating the world—the CCP’s ambition to leverage an international people’s war.

People’s war is a doctrine established by communist leader Mao Zedong and later evolved by Deng Xiaoping to promote long-term revolutionary communist struggle. According to Chang, the current CCP leadership is blending the doctrine of people’s war with a global Chinese identity to weaponize the Chinese diaspora community and promote the CCP’s interests.

“China’s regime makes the ‘blood’ argument, that all Chinese are of the same blood and that all are therefore bound to support the Communist Party,” Chang wrote.

“The Party has recently been making the case that it must unite the world—tianxia or ‘All Under Heaven’—and that means uniting all Chinese, no matter where they live and no matter their citizenship.”

Though the CCP has been working on weaponizing the Chinese diaspora against the West for decades, Chang doesn’t believe the United States is prepared for conflict with China. He said the Biden administration fails to comprehend the CCP as an adversary.

“President Biden gives the impression that he is oblivious to China’s mobilization of Chinese society,” Chang wrote. “He will not even call China an ‘adversary,’ and he certainly does not use the correct term, which is ‘enemy.'”

To that end, Chang said he feared the administration is content to watch and wait as the CCP prepares for armed hostilities that could overwhelm the United States and its ability to defend itself.

“Too often in the past, American presidents let enemies attack us first. The Chinese will not, with their first attack, give us the opportunity to rally ourselves.”

While previous animosities in the Sino–U.S. relationship were effectively overcome through dialogue, Chang said that CCP leader Xi Jinping now maintains a military that is superior in every way to that of China 20 years ago, and that the regime is now, after years of preparation, prepared to go to war.

“Xi is making all-of-society preparations to engage in sustained conflict,” Chang wrote. “China is now more ready for battle than it has been in centuries.”