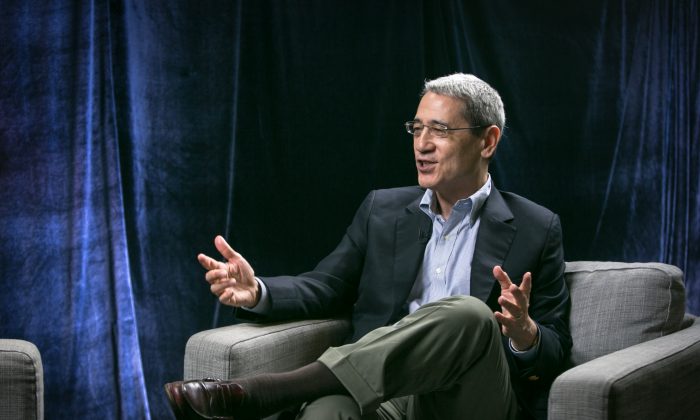 Gordon Chang: ‘China Is Going to Go Into Free Fall’

Party politics demand stability, but how long can it last?
By Valentin Schmid

China expert Gordon Chang is best known for his book “The Coming Collapse of China,” which he wrote in 2001.

What he predicted is now four years overdue, but Chang continues to provide us with an uncensored, behind-the-scenes view of the Chinese political economy. The core arguments he made in the book are more valid than ever, and in 2015, Chang predicted the continued pressure on the Chinese currency as well as rising capital outflows, topics that remain with us until today.

Epoch Times spoke to Chang about a superficially stable China in 2017 and what is causing the real friction under the surface.

Epoch Times: China managed to stabilize its economy in 2016. Will the regime be able to continue that in 2017?

Gordon Chang: China looks strong, but it’s actually weak. It has passed the point of no return.

[The regime leadership] has put in an enormous amount of debt, and they did stabilize the economy. The manufacturing sector is a beneficiary; we are starting to see some inflation. But the cost of this is enormous. It’s the old tactics of using debt to generate growth. It shows desperation more than anything.

There are some things that China should do regarding reform in 2017, but they won’t get it done because of the political imperative. This year, we have the [19th National Congress of the Communist Party of China] in the fall, where they will either announce a new leader, or Xi Jinping will remain in control. That is a critical one.

I think they will be successful holding the line through the Party congress. After that, they are going to fail.

So they are going to try to hold the line. Xi has relentlessly taken the economics portfolio from [Chinese Premier] Li Keqiang. [Xi] gets the credit, but he also gets the blame. He is not going to want to see a major disruptive event between now and the Party congress. It should be obvious, but a lot of people don’t take this into account.

Even if it was growing at the official rate, China is creating debt five times faster than incremental GDP. Beijing can grow the economy with ghost cities and high-speed railways to nowhere, but that’s not free, and it’s not sustainable.

After the Party congress, China is going to go into free fall.

The only thing that can change the Chinese economy is fundamental economic reform. But they are moving in a regressive manner—Beijing is stimulating again. It’s taking China away from a consumption economy and private companies toward the state.

The “Chinese dream” [outlined by Xi] wants a strong state, and it’s not compatible with market reform. Even if Xi were up for liberalization and change, it would be too little too late. Stimulus is going to increase the underlying imbalances. That’s going to make it more difficult to adjust.

Epoch Times: What is happening beneath the superficial stability?

Mr. Chang: Look at what happened last year: Capital outflows were probably higher than 2015. And 2015 was unprecedented, somewhere between $900 billion and $1 trillion.

The Chinese people see what other people have seen and it doesn’t make sense anymore. They see the economy is not growing. People are concerned about the political direction of the country, and people see the end is not that far away, so they move their money out.

To stop the capital outflows and maintain stability, they put in draconian capital controls, starting from the end of 2015.

They put some real limitations on outbound investment for corporates and multinationals. They can do this, but for how much longer? They are disincentivizing people to put money into China because they don’t know they can take it out again. In spite of the controls, they had record outflows. Capital outflows in the second half, when the controls tightened, were higher than in the first half.

They are going to continue to smooth things out after the Congress, but they won’t have the ability to continue the game. The whole thing is about confidence, and there is a failure of confidence in China.

Epoch Times: They are also using their foreign exchange reserves to manage the decline of the currency. The International Monetary Fund, for example, says the $3 trillion they have is enough to run the economy.

Mr. Chang: They can just give you any number, and you don’t know whether it’s the right one, just like GDP. You cannot go to the State Administration of Foreign Exchange and look through their books. They can report anything, and you don’t know. And they have a high incentive to fake that number.

We also know they have a synthetic short position because they are selling derivatives through the state banks. If you look at the estimates of foreign exchange reserves each month, they always outperform the surveys. China always outperforms—it doesn’t take a genius to figure out that the foreign exchange (FX) number can’t be right. Misreporting their FX reserve declines minimizes the problems, so people keep believing in the currency.

They can report anything, and you don’t know. They have a high incentive to fake that number.

So I think they don’t have the $3 trillion. They have done the trick Brazil pulled in 2014 of selling derivatives instead of actual dollars. According to my sources, there’s $500 billion still to be accounted for.

Then there are illiquid investments in the Chinese foreign exchange reserves, around $1 trillion. According to my estimates, you are then down to $1.5 trillion in usable money to defend the currency. The FX reserves aren’t as big and as liquid as Beijing wants them to be.

Epoch Times: So they will have to devalue sooner or later.

Mr. Chang: I don’t think they are going to devalue before the 19th Party Congress later this year.

After, they are going to devalue, but not as far north of eight as it needs to be [current rate is about 6.9 per dollar]. The insufficient devaluation will shake confidence; people think it’s not enough, that it has to be more. Eventually, someone is going to figure out that their reserve numbers are wrong. But the one thing they need to defend their currency is foreign currency.

Xi says the Chinese dream is a strong China. So he is responsible for everything, and depreciation never benefits the Chinese consumers. [The Chinese leaders] continue to make stupid decisions. It’s the political system; the political imperative is too strong. It would be too embarrassing to do wholesale reform. Xi wants to appear strong. They have always tried to prevent natural economic adjustments—and by doing that, they have made the underlying imbalances bigger.