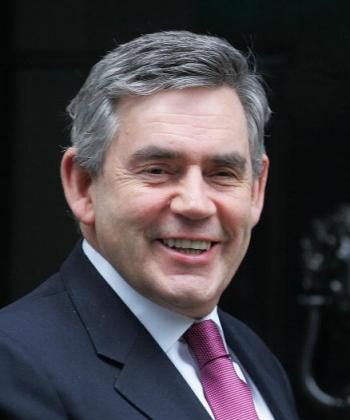 Simon Veazey
Freelance Reporter
Simon Veazey is a UK-based journalist who has reported for The Epoch Times since 2006 on various beats, from in-depth coverage of British and European politics to web-based writing on breaking news.
View profile
Follow
biggersmaller
Print
As political gaffes go, it was a big one.

Already sardonically dubbed ‘Flash Gordon’ by detractors, the self-labeled 'serious' British Prime Minister has long struggled with the accusation of hubris. So, when he mistakenly said ‘we had not only saved the world’ (instead of ‘saved the banks’ as he had intended), Parliament was in uproar.

Prime Minister Gordon Brown – formerly the finance minister for the last ten years during the Blair years – has been a major figure in recent international talks and efforts to resolve the global financial crisis.

Opposition politicians have accused Brown of enjoying the opportunity of the banking crisis to further himself, trying to juxtapose the Prime Minister’s apparently happier disposition with the misery that the economic crisis will mete out to the British public. They have essentially accused him of wanting to shine on the world stage at the cost of the British people.

"Well, it's now on the record.” said opposition leader David Cameron, following Mr. Brown’s gaffe. "He's so busy talking about saving the world, he's forgotten about the businesses in the country that he's supposed to be governing."

Although he cracked a smile, many commentators say Mr. Brown failed to deflect the political force of the gaffe as he should have. Mr. Brown has often been criticised for being somewhat flat-footed in the rough and tumble of parliamentary debate, especially compared to his predecessor, Tony Blair, who was renowned for his quick wit, lightness of touch, and ability to box himself out of such a corner.

After the chamber finally fell quiet following the shrieks of delight from the conservative benches, Mr Brown’s reponse was typically serious: "The opposition may not like the fact that we led the world in saving the banking system, but we did."

As the Prime Minister sat down, one MP shouted: "Moses."

Asked at a government briefing later whether Mr Brown had meant to say he had saved the world, his spokesman said: "The prime minister has been reflecting on helping hardworking families through the downturn."