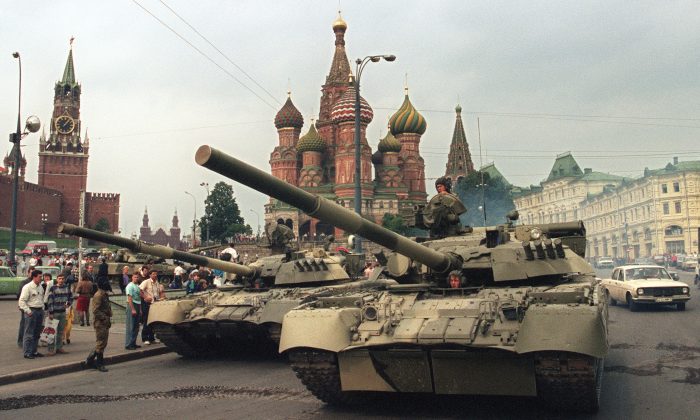 Gorbachev’s Reforms and a Failed Ideology

The sudden and largely peaceful collapse of Soviet communism between 1989 and 1991 is lauded as one of the great political achievements in recent history. As then-head of the Soviet Communist Party (CPSU), Mikhail Gorbachev stands prominent as the architect of the reforms that introduced capitalism to Eastern Europe and began the transition out of authoritarianism.

But three decades ago, when the final leader of the USSR and his colleagues began their work on the iconic policies of glasnost—openness—and perestroika—economic restructuring, saying goodbye to communism wasn’t part of the plan.

Rather, the sudden and ill-planned transition to a non-communist future took hundreds of millions of people by shock. Russia and the nations created from its former territories faced not only new dilemmas, but also the untreated ills of Marx and Lenin.

Gorbachev, aged just 54 when the Communist Party Politburo chose him as general secretary in 1985, was looking for a solution to the economic backwardness, political oppression, and corruption that had plagued the USSR since the beginning of its existence.

But even as his administration pushed through the fateful policies glasnost and perestroika, Gorbachev held onto the Marxist ideology—with its unsavory legacy of mass murder, starvation, and state terror—of the Party and its past leaders.

Gorbachev had initially sold his reforms as necessary for the further development of communism. In particular he wanted to catch up with Western technological progress for concerns about defense, because the United States and its NATO allies had begun to enjoy a decisive qualitative edge over the vast Soviet military.

As described in the 2000 book “The Destruction of the Soviet Union” by David Lockwood, the reform attempts aimed to engineer an “economic shake-up.” It was assumed that the military industry, reinforced using western-style means of economic growth, would shore up the rest of the Soviet economy without requiring major changes to the communist system.

“In general, these attempts failed,” Lockwood writes. The Party’s 1987 commitment to intensive growth “reflected the fact that the Soviet leadership, for the most part, initially believed that moderate levels of reorganization would suffice.”

Gorbachev and his administration piled on more radical measures to effect change, but each step weakened the control of the Soviet regime over the economy, and invited backlash from the Party bureaucracy and communist leaders.

Lockwood writes: “It was evident that the Party itself was no longer a suitable instrument through which to carry out the reforms.”

In the book “Why Perestroika Failed,” written by Jeter J. Boettke in 1993, the author suggests that Gorbachev’s restructuring failed to bring about the economic improvements that the USSR needed, as it was never intended to reduce the influence of the state, only change its applications.

“Gorbachev liberalized government restrictions in some ways,” Boettke writes. “But much of perestroika seems to have been primarily an effort to reallocate patronage opportunities to consolidate his power base, a rather routine practice of fresh autocrats throughout history.”

Gorbachev intended to update communism for the modern era, not to introduce a market economy.

“The goal was to make the Soviet system more humane and more efficient,” according to Boettke.

In failing to make a clean break with this deleterious ideology, Gorbachev allowed his efforts to be pulled in different directions. On the one hand, Western leaders and society applauded the Soviet leader for tolerating free speech, media, and political dissent. The Berlin Wall, which symbolized the brutality of communist rule, was no more; the Cold War was over.

But at home, the contradictory aims of Gorbachev’s policies and the institutions through which he enacted them proved self-defeating: ethnic unrest was flaring up in parts of the Soviet Union, and much of Gorbachev’s own regime opposed him.

The death knell came in August 1991, when a Communist Party faction with backing from military and secret police elites arrested Gorbachev and attempted to bring back the old order.

Ultimately, the August coup failed for a want of political will. Boris Yeltsin, president of the Russian part of the USSR, declared his nation’s independence—dashing the last hopes that the Soviet Union could survive as a reformed superpower. On Dec. 25, 1991, the USSR was dissolved.

The results of Gorbachev’s reforms, good and ill, have been viewed with increasing scrutiny, cynicism, and even regret. While the ever-present totalitarianism of the Soviets may be a thing of the past, post-communist leaders are not above using terror and political oppression to silence their opponents. Russia and many of its neighbors continue to suffer from deep-seated corruption and societal decay, hampering growth and poisoning international relations.

China, which remains under the rule of an avowedly communist regime but experienced rapid economic growth starting in the 1980s and 1990s, is a favorite subject of comparison to the Soviet collapse.

The Chinese regime has always advertised reform of society, economy, and politics as necessary for the country to stay competitive. And as China’s economic growth begins to slow, change appears all the more pressing. A recent documentary series, called “Implement Reforms to the End,” began airing on Chinese state television and eulogized the economic policies of the 1980s.

Putting aside the prosperity enjoyed in many parts of modern China as compared with the Soviet Union’s economic dysfunction, current Chinese leader Xi Jinping faces many of the same political dilemmas that Mikhail Gorbachev faced—and was brought down by—during his time in power.

Since becoming Communist Party General Secretary in 2012, Xi has had to negotiate the influence of previous generations of Party elites, and has pursued a long-term anti-corruption campaign to root them out. Hundreds of high-ranking cadres, many of them tied with the political faction of former Party head Jiang Zemin, have been investigated and purged in this endeavor.

Gorbachev, with his glasnost and perestroika, seems different from Xi in his approach. But by opting to remain loyal to the communist system, Gorbachev opened himself up to attack by disgruntled elites when his reforms threatened their vested interests.

Similarly, Xi Jinping’s anti-corruption campaign has run into heated opposition from the Chinese officialdom, echoing Gorbachev’s own impasses with the ossified Soviet bureaucracy. One common phenomenon is “bu zuo wei,” which in Mandarin refers to officials who slack off in or offer passive resistance to implementing the directives of the Xi-controlled Party Central.

At the same time, Xi has established himself as “core leader” of the Communist Party, and backed many endorsements of official Marxist ideology.

Time will tell if Xi is dedicated to the communist experiment, or he merely finds the Party-state a convenient tool to position himself for a genuinely different form of leadership. In light of the Soviet experience, the path he takes will decide the future of his rule and the legacy he leaves.

Communism is estimated to have killed at least 100 million people, yet its crimes have not been fully compiled and its ideology still persists. The Epoch Times seeks to expose the history and beliefs of this movement, which has been a source of tyranny and destruction since it emerged. Read the whole series at ept.ms/DeadEndCom