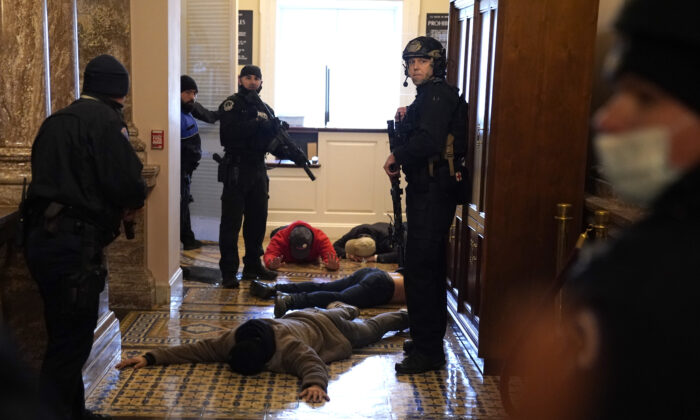 U.S. Capitol Police (USCP) Inspector General (IG) Michael Bolton is being challenged to address what three Republican members of the House Committee on Administration describe as the “politicized campus security” of Speaker of the House Nancy Pelosi (D-Calif.).

“Since January 6th, the Majority has politicized campus security, fomenting distrust among Republicans and raising doubts among members as to the unbiased, impartial security decisions being made around the Capitol complex,” the GOP lawmakers told Bolton in a letter obtained by The Epoch Times.

“We are concerned that this erosion of trust in USCP leadership threatens the mission of USCP, the Capitol Police Board, and campus security overall.

“This hearing comes at a critical time when frustration and concerns among Members and the American People need to be addressed.”

Bolton was scheduled as the lead witness on Feb. 17 for the committee’s oversight hearing on the IG’s investigation of the USCP’s performance during the Jan. 6, 2021, protest and riots at the U.S. Capitol.

In their letter, the GOP trio cited four examples of Pelosi’s “abuse of USCP resources and Americans’ constitutional right to petition their government” in security actions taken in the wake of the attack:

1. In the week after the protest, Pelosi ordered the installation of metal detectors that every congressman and staff member must first go through before entering the House chamber.

“It is unclear what justification existed to install these metal detectors at that time, as they would not have stopped rioters the week prior, and the only people allowed in the Chamber are Members of Congress and certain staff,” the GOP letter said.

“Since this area is already highly restricted, the installation of metal detectors was instantly recognized as a political act with no security basis, directed by Speaker Pelosi and not by unbiased security experts. This was done despite her recent insistence that she has ‘no power over the Capitol Police.'”

“It is unacceptable that USCP officers took photographs of a Representative’s legislative planning materials and questioned his staff on the merits of these items. Not only does it potentially run afoul of Speech or Debate Clause protections for Members, it is yet another example of Members being treated as the threat rather than as duly elected Representatives in Congress, here to perform their constitutional duty to serve their constituents,” the congressmen wrote.

3. The letter cited media reports about management changes in the USCP intelligence division prior to Jan. 6 that “caused internal confusion” among officers on the day of the protest.

“These changes include ‘background checks’ on people [with] whom lawmakers planned to meet and information on the political opponents of lawmakers,” the letter continued. “Committee Republicans have strong reason to believe that these claims have merit and are gravely concerned on the effects such policies would have to the detriment of Americans’ civil liberties.”

The Republican trio pointed out to Bolton in their letter that the two programs “will include background checks for anyone with a Capitol ID, plus all public visitors to the Capitol. Additionally, staff would be required to badge in when they enter the buildings and certain spaces of the Capitol campus, providing real-time information on the movements of individuals on campus.”

Bolton should publicly address these issues during the hearing, the trio wrote, because “they raise serious concerns with respect to the impartiality of Capitol Police leadership and its disregard for the rights of officers, members, staff, and constituents.”