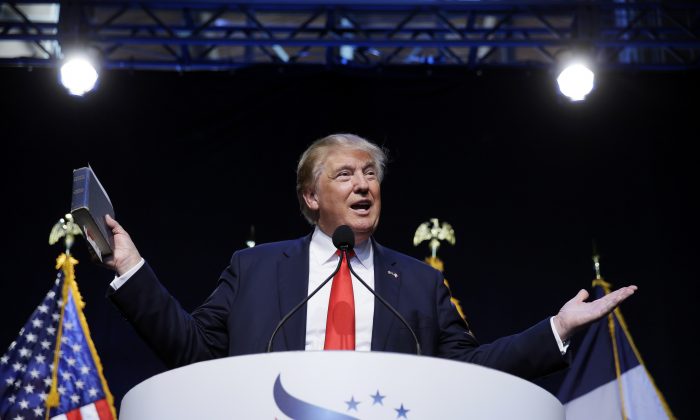 GOP Wants to Broaden Appeal; Will Candidates Get in the Way?

WASHINGTON— The Republican Party’s plan to broaden its appeal with minority groups is clashing at times with comments from some of its presidential aspirants.

Retired neurosurgeon Ben Carson says he believes that Islam is inconsistent with the Constitution and “I would not advocate that we put a Muslim in charge of this nation.”

Carson’s comments, aired Sunday on NBC’s “Meet the Press,” brought a quick rebuke from the head of the Democratic National Committee and a major advocacy group for Muslims, the Council on American-Islamic Relations, which noted that the Constitution expressly bars a religious test for those seeking public office.

“You cannot hold these kinds of views and at the same time say you will represent all Americans, of all faiths and backgrounds,” said Ibrahim Hooper, the group’s spokesman.

For GOP leaders, the 2016 campaign offered a chance at redemption and a fresh pitch to minorities, gays, women and others beyond their traditional core supporters.

After a blistering examination of the 2012 election, a report commissioned by Republican National Committee Chairman Reince Priebus concluded, “If our party is not welcoming and inclusive, young people and increasingly other voters will continue to tune us out.”

To be sure, candidates Jeb Bush and others have disavowed some of that rhetoric or tried to stake out more moderate positions. It can be tough, though, to avoid getting drowned out by language sure to stir up people.

Front-runner Donald Trump has stirred passions on illegal immigration to the point that Priebus asked him to tone down his rhetoric. Trump declined last week to correct a town hall participant who inaccurately stated that President Barack Obama is a Muslim. For Trump, the election of a Muslim president was “something that could happen. Would I be comfortable? I don’t know if we have to address it right now.”

After Trump’s town hall, Bush made clear that he would not fuel the conspiracy theories about Obama’s religion. “He is an American, he is a Christian,” the former Florida governor said Friday.

Texas Sen. Ted Cruz, who taped Sunday an episode of Iowa Press, an Iowa Public Television program, was asked if he agreed with Carson’s statements on Muslims being president. “The Constitution specifies that there shall be no religious test for public office, and I am a constitutionalist,” Cruz said.

And an exasperated Sen. Marco Rubio, R-Fla., told ABC’s “This Week” that “these issues have been discussed ad nauseam over the last few years. It’s a big waste of time. Barack Obama will not be president in a year and a half. It’s time to start talking about the future of America.”

“And guess what? I just went to a wedding of a friend of mine who happens to be gay,” he added. “Because somebody doesn’t think the way I do doesn’t mean that I can’t care about them or I can’t love them.”

Still, the rhetoric has provided an opening that Democrats are ready to try to exploit.

“Of course a Muslim, or any other American citizen, can run for president, end of story.” said Rep. Debbie Wasserman Schultz, who leads the Democratic National Committee. “To think otherwise is not only harmful to our political process, but it elevates and validates discrimination in this country.”

Steve Schmidt, who served as Republican Sen. John McCain’s top strategist in the 2008 presidential election, said it’s problematic for the GOP to be seen as intolerant, particularly with moderate voters who help sway the general election.

“Of course it’s worrisome if you have a party that’s perceived as anti-Latino, anti-Asian, anti-gay, intolerant of Muslims,” Schmidt said.

Asked specifically about Carson’s comments on NBC, Schmidt said it exposed him as an amateur politician and underscored his “total lack of understanding about the American political system.”

Kevin Madden, who worked for GOP presidential nominee Mitt Romney’s 2012 campaign, said the Republican field is expanding the base, despite some of the high-profile missteps.

“There are over a dozen candidates running for president right now who are shaping the profile of the party, and for everyone who promotes a view outside the mainstream, there are many more promoting views and policies focused on unifying the country and broadening the party’s appeal,” Madden said.