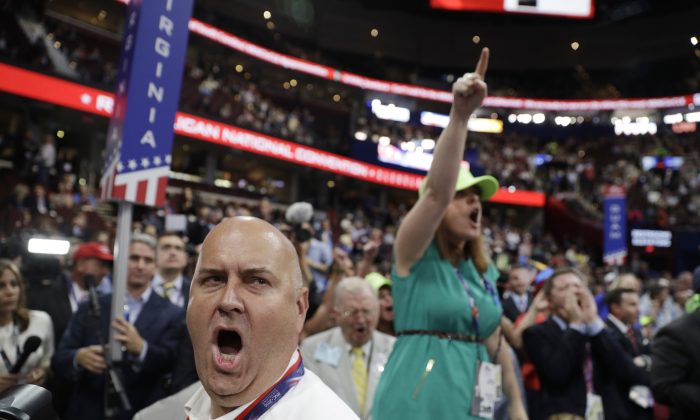 Illinois delegate Christian Gramm, left, and other delegates react as some call for a roll call vote on the adoption of the rules during first day of the Republican National Convention in Cleveland, Monday, July 18, 2016. (AP Photo/John Locher)
Politics

A rough-and-tumble first day of the Republican National Convention ended on a softer note as Donald Trump’s wife, Melania, offered a loving defense of her husband.

It was a rare warm moment on a day when Republicans were focusing on what they see as threats to America under a Democratic White House — and when the party’s infighting was on display in a clash between Trump’s supporters and opponents at the Cleveland convention.

The evening, themed “Make America Safe Again,” opened with a series of speeches from family members of people killed while serving in the military or at the hands of people in the United States illegally. But that was briefly interrupted by Trump, in an unusual appearance by a presumptive nominee, and his wife, who promised her husband would be inclusive. “If you want someone to fight for you and your country, I can assure you, he is the guy,” she said.

But her well-received address was marred by two passages with similarities to a speech first lady Michelle Obama delivered at the 2008 Democratic convention.

Trump’s campaign responded in a statement that said her “immigrant experience and love for America shone through in her speech.” The statement didn’t mention Mrs. Obama. “In writing her beautiful speech, Melania’s team of writers took notes on her life’s inspirations, and in some instances included fragments that reflected her own thinking,” Trump spokesman Jason Miller said.

What to know about the first day of the convention:

In the main event of the evening, Mrs. Trump gave a personal speech that detailed her growing up in Slovenia and praised her husband.

“He is tough when he has to be, but he is also kind and fair and caring,” she said.

Donald Trump had promised a “monumentally magnificent” display at the convention, and he didn’t disappoint as he emerged, Hollywood-style, through a fog to introduce his wife. “We’re going to win, we’re going to win so big,” he said.

In more somber speeches, Republicans highlighted at length the deadly 2012 attacks on Americans in Benghazi, Libya, while Hillary Clinton, the presumptive Democratic nominee, was serving as secretary of state.

TROUBLE ON THE FLOOR

Earlier in the day, party divisions were exposed when delegates opposing Trump demanded a roll call vote to approve convention rules. Some delegates left the convention floor after the convention’s presiding officer, Arkansas Rep. Steve Womack, shut down the opponents by saying the rules had been approved by a voice vote.

The opponents shouted “Call the roll, call the roll,” as Trump supporters and party loyalists chanted back “USA! USA!”

The dissident delegates had earlier collected enough signatures on petitions to force a roll-call vote, but Trump supporters persuaded some delegates to remove their names.

Uniting the crowd was scorn for Clinton. Convention speakers relentlessly painted her as entrenched in a system that fails to keep Americans safe.

Trump’s team insists that the party will end the week united in their mission to defeat Clinton. But Trump and his campaign officials undermined their own effort Monday by picking a fight with Ohio Gov. John Kasich, who is not attending the convention and has yet to endorse Trump. Campaign manager Paul Manafort called Kasich “petulant” and said the governor was “embarrassing” his party in his home state.

In an interview on Fox’s “The O’Reilly Factor” Monday evening, Trump said Kasich should have attended “from the standpoint of honor.”

House Speaker Paul Ryan continued to take shots, as well: “He’s not my kind of conservative,” he said of Trump at one convention event.

Trump’s supporters and his opponents held rallies outside the convention hall in a mostly peaceful start to the convention week. No major clashes were reported between pro- and anti-Trump forces during the two biggest demonstrations on Monday’s schedule or at rallies held in the later afternoon and early evening.

“So far, so good,” Cleveland Police Chief Calvin Williams said at a Monday night press briefing. Williams said there had been no violence and no property damage.

About a dozen Trump backers showed up with handguns strapped to their belts as allowed under Ohio law. Blocks away, protesters shouted about police mistreatment.

The deadly truck attack in France and the ambush killings of five police officers this month in Dallas and three more in Baton Rouge, Louisiana, over the weekend heightened fears of bloodshed. About 600 Cleveland officers were assigned to convention security duty along with thousands of officers from other agencies.

The party also adopted a platform that Christian conservatives are cheering as the most conservative statement of party policy principles in recent memory. It reaffirms the party’s opposition to gay marriage and bathroom choice for transgender people.

And there’s new language condemning same-sex parenting: “Children raised in a traditional two-parent household tend to be physically and emotionally healthier, less likely to use drugs and alcohol, engage in crime or become pregnant outside of marriage.”

The party’s platform represents the GOP’s formal policy positions for the next four years. The document serves as guidance for Republican leaders across the nation, but is not binding.

THE REST OF THE WEEK

The roll call vote on the nomination is expected Tuesday, with Trump scheduled to close the convention with an acceptance speech Thursday night. Vice presidential pick Mike Pence, the Indiana governor who left Indianapolis for Cleveland on Monday, is to speak Wednesday.

The focus shifts Tuesday to jobs. Trump children Tiffany and Donald Jr. plan to speak, as does Ryan and New Jersey Gov. Chris Christie, whom Trump passed over as a choice for running mate. Pence will headline the Wednesday session that focuses on how to “Make America First Again.”

Daughter Ivanka Trump will introduce her father on Thursday, the convention’s final day.

What political news is the world searching for on Google and talking about on Twitter? Find out via AP’s Election Buzz interactive.