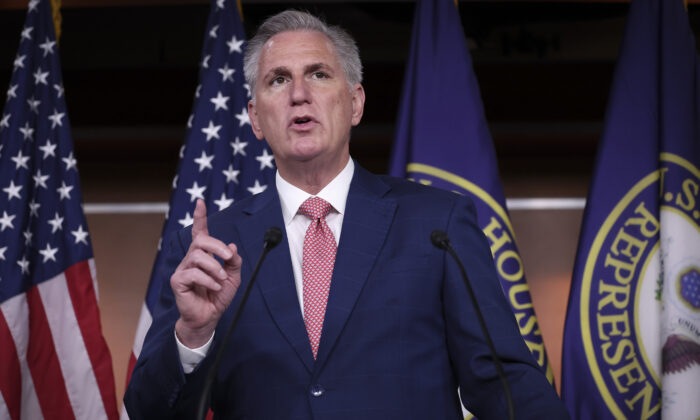 Republicans will immediately move to reverse the Biden administration’s hiring of 87,000 IRS agents if they flip the House of Representatives in the upcoming midterm elections, the top Republican in the lower chamber said on Sept. 23.

“On that first day that we are sworn in, you will see that it all changes,” House Minority Leader Kevin McCarthy (R-Calif.) told a crowd in Pennsylvania. “Because in our very first bill, we are going to repeal 87,000 IRS agents.”

“Our job is to work for you, and not go after you,” he added.

The Inflation Reduction Act, approved by Democrats in both chambers and signed by President Joe Biden, included funding for 87,000 additional IRS workers.

“In all of my years in Congress, I have not had a phone call from anyone saying ‘Steve, please add more people to the IRS,'” House Minority Whip Steve Scalise (R-La.) said at the Pennsylvania event, dubbed the “Commitment to America.”

“If there are 87,000 people needed in America, it’s at the border to secure America’s border. Not at the IRS to go after small businesses and hard-working families,” he added.

Senate Republicans introduced a bill earlier this month that would block the IRS from using the new funding to audit Americans making less than $400,000 annually.

Without support from the Senate, any House bill wouldn’t advance to Biden. Additionally, Republicans in both chambers would need to summon a veto-proof majority, which would likely mean getting Democrat support.

In a competing event, House Majority Leader Steny Hoyer (D-Md.) said in Pennsylvania that Democrats were proud of passing the Inflation Reduction Act. He described the legislation as bringing down the costs of healthcare and energy, funding new jobs, and dealing with climate issues.

McCarthy noted that costs for everyday goods have spiked under Biden, as has crime in many Democrat-run cities.

“The Democrats have no plan. If you trust us, hold us accountable. We will help the entire country. We will do this country,” he said.

“What I see and hear from my constituents is people are struggling. Families are struggling to make ends meet. Whether you go to a grocery store, whether you are budgeting in preparation for those heating bills that are skyrocketing this winter, or whether you struggled this past year to fill up your tank of gas. People feel they are working harder than they ever had to before, but they are falling further behind. And the American people are smart. They know that it’s a direct result of the failed policies of one party Democrat rule in Washington,” House Conference Chairwoman Elise Stefanik (R-N.Y.) said. “And there is a better way. We are here to help, and this is our commitment to America. These ideas came from the American people.”

Hoyer said the plan is “long on slogans and short on details,” adding, “That’s because the true details of Republicans’ agenda are too frightening for most American voters.”