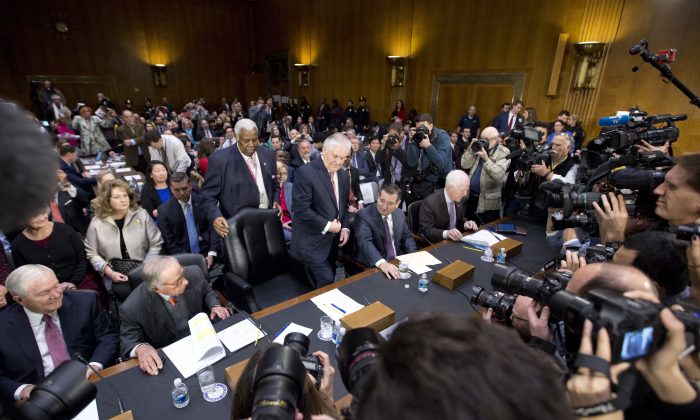 WASHINGTON—Republicans muscled through committee approval of President Donald Trump’s nominees for Treasury and Health on Wednesday, suspending a key Senate rule in the latest escalation of partisan tensions in Congress.

Democrats boycotted a Finance Committee meeting and Republicans responded by temporarily scuttling a rule requiring at least one Democrat to be present for votes. The committee then approved Rep. Tom Price, R-Ga., to become Health secretary and financier Steve Mnuchin to be Treasury secretary by a pair of 14-0 votes.

Separately, the Senate planned to vote later in the day on Trump’s nomination of Rex Tillerson for secretary of state after several Democrats crossed party lines to back the former Exxon Mobil CEO.

The vote on Tillerson comes as tension builds among congressional Republicans and Democrats over Trump’s executive order on immigrants and refugees.

But Democrats lack the numbers in the Senate to block Tillerson from becoming the nation’s chief diplomat. Republicans hold a four-seat advantage and during a procedural vote Monday on the nomination, Democrats Joe Manchin of West Virginia, Heidi Heitkamp of North Dakota and Mark Warner of Virginia cast their ballots for Tillerson. They’re unlikely to change their minds.

Sen. Angus King, a Maine independent who caucuses with the Democrats, also supported Tillerson. The nomination needs only a simple majority to be confirmed.

The opening days of the Trump administration have seen little of the honeymoon period new presidents usually experience. The chief battleground has been Trump’s executive order temporarily blocking refugees from entering the country and anyone from seven Muslim-majority nations the Obama administration had named “countries of concern.”

With liberal groups pressing them to fight Trump, Democrats used delaying tactics on Trump nominees on Tuesday. It’s one of their limited weapons as the congressional minority to hamper the GOP.

Democrats said there were unresolved questions about the financial backgrounds of Price and Mnuchin.

If confirmed by the full Senate, Price would lead Republican efforts to erase former President Barack Obama’s health care overhaul. Democrats cited a newspaper report that officials of an Australian biomed company said Price received a special offer to buy their stock at a reduced cost, despite Price’s congressional testimony that the offer was available to all investors.

Democrats also said a bank run by Mnuchin used a process for handling home foreclosures that critics have associated with fraud.

Both men and congressional Republicans said they’d done nothing wrong.

Several other votes were planned Wednesday to get Trump nominees approved by committees, clearing them for confirmation in the full Senate.

The Senate Judiciary Committee intended to vote on Trump’s nomination of Alabama Sen. Jeff Sessions to serve as attorney general. Democrats scuttled a planned vote Tuesday in the wake of Trump’s decision to fire Acting Attorney General Sally Yates. Several Democrats said they had no confidence Sessions would be able to stand up to Trump.

A vote also was planned in the Senate Environment and Public Works Committee on Scott Pruitt, Oklahoma’s state attorney general in line to lead the Environmental Protection Agency.

In his current position, Pruitt has frequently sued the agency he hopes to lead, including a multistate lawsuit opposing the Obama administration’s plan to limit carbon emissions from coal-fired power plants.

Pressed by Democrats in his Senate confirmation hearing in January, however, Pruitt said he disagreed with Trump’s earlier claims that global warming is a hoax created by the Chinese to harm the economic competitiveness of the United States.

“I do not believe climate change is a hoax,” Pruitt said.