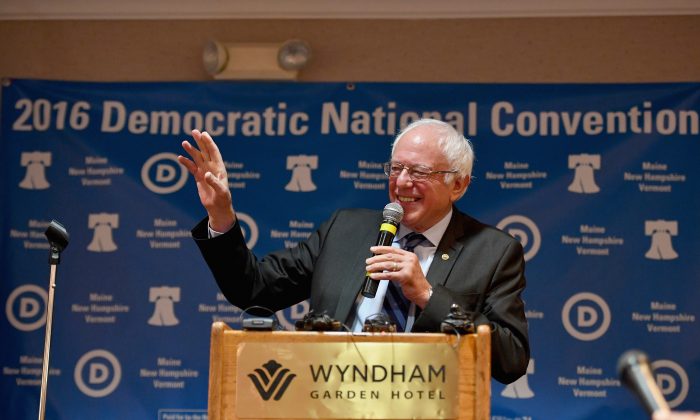 WASHINGTON—Sen. Bernie Sanders (I-Vt.) is among Saudi Arabia’s staunchest U.S. critics, but two of the principals in a media firm—who were paid $80 million by his 2016 presidential campaign—also work for a foreign agent close to the Middle East regime.

The $80 million in payments were made to Old Towne Media in Alexandria, Virginia, the largest single vendor for the Sanders campaign.

“Old Towne Media has not recorded payments from any other campaign committees since that time, a search of Federal Election Commission filings shows,” according to the Washington Free Beacon’s Joe Schoffstall, who broke the story Feb. 20.

“The firm was a ‘front company’ for the Washington-based Canal Partners Media, a media company where two of its top partners, Shelli Hutton-Harting and Barbara Abar, were tied to past controversies involving Sanders’s wife, Jane,” Schoffstall reported.

Canal Partners Media received a $20,000 commission in 2017 on an ad buy valued at $138,000 on behalf of the Saudi American Public Relation Affairs Committee (SAPRAC), which is run by Salman al-Ansari, a Saudi businessman, Schoffstall said.

The SAPRAC connection exists despite Sanders’ repeated criticism of Saudi Arabia, especially for its role in the civil war currently ravaging its neighbor to the south, Yemen.

Sanders announced Feb. 19 that he is again running for the Democratic presidential nomination, despite being elected to the Senate from Vermont as an independent.

“Fifty million dollars is not a small sum of money, but let us not forget that it is 10 percent of what the crown prince paid for a yacht,” Sanders said, according to Israeli media.

Sanders pushed unsuccessfully in November for the Senate to approve a measure ending U.S. support for the Saudis in the civil war.

During his push, the Vermont senator said on Twitter: “No more! Enough death. Enough killing. Enough destruction. The time is now to tell Saudi Arabia that we are not committing to partner with them in this horrific crisis.”

Americans for Limited Government President Richard Manning, for example, told The Epoch Times that Sanders’ “close political campaign connections with a firm closely tied to Saudi interests shows that the self-described socialist from Vermont is up to his eyeballs in swamp water.”

Manning said he wasn’t surprised that “the ultimate big government guy” is deeply “immersed in the D.C. morass, but it certainly doesn’t fit well with his outsider image.”

But another GOP strategist who asked that his name not be published, told The Epoch Times that “politics make strange bedfellows. Sometimes, political firms have different clients and sometimes, there might be a conflict of interest there. This isn’t a unique problem in the industry, and both sides do it.”

Multiple Democratic campaign advisers and strategists approached by The Epoch Times for comment on the Sanders story declined to do so.

Only Jim Manley, the former spokesman for then-Senate Majority Leader Harry Reid (D-Nev.) commented, but offered only a terse warning that “Republicans trying to make hay out of this should go back and read what happens to those who throw stones in glass houses.”

For the moment at least, Sanders’ latest presidential campaign seems to be off to a solid start, despite the Schoffstall story. A Rasmussen Reports survey made public Feb. 22 found that 56 percent of likely Democratic voters believe it is at least somewhat likely that Sanders will win the 2020 Democratic presidential nomination.