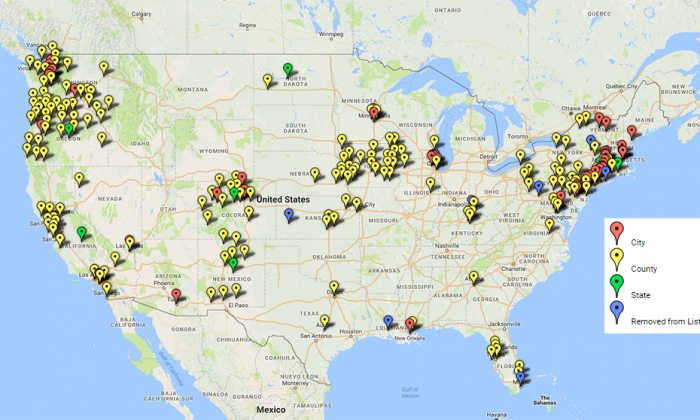 Several states that had a majority of Republican voters during the last presidential election moved to introduce legislation to block state funding to so-called “sanctuary cities.”

“What he’s doing is a great idea. We need to protect Americans, we need to protect Tennesseans,” state Sen. Mark Green, the creator of his state’s version of the sanctuary city ban, told The Hill, referring to Trump’s order. “We’re going to take it a step further and enhance what the president is doing and take state dollars from cities that decide, because they want to, to ignore ICE detainers.”

In Florida, a proposal would require officials to report potential violations to the state attorney general or be expelled from office, and, meanwhile, the bill would fine local governments up to $5,000 per day for keeping the sanctuary measures in place.

Texas Gov. Greg Abbott, a Republican, moved to block some $1.8 million in funding state grants to Travis County, which has the capital, Austin. A local sheriff implemented sanctuary measures.

“I will not tolerate sanctuary city policies that put the citizens of Texas at risk,” Abbott said on Thursday. “Elected officials do not get to pick and choose which laws they will obey.”

But several cities have filed lawsuits against Trump’s executive order on sanctuary cities—the city of San Francisco being one of them.

“The president’s executive order is not only unconstitutional, it’s un-American,” City Attorney Dennis Herrera said last month. “This country was founded on the principle that the federal government cannot force state and local governments to do its job for it, like carrying out immigration policy. I am defending that bedrock American principle today.”

Boston also filed a lawsuit against the Trump orders.