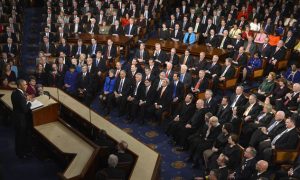 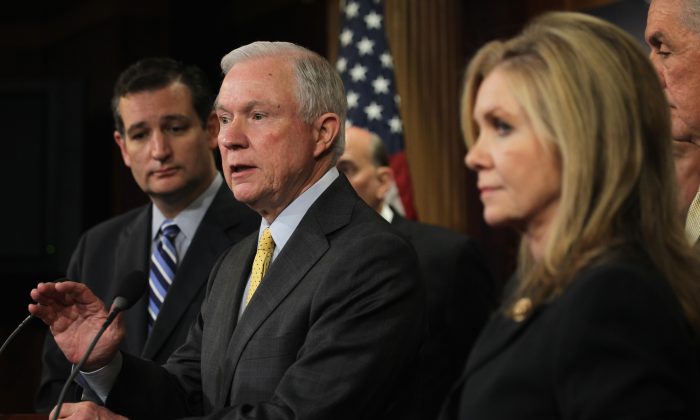 In response to State of the Union, an opportunity was missed
By Jonathan Zhou
biggersmaller
Print

After the president’s State of the Union Address on Tuesday, Republicans delivered a number of diffuse responses that put on display once again the division between the party leadership and tea partyers on the issue of immigration.

In the offical GOP response, Sen. Joni Ernst (R-Iowa) made no mention of immigration, whereas the tea party rebuttal by Rep. Curt Clawson (R-Fla.) addressed the issue head-on. He even punctuated his speech with a line in Spanish that underscored the sanctity of the nation’s immigration laws.

“We all believe in God, the family, hard work, and liberty. The law must be followed. You are all welcome with us. We are all equal. Of course. Our house is your house,” Clawson said in Spanish.

“As we respect our immigration laws–we’ve also got to be fair to the more than 10 million Americans currently struggling to find good jobs! We all know who they are. They are our friends, family, and neighbors,” Clawson continued in English. “To do this, we need to secure our borders first! This is important for fairness–and security–for all Americans.”

We all believe in God, the family, hard work, and liberty. The law must be followed.
— Rep. Curt Clawson

In January, the White House and Congress was already in a standoff over how to fund the Department of Homeland Security past February. House Republicans attached a provision to a bill that would defund the president’s November immigration order, which they said amounts to an unconstitutional power-grab by the executive. The president has promised to veto the bill in kind.

Now, Congress could find itself again in a gridlock over immigration reform.

On Tuesday, Sen. Jeff Sessions (R-Ala.) attacked an immigration-related legislation still being marked up in the House as further undermining border security.

The Secure Our Border First Act of 2015, introduced by Homeland Security Chairman Michael McCaul (R-Texas) would give more funding for border security, but Sessions said it in fact undermines it.

“One of the most dramatic ways in which the president has undermined immigration enforcement is by ordering agents to release apprehended illegal border-crossers by the tens of thousands. Yet the pending legislation does nothing to end this endemic practice of catch-and-release, ensuring large amounts of illegal immigration will continue unabated,” Sessions said in a statement.

“[Sessions’ opposition to the bill] shows the tension within the Republican Party, you’ve got some member who want to be accommodating on immigration because they want to attract the Latino vote for 2016, whereas others are firmly anti-immigrant and want to focus soley on strengthening our borders and deporting as many illegal immigrants as possible,” said Stephen Yale-Loehr, a professor of law at Cornell University with a focus on immigration.

Sessions, one of the most vocal critics of the president’s immigration policies, will reportedly chair the Senate Subcommittee on Immigration and with it, be able to block immigration bills he disapproves of.

“Generally the immigration sub-committee is the key committee for immigration legislations,” Yale-Loehr said. “Sessions could make sure it never gets to the floor, more likely he would amend it to make it what he thinks should be the final bill and see if that gets through the Senate, that’s a whole different dynamic.”

Yale-Loehr says that if there’s “any hope” for immigration reform in the next two years, it would be in “bite-size packages” and won’t resemble the comprehensive Gang of Eight Senate bill from 2013, but the chance of step-by-step reform is still slim.

Earlier this year, Sessions had circulated an Immigration Handbook in Congress that outlined an immigration strategy for the new Congress, where he denounced the direction of recent immigration reform wholesale.

“Those who suggest the only problem with the ‘Gang of Eight’ bill was that it was ‘comprehensive’ instead of ‘piecemeal’ are missing the point. Whether in one part, five parts, or ten, the underlying policy would have been no less disastrous,” Sessions wrote.