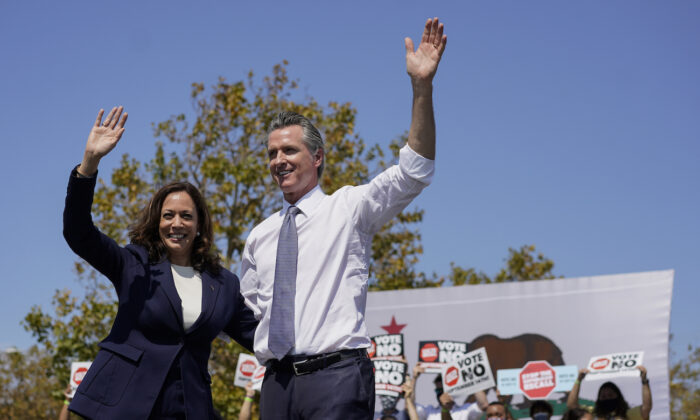 Give credit where it’s due. Sure, Democrats outspent Larry Elder and the pro-recall side 10-to-1, about $200 million to $20 million.

But the real key to beating the recall was the Democrats’ impressive political machine. Republicans should learn from it, much as Democrats in the late 1980s learned from the Reagan victories how to defeat George H.W. Bush in 1992 (direct mail, working-class issues, party discipline).

Let’s look at some of the Dem tactics from 2021 Republicans should emulate beginning in 2022.

In 2003, when Gov. Gray Davis was recalled, Lt. Gov. Cruz Bustamante, also a Democrat, ran a silly “No on Recall, Yes on Bustamante” campaign. He got 31.5 percent to winner Arnold Schwarzenegger’s 48.6 percent. Cruz never had a chance, but was an annoyance who took up a lot of media space.

Nothing like that happened in 2021. The Democrat who scored the highest among the 46 replacement candidates was Kevin Paffrath, with 9.8 percent to the 47 percent of Larry Elder, the Republican who got the most votes. Paffrath is a gadfly YouTuber on real estate whom few outside his niche had heard of before. He had no effect on anything but to increase the exposure of his YouTube channel.

By contrast, Republicans were not united, even after Larry Elder emerged as the clear leader among the recall candidates. I attended the Epoch Times’ Sept. 17 “California After the Recall” event featuring Elder and former state Sen. John Moorlach, whose writeup is here. Video of the live interview of them by ET Senior Editor Jan Jakielek is here.

Elder pointed out that the other Republican candidates kept attacking him instead of Newsom, while he never criticized the other candidates until that very night. While listening, I was wondering why John Cox, having lost 2-to-1 to Newsom in 2018, even was in the race wasting more millions. But he stayed on to the end, getting 4.4 percent, while wasting at least $11 million.

He and other Republican rich folks should look to how Silicon Valley billionaires don’t run for office, but bankroll favored candidates.

If Republicans are serious about winning, instead of running hobby campaigns, they need to bring back Reagan’s 11th Commandment: Thou shalt not speak ill of any fellow Republican.

2. Party Discipline, Part 2. Trick question: What percentage of the vote did the California Republican candidate get for the U.S. Senate race in 2018? Answer: 0 percent. Because the Republicans were divided so much in the jungle primary the Top Two were Sen. Dianne Feinstein and former Senate President pro Tempore Kevin de León.

In the primary five Republicans finished in places three through seven. Their combined vote: 25.5 percent. That easily would have doubled de Leon’s 12 percent.

Sure, a united GOP candidate still would have lost to Feinstein. But you can’t win elections if your party’s candidate and name don’t even appear on the ballot.

The Top Two scheme is an anti-democratic abomination foisted on the state by Gov. Arnold Schwarzenegger, as I wrote in The Epoch Times on Sept. 1. But although the GOP should target its repeal for a future initiative, it’s not going away any time soon.

Like the Democrats, the party has to unite around one candidate for each election. That’s obvious, but they haven’t been doing it. As Orwell said, “To see what is in front of one’s nose needs a constant struggle.”

3. Money. Democrats know how to raise it. Admittedly it will be tough getting close to them because they now have the Silicon Valley oligarchs in their corner. But the Dem methods should be studied.

I’ve heard Moorlach complain for years how business leaders gripe to him about how horrible the California business climate is—while giving money to Democratic candidates. Granted, it’s a way to palliate the Dems’ socialist tendencies.

But it’s like that quote attributed to Lenin, “When it comes time to hang the capitalists, they will vie with each other for the rope contract.”

As a longtime journalist, I’ve never been on the money end of anything except for paying California’s ludicrously high 9.6 percent rate income tax for the middle class. But somebody has to figure this out.

4. One issue, or at most two. The Dems ran a simple message: “Stop the Republican Recall.” A secondary message was Newsom and his genius team were saving California from the COVID menace, while Elder opposed mandatory masks and would kill children.

If there’s one complaint I have about Elder’s otherwise surprisingly good upstart campaign, it’s that he stressed too many issues. I attended a fundraiser for him on Sept. 10 at the Marriott in Anaheim and he covered: taxes, education, wildfires, crime, regulations, water, and many other issues. He’s a talk-show host and columnist, so he’s as conversant on the major California issues as much as anyone.

But that was a problem. Everyone knows the state is in a mess. So people ask, “But what can you do for me about it?” They want an “elevator speech,” not a treatise.

Going back to Reagan, in 1980 he had two issues: The Soviet menace Jimmy Carter couldn’t deal with, and the high-tax, “malaise” economy. The Gipper won.

For California Republicans today, in my Sept. 17 Epoch Times article, I recommend education. Blacks and Latinos especially know their kids are being slighted in the state’s abysmal schools. A school choice initiative could be on the ballot next year—a great idea.

A second issue could be rising crime rates.

Tax cuts just aren’t resonating now for some reason. Maybe people are inured to the pain. Or it may be the emotional pull just isn’t there for taxes the way it is for getting mugged or your kids not learning math and English.

President Joe Biden’s national problems also will resonate locally. Jimmy Carter’s problems in the 1970s left a legacy of perceived incompetence it took the Democrats a long time to shake off. Under Reagan, Republicans were the “can do” party that beat back the Soviet menace and revived the economy with tax and regulation cuts.

If Biden taints the Democrats in the same way, it would be an opportunity for Republicans in California to start winning some elections again. We sure do need an alternative to one-party rule—or misrule.

It makes sense to learn from the best. Especially if he’s your opponent.