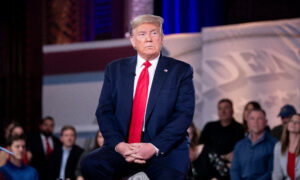 Nine Republican senators have urged President Donald Trump not to suspend certain categories of work visas during the COVID-19 pandemic, arguing that temporary foreign labor is important to both the survival of small businesses hurt by the pandemic and for a quick economic recovery.

“Guest workers are needed to boost American business, not take American jobs,” the GOP lawmakers said in a May 27 letter (pdf), which calls on the Trump administration not to suspend the issuance of H-2B and H-2A visas, among other measures.

These include a request for exemptions for employers operating in critical infrastructure industries and provisions allowing any businesses to apply for an exemption from a foreign worker restriction if they can show that their operations would suffer “irreparable harm (permanent and severe financial loss) if unable to employ the non-immigrant worker in the United States.”

The Trump administration in April suspended the issuance of additional H-2B seasonal guest worker visas, which give temporary legal status to non-agricultural workers in such jobs as landscaping and hospitality.

To clear up various misreporting – DHS’s rule on the H-2B cap is on hold pending review due to present economic circumstances. No additional H-2B visas will be released until further notice. Per the statute, H-2B allocations are set in consultation with @USDOL.

President Trump, on April 22 in the Proclamation Suspending Entry of Immigrants Who Present Risk to the U.S. Labor Market During the Economic Recovery Following the COVID-19 Outbreak, wrote, “In the administration of our nation’s immigration system, we must be mindful of the impact of foreign workers on the United States labor market, particularly in an environment of high domestic unemployment and depressed demand for labor.”

While immigration hawks have long opposed increasing H-2B visas, business groups have argued they are essential to fill jobs Americans are often unwilling or unable to perform.

In their letter, the senators argue that while the pandemic has left tens of millions of Americans out of a job, “close to 8 million American small businesses are at risk of shuttering forever,” some of which rely on temporary and seasonal guest worker visa programs to fill a labor shortfall.

Counterintuitive though it may seem when some 33 million Americans are jobless, the senators said in their letter that the businesses they seek to help by urging the Trump administration not to suspend the non-immigrant temporary visa programs rely on labor that many Americans are not qualified, able, or willing to perform.

The senators argued that the temporary and seasonal nature of the work makes it “exceedingly difficult to find American workers” even under the current economic bust. They said this dynamic is made worse by the generous unemployment insurance under the COVID-19 relief bill that “has created a disincentive for many American furloughed or laid off workers from finding new jobs,” and by the fact that many American workers expect to go back to their previous jobs once lockdowns are lifted.

The letter, whose signatories include Sens. John Cornyn (R-Texas) and Lisa Murkowski (R-Ala.), said some of these businesses operate in sectors or geographical areas that, in contrast with the overall dismal national unemployment numbers, are not experiencing high rates of joblessness.

“Over 5,000 employers across 49 states rely on the H-2B program to get needed guest workers to help keep their forestry, landscaping, seafood, and hospitality businesses open,” the senators said.

“The economic devastation that has occurred due to necessary precautionary measures taken to slow the spread of coronavirus would only be exacerbated if vulnerable businesses do not get the temporary labor they need to stay afloat,” they added.

The senators, in calling for any changes to foreign worker visa programs to be “very narrowly tailored to prevent additional damage to the already struggling American small businesses who rely on the assistance made possible through these visas,” have also requested the administration adopt a provision that would allow restrictions to be lifted quickly in industry sectors for which data shows persistent vacancies.

“As we begin to reopen and recover, we ask you cautiously approach any changes to our non-immigrant guest worker programs,” the senators wrote, adding, “Please keep American businesses, American workers, and the American economy as a whole in mind during any future actions that may limit employment based or guest worker visa programs so that we can get back to pre-pandemic levels of growth as quickly and safely as possible.”

Earlier this month, a different group of Republican senators wrote to Trump (pdf) calling for a halt in H-2B visas for up to a year or until the unemployment level falls back to a normal level.