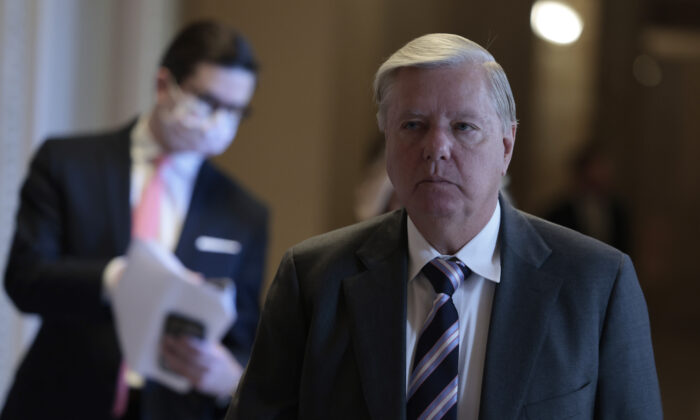 The Senate on Feb. 18 rejected an amendment to a government funding bill that would have barred funding for federal COVID-19 vaccine mandates that haven’t been blocked by courts.

Lee and fellow Republicans were optimistic because they hold a slight majority in the upper chamber since Sen. Ben Ray Lujan (D-N.M.) suffered a stroke. Additionally, Sens. Dianne Feinstein (D-Calif.) and Mark Kelly (D-Ariz.) were absent with reported family emergencies.

But four Republican senators missed the vote, dooming the measure.

Sens. Richard Burr (R-N.C.), Lindsey Graham (R-S.C.), Jim Inhofe (R-Okla.), and Mitt Romney (R-Utah) were not present when the Senate voted on Lee’s amendment and two other proposals to alter the funding bill.

Romney and Inhofe voted to advance the bill but did not vote for the rest of the day. Graham and Burr missed all the votes on Thursday.

Spokespersons for the senators didn’t respond to requests for comment. Two had automatic messages saying they were out of the office, with one indicating she was in Munich for the security conference there.

Lee and Sen. Ted Cruz (R-Texas), who offered an amendment that would have prohibited federal funding for schools and child care facilities that impose COVID-19 vaccine mandates, urged colleagues to stay in Washington, noting that Republicans held the upper hand because of the Democrat absences.

“The only way Dems win the vote is if Rs skip town,” Cruz wrote on Twitter. “Don’t!”

A simple majority would have passed the amendments, though passage of an altered continuing resolution, or the funding bill, in the Democrat-controlled House of Representatives is unlikely.

Some Republicans took note of the absences. Rep. Chip Roy (R-Texas) said the four senators “should be shamed.”

Senate Minority Whip John Thune (R-S.D.) told reporters before the votes that there would be “natural attrition” because some senators were leaving Washington to attend the Munich Security Conference.

“We don’t have a lot of control” over members leaving, Thune said.

The Senate voted in late 2021 to block funding for the Biden administration’s vaccine mandate for private employers, with Sens. Joe Manchin (D-W.Va.) and Jon Tester (D-Mont.) joining Republicans. The measure was never voted on in the House, but the Supreme Court later blocked the mandate.

Manchin and Tester were present Thursday and voted against Lee’s amendment, as did all other Democrats.

The Senate also voted down a proposed amendment from Sen. Mike Braun (R-Ind.) that would aim to balance the federal budget in 10 years.

Senators, in their final vote, approved the funding bill in a 65–27 bipartisan vote.