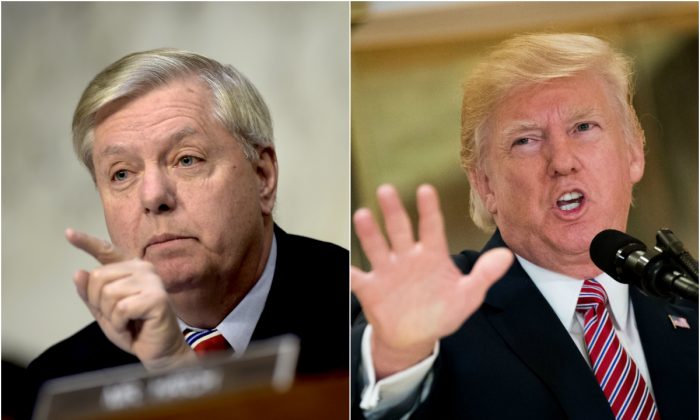 GOP Senators Led by Lindsey Graham Speak Out Against Trump’s Promise of Pardons for Jan. 6 Defendants

A group of GOP senators led by Sen. Lindsey Graham (R-S.C.) expressed opposition to a suggestion by former President Donald Trump that he would pardon Jan. 6 defendants if he returned to the Oval Office in 2025.

Trump has on several occasions decried the treatment of Jan. 6 defendants and hinted at the possibility of a presidential pardon.

During a Sept. 1 appearance on the show of Wendy Bell, a conservative radio host, Trump said he would both pardon and apologize to his supporters who had faced legal action in the aftermath of Jan. 6.

“I mean full pardons with an apology to many,” Trump said.

Several members of his party, however, have expressed opposition to the proposal.

In a Sept. 12 report by The Hill, Graham said that pardons for Jan. 6 defendants are “a bad idea.”

“Pardons are given to people who admit misconduct, rehabilitate themselves. They’re not supposed to be used for other purposes,” Graham argued.

“I don’t think potential candidates should hold pardons out as a promise,” said Cramer to The Hill. “It’s somewhat problematic for me on a moral level and an ethical level—sort of like promising other giveaways to particular individuals. I prefer avoiding those kinds of things.”

“If he were elected, he would have a constitutional ability to do it,” Sen. Mike Rounds (R-S.D.) said of potential pardons. “I would disagree with it. I think there was insurrection and I think these folks need to be punished.

“I was there. This was truly violent. People were injured, people were killed. I have very little mercy for the individuals that were involved in that activity that day,” Rounds told The Hill.

“The only people that get pardoned are people who are charged with crimes. If they were charged with crimes, they ought to be prosecuted like everybody else,” Senate Republican Whip John Thune (R-S.D.) told The Hill. “The rule of law applies. If people broke laws, they need to be held accountable.”

Sen. Mitt Romney (R-Utah) has also come out against the proposal.

“The Jan. 6 riot was an attack on the temple of democracy, and the people who violated the law, attacked our law enforcement and besmirched our nation’s Capitol should be prosecuted according to the law, and certainly should not be pardoned,” Romney said in The Hill’s report. “It’s a grossly inappropriate comment to make.”

Though Trump remains an influential force among Senate Republicans, many GOP senators have been largely tight-lipped about the Jan. 6 “Stop the Steal” rally.

Trump has feuded publicly with a handful of Senate Republicans—most notably with Senate Minority Leader Mitch McConnell (R-Ky.)—but most have been anxious to avoid striking too critical a tone against the former president because of his continued influence in the party.

Trump’s comments musing on pardoning several Jan. 6 defendants fit into a larger debate over the treatment of these detainees.

In an interview with The Epoch Times, Cynthia Hughes, founder of the Jan. 6 defendant advocacy group Patriot Freedom Project, discussed the “despicable” conditions that have been faced by her nephew, a nonviolent offender arrested in the DOJ roundup of Jan. 6 defendants after the rally.

After entering the D.C. jail in January 2021, Hughes’s nephew, Tim Hale-Cusanelli, and other Jan. 6 defendants were held in solitary confinement and only allowed outside of their cells one hour per day, Hughes said.

Defendants still “don’t get to go outside, they don’t get to see the sun,” she added. “I anticipate many will have serious health issues.”

“If you have a medical problem, you’re not seeing a doctor,” she continued. “Tim has had two very significant ear infections, so bad that it caused bleeding from the ear, and he never got to see a doctor. He got to see a nurse practitioner, and they flushed his ear out with peroxide and gave him some penicillin.

“He’s got significant hearing loss in both of his ears right now,” Hughes added.

Hughes described other conditions faced by detainees as well.

Until “very recently,” Hughes said, detainees who met with their lawyers were confined to solitary confinement for two weeks, purportedly on grounds of COVID. However, she believes the measure was more intended to be punitive than anything.

Detainees have faced other indignities as well: “Lots of strip search, their cells get raided, they’re mocked, they’re spoken down to, you can’t mail packages [to detainees].”

She added, “I think the biggest thing of all that people should know: they’re denied religious services.”

Pardon Has Some GOP Supporters

Against prominent voices like Graham and Romney, who oppose a pardon, not every Republican in the Senate has been so quick to dismiss the suggestion.

Sen. Josh Hawley (R-Mo.), one of Trump’s most consistent allies in the upper chamber, said that he would conditionally support some Jan. 6 pardons to counter the Department of Justice’s (DOJ) wide-reaching prosecutorial push against Jan. 6 participants.

“Let’s see which ones he would choose to do,” Hawley said in The Hill report. “There’s no question it has been a massive prosecutorial effort.”

Hawley continued, citing concerns over the wide net cast by the DOJ since the federal government began rounding up Jan. 6 participants in 2021.

“I think that the folks who committed crimes, particularly violent crimes, on that day ought to be prosecuted,” Hawley opined. “I think the question becomes, are there people who’ve been caught up in this drag net who, for instance, didn’t know that they were trespassing?

“There’s a lot of concern about, frankly, the double standard at [the Department of Justice] going after people who may have at most trespassed on federal property and not even known they did it versus folks who have, in [Black Lives Matter] riots, committed violent crimes and not been prosecuted,” he said. “There absolutely is undeniably a double standard.”

Sen. Ted Cruz (R-Texas), who joined Hawley in January 2021 in objecting to the certification of electoral slates from contested battleground states, expressed the same sentiments to The Hill, drawing a distinction between those who perpetrated violence that day and those who were peaceful. People from both camps have been pulled into DOJ custody since 2021.

The DOJ “turns a blind eye” to the violence of rioters and looters who destroyed businesses and set fire to American cities in 2020, but the agency eagerly targets those who dare to speak out on the other side, he said.

“This past week it got so bad that Joe Biden, bathed in red light, decreed that half the nation are fascists because they dare to disagree with his socialist policies,” Cruz said. “What DOJ is doing, targeting the political enemies of the White House, is corrupt and incredibly harmful.”

Several Republicans in the House who have advocated for these defendants have distinguished nonviolent from violent offenders. Because the protestors technically were not legally permitted to enter the Capitol, many of those arrested were charged only with trespassing.

Trump’s comments on potential pardons do not make clear whether he would grant a blanket pardon or targeted pardons that would hinge on the nature of the crimes the defendants were charged with. In their comments, Hawley and Cruz seemed to suggest that they favored, or at least did not necessarily oppose, pardons for nonviolent offenders.