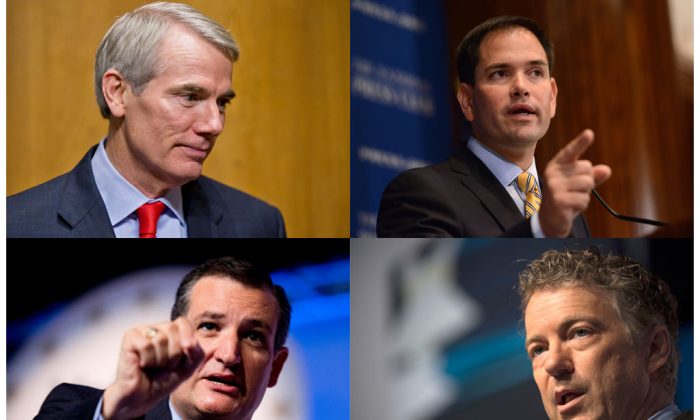 WASHINGTON—Now that their party has seized the Senate and faces the pressure of governing, an ambitious group of first-term Republicans may try to use that new majority status, and the opportunities it brings, as a springboard to the presidency in 2016.

While many sitting senators have tried to make that jump, Barack Obama is the only one to accomplish that in the past half-century.

That history doesn’t seem to be deterring at least four from trying to capitalize on their party’s success in the midterm elections for possible runs for national office: Rand Paul of Kentucky, Marco Rubio of Florida, Ted Cruz of Texas and Rob Portman from Ohio.

Each represents a different strain within the GOP.

Cruz, for example, is the tea partyer elected in 2012 who led the GOP through the last government shutdown. Rubio, voted in two years earlier, is a foreign policy hard-liner who supports a path to legal status for immigrants who are in the United States illegally.

As leadership opportunities grow with the GOP gaining the majority come January, each is working to bolster his case for those presidential ambitions.

“It is critical now that Republicans have won a majority that we stand up and lead,” Cruz said as lawmakers returned to Capitol Hill this past week for a postelection session. “We have an opportunity to demonstrate bold, principled leadership.”

Primary contests in Iowa and New Hampshire are little more than a year away, and prospective candidates in both parties are nearing decisions about whether to run.

Hillary Rodham Clinton remains the overwhelming Democratic front-runner, if she gets in, while more than a dozen Republicans are considering the race. In addition to the four senators, that list includes former Florida Gov. Jeb Bush, and Govs. Chris Christie of New Jersey and Scott Walker of Wisconsin. They are promoting the inherent advantages that state leaders have over those elected to a Congress suffering from gridlock and anti-Washington sentiment.

That dynamic is forcing senators who are would-be candidates to distance themselves from the very institution they serve.

“I have taken the strong position that this place is broken,” Portman told The Associated Press while walking through the Capitol last week. “Whether I’m running for re-election in Ohio or running for national election, I’ll continue to express my strong view that Washington is letting down the rest of the country.”

Portman served four terms in the House before winning election to the Senate in 2010.

An early showdown over immigration, and the prospect of a second government shutdown in two years, will showcase differences between the ambitious senators.

Like most Republicans, Rubio opposes Obama’s plans to issue an executive order before year’s end that may shield from deportation about 5 million immigrants who are living in the United States illegally.

“The quandary is, what option do we have to stop it that isn’t counterproductive? Ideally, you would be able to not fund it in the budget, but doing so could threaten shutdown,” Rubio said in an interview. He said the American people do not need to suffer through the “shock” of another government closure.

Rubio’s team thinks his failed immigration efforts ultimately will help his standing with Hispanic voters. In the coming month, the senator plans to outline a policy agenda that will include an alternative for Obama’s health care overhaul.

Cruz is not ruling out another government closure, and his supporters note that voters did not punish Republicans this fall for the 2013 shutdown that furloughed more than a million workers and closed national parks for more than two weeks.

The Senate’s top Republican, Sen. Mitch McConnell of Kentucky, has pledged that there will not be a shutdown. But Cruz has achieved hero status among conservative activists for his willingness to take on party leaders.

The libertarian-minded Paul, elected in 2010, is trying to harness energy from the tea party movement while broadening his appeal enough to win a national election.

He met privately with advisers in Washington last week to chart a road map for the coming months. A spokesman said the meetings were focused on “fundraising performance, grassroots engagement, communications and outreach” and included dozens of supporters from across the country.

Instead of backing a broad spending bill that would keep the federal government funded through next fall, Paul wants his party to approve individual ones to have more direct control over the administration.