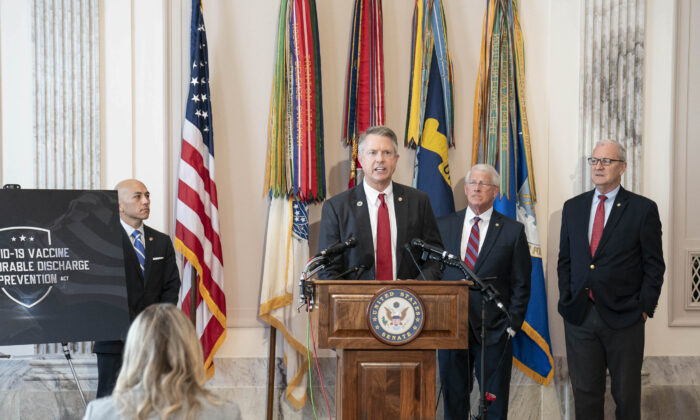 Senator Roger Marshall (R-Kan.) calls for members of the military who chose to not get the COVID-19 vaccine to not be dishonorably discharged during a news conference in the Russell Senate Office Building on Capitol Hill, Washington, D.C. on Nov. 4, 2021. (Sarah Silbiger/Getty Images)
National Security

A group of GOP senators criticized the Biden administration’s vaccine mandate while seeking a ban on dishonorable discharge directives for unvaccinated service members.

The senators also discussed the COVID-19 Vaccine Dishonorable Discharge Prevention Act—a bill Marshall introduced in September to prohibit dishonorable charges for service members not receiving a COVID-19 vaccine. The bill was introduced as an amendment to the National Defense Authorization Act FY 2022.

“I joined the Navy at 18 years old. I served as a rifleman,” Scott said during the press conference.

“I never imagined that our federal government that I took the oath to defend the freedoms of this country, will come back and say, ‘if you don’t put something in your body that you don’t feel comfortable with, right or wrong,’—and I took the vaccine, I’ve had COVID—that we’re going kick you out of the military, … and we’re going to give you a dishonorable discharge.”

Scott said with the dishonorable discharge, the Biden administration is trying to ruin the lives of those who choose not to get vaccinated.

A dishonorable discharge would mean that the individual would have to surrender a slew of rights and benefits, including ownership of any firearms and ammunition, access to the G.I. Bill for further education, Veterans Affairs home loans and medical benefits, military funeral honors, and reenlistment in another military branch.

“This is disgusting. It’s wrong. It needs to stop,” Scott continued.

Wicker, a member of the Senate Armed Services Committee, said Biden has misjudged how Americans view the issue.

“Our commander in chief is grossly miscalculating the will of the American people,” Wicker said. “Not only is he going to create a crisis in the United States military, but writ large these mandates across our economy—mandates to small businesses, mandates to businesses that would contract with the federal government—they are not going to be well received,” Wicker said.

“Scripture tells us there’s no greater love has a man than this, that he lay down his life for a friend,” Cramer said at the press conference.

“These are the kinds of people who make these decisions to sign up to serve. They have a servant’s heart. And then to disrespect that servant’s heart with this kind of a rule just violates all kinds of common sense and ethics and great traditions of our great country.”

“I would use the term bullying, you know, the military has its ways,” said Marshal, who spent seven years in the Army Reserve. “So I get it. They’re able to bully people if they want you to do something,” he said adding that they’re able to apply peer pressure. “And you know, it works.”

Marshall explained why he wanted to get support for his bill, a legislature trying to prohibit dishonorable discharge for unvaccinated service members.

“What really lit my fire was when I heard the White House say, we want them [to] have a dishonorable discharge,” Marshall said. “So next week is Veterans Day. We’re honoring them this week [as] the president of the United States is dishonoring our military members.”

Marshall has been fully vaccinated against COVID-19.

The White House stated that it “strongly opposes” the senators’ bill, saying that it would “detract from readiness and limit a commander’s options for enforcing good order and discipline when a service member fails to obey a lawful order to receive a vaccination.”

“Taking a vaccine is a requirement. I’ll just leave it at that,” Austin replied at the time.

“President Biden is waging a cruel campaign to punish unvaccinated Americans—depriving them of their ability to provide for their families. This is nothing short of immoral,” the letter reads.

Schumer hasn’t provided a floor time for the National Defense Authorization Act. The delay has brought bipartisan anger against him.

Mark Tapscott and Mimi Nguyen Ly contributed to this report.