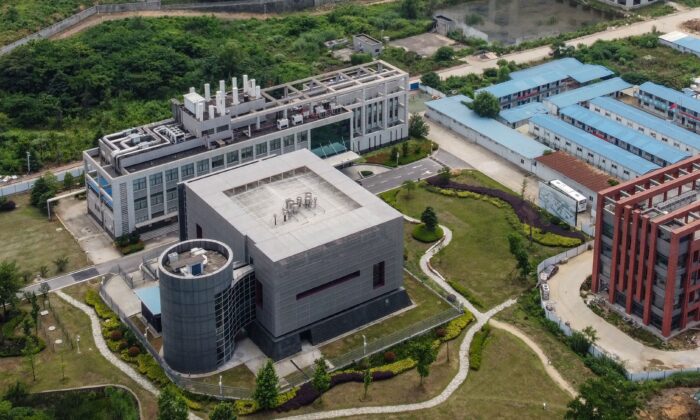 The P4 laboratory (L) on the campus of the Wuhan Institute of Virology in Wuhan, Hubei Province, China, on May 27, 2020. (Hector Retamal/AFP via Getty Images)
Pandemic Ties to CCP

A group of Republican senators on Thursday again demanded that the National Institutes of Health (NIH) provide answers to reports that vital COVID-19 data was deleted from a key government database at the request of a Chinese Communist Party (CCP) official.

In a follow-up letter (pdf) to NIH Director Francis Collins, Republican Sens. Chuck Grassley of Iowa, Marsha Blackburn of Tennessee, and Roger Marshall of Kansas, called on the federal medical research agency to answer questions that they say may shed light on data relating to the origins of the COVID-19 pandemic and NIH’s COVID-19 data retention policies.

The lawmakers in their initial letter in June cited a Wall Street Journal (WSJ) article that reported that Chinese researchers “directed” the NIH “to delete gene sequences of early COVID-19 cases from a key scientific database,” called the NIH Sequence Read Archive.

The WSJ article reported that the deleted data includes COVID-19 genomic sequences from viral samples collected in Wuhan in January and February 2020 from hospital patients. The first cases of COVID-19, the disease caused by the CCP (Chinese Communist Party) virus, were reported in Wuhan, China, in late 2019.

At the time, the senators asked Collins to provide a list of explanations focused on the CCP deletion requests, identifying who at NIH has authority to delete such data, the characteristics of the Wuhan samples, and numerous related issues.

On Sept. 8, Collins said, in a reply to the senators, that a review was underway to determine “whether appropriate steps were taken to assess this withdrawal request.”

“[O]n June 28, 2021, we wrote to you requesting answers to seven questions pertaining to the NIH’s role and responsibility with respect to the Sequence Read Archive (SRA) relating to COVID-19 data,” the Republican senators wrote in their letter on Thursday.

The NIH’s Sept. 8 response “failed to fully and completely answer all seven questions and failed to provide the requested records,” they wrote.

They said that they are reposing the unanswered questions from their June letter, adding that if the NIH is unable to respond to each question and provide the requested records, the agency must explain why that is the case.

The Republican senators are also requesting the results of an independent probe conducted within the NIH over the issue, and that the agency reveal how many researchers and other personnel linked to the CCP have requested that data be deleted from the NIH Sequence Read Archive in the past five years.

“With more than 650,000 American lives lost and trillions of taxpayer dollars spent to support the American people, businesses, and the economy during the COVID-19 pandemic, the public deserves to know what their government knows about the origins of this global illness and the research data that it possesses,” a statement from Grassley’s office said.