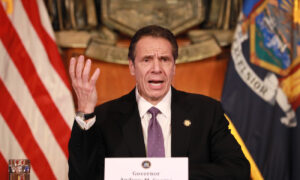 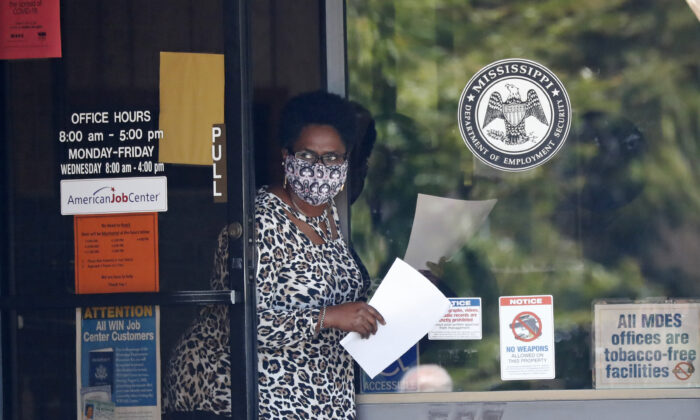 A masked worker at this state WIN job center holds an unemployment benefit application form as she waits for a client in Pearl, Miss., on April 21, 2020. (Rogelio V. Solis/AP Photo)
CCP Virus

Four Republican senators have written to President Donald Trump, pressing that he suspend issuing guest work visas to compensate for the jobs lost due to the CCP virus pandemic.

Sens. Ted Cruz (R-Texas), Tom Cotton (R-Ark.), Chuck Grassley (R-Iowa), and Josh Hawley (R-Mo.) sent a letter to Trump on May 7 urging him to extend and expand his April 22 proclamation on immigration that suspended entry of those immigrants who posed a risk to the U.S. labor market already struggling due to the pandemic.

“These suspensions are critical to protecting American workers as our economy gets back on its feet,” they said.

While many states are gradually reopening their businesses and public places in a phased manner, the job deluge continues. The senators said 33 million Americans have filed for unemployment since mid-march and one-fifth of the entire workforce in the country is out of work due to the CCP virus pandemic.

“While economic shutdowns in states and localities across the country have been necessary to reduce the spread of this pandemic, the results have been devastating for businesses and workers alike,” said the Senators.

They said since unemployment is already a record high, the country shouldn’t admit the one million nonimmigrant workers it allows visas every year.

“Given the extreme lack of available jobs for American job-seekers as portions of our economy begin to reopen, it defies common sense to admit additional foreign guest workers to compete for such limited employment,” said the four Republican senators.

They said the proclamation on immigration did not cover the guest worker programs and it remains a threat to the U.S. job market that’s trying to recover from the crisis.

The senators urged Trump to suspend all nonimmigrant guest worker visas for the next 60 days.

“Unfortunately, it will likely take some time for most businesses to begin generating enough revenue to return to pre-pandemic levels,” said the Senators.

A number of House Republicans have written a similar letter to Trump. A letter written by Reps. Lance Gooden (R-Texas), Paul Gosar (R-Ariz.) and Matt Gaetz (R-Fla.) and a few others have also urged Trump to suspend guest work visa until the situation returns to normal.

Today, I sent a letter to President Trump urging him to extend his Apr-22 EO by suspending ALL guest worker programs with support from multiple House Republicans, including: @RepMattGaetz @RepGosar @RepBrianBabin @michaelcburgess @LouieGohmertTX1 @RepMoBrooks & @SteveKingIA pic.twitter.com/IRmKjjCXWt

“A number of these programs are particularly egregious. As service industry businesses remain shuttered due to social distancing restrictions, hundreds of thousands of bartenders, cooks, and managers have been jobless for months,” said the representatives, adding that the immigrant workers who are allowed to enter the country at this time will compete with the already stressed American workers.