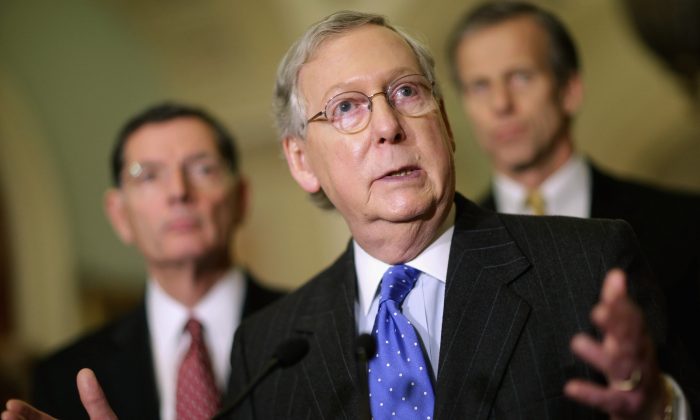 GOP Senate majority leader Mitch McConnell has signaled that he will fight the appointment of any Supreme Court Justices during the remainder of Obama’s presidency.

“The American people should have a voice in the selection of their next Supreme Court Justice,” McConnell said in a statement. “Therefore, this vacancy should not be filed until we have a new president.”

The statement was released shortly after news broke that the conservative stalwart on the bench, Antonin Scalia, had passed away on a West Texas ranch.

“Today our country lost an unwavering champion of a timeless document that unites each of us as Americans,” McConnell said. “Through the sheer force of his intellect and his legendary wit, this giant of American jurisprudence almost single-handedly revived an approach to constitutional interpretation that prioritized the text and original meaning‎ of the Constitution.”

The concern among conservatives is that  Obama will use the opportunity to appoint a liberal judge to the court and tip the balance of power in favor of the left wing of the bench, and some have called for McConnell to make an explicit promise that such a scenario would not transpire.

I don’t want to hear McConnell say “should not.” He must say “will not.”

Don’t let McConnell hedge language. This is too important. He must say “the Senate WILL NOT fill the vacancy this year.” Not “should not.”

The reaction from left wing reporters to McConnell’s statement was disappointment.

McConnell’s precipitate statement is wrong not only on grounds of appropriateness & timing, but even politics …