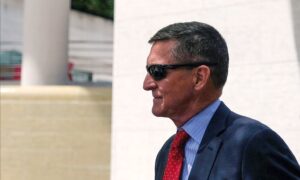 GOP Says Biden Should Release Transcripts of Calls With Leaders of Ukraine, China

Republicans are calling for the release of transcripts of communications former Vice President Joe Biden had with leaders of Ukraine and China amid a media furor over a call President Donald Trump had with Ukraine’s leader in July.

Biden said last year that he pressured then-Ukrainian President Petro Poroshenko into firing a prosecutor in 2014 that was at the time investigating an energy company of which Biden’s son, Hunter Biden, sat on the board. Hunter Biden worked for the company until this year.

Biden recently denied talking to his son about his business dealings despite his son saying earlier this year that he had spoken to his father about about the company.

Hunter Biden has also worked for firms in China including when his father was still in office.

Hitting out after Biden said he supports an impeachment inquiry against Trump, GOP Chairwoman Ronna McDaniel called for the release of transcripts of calls between Biden and leaders in Ukraine and China.

“Once again, Joe Biden has shown he is just as extreme as the rest of the 2020 Democrats who are desperate to bring President Trump down. Instead of backing a baseless impeachment effort, Biden should be answering for the only scandal that exists: Why a corrupt Ukrainian company paid his son $50,000 a month to lobby the Obama-Biden administration, and why Biden threatened the Ukrainians if they failed to fire a prosecutor investigating the company,” McDaniel said in a statement.

First it was the Russia hoax.

These are the transcripts we actually need to see: Biden’s calls with foreign leaders while his son was conducting shady business deals in those countries.

“Now that the President has authorized the release of the transcript of his call with President Zelensky, we call on Biden to release the transcripts of his calls as Vice President with Ukrainian and Chinese leaders while his son was conducting shady business deals in those countries.”

Trump on Tuesday said he’d release an unredacted transcript of the call between him and Ukranian President Volodymyr Zelensky.

“You will see it was a very friendly and totally appropriate call. No pressure and, unlike Joe Biden and his son, NO quid pro quo! This is nothing more than a continuation of the Greatest and most Destructive Witch Hunt of all time!” he said in a statement.

According to The Washington Post, an anonymous whistleblower in the intelligence community filed a complaint with Michael Atkinson, the Inspector General of the Intelligence Community (ICIG), over the call, claiming Trump improperly pressured Zelensky to probe Biden. He said it was a matter of “urgent concern.”

Acting Director of National Intelligence Joseph Maguire’s office said that the complaint “does not fall within the statutory definition of an ‘urgent concern’ set forth in U.S. code.”

General counsel with the office told lawyers representing the whistleblower that “because your client’s complaint involves confidential and potentially privileged communications by persons outside of the Intelligence Community, we are consulting with other Executive Branch stakeholders before transmitting to you the guidance sought.”

Maguire is slated to appear before the House Intelligence Committee in an open hearing on Thursday.

House Speaker Nancy Pelosi (D-Calif.) on Tuesday evening announced that the House would be “moving forward with an official impeachment inquiry.”

“The president must be held accountable. No one is above the law,” she said. “The actions taken to date by the president have seriously violated the Constitution, especially when the president says, ‘Article Two says I can do whatever I want.'”