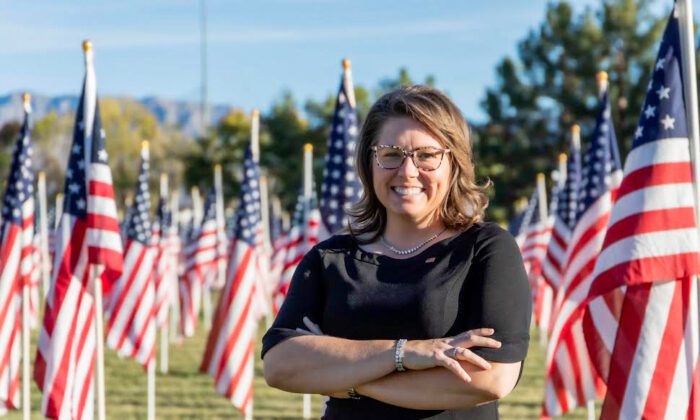 Nevada State Assembly Member Ann Black (R-Mesquite) says she doesn’t need polls to confirm that her campaign is gaining steam and will roll to a win on June 14 in the Republican primary in the state’s Congressional District 4. To advance to November’s general election against two-term incumbent US. Rep. Steven Horsford (D-North Las Vegas), Black will need to get past Las Vegas businessman Sam Peters, who's equally convinced that he’s winning next week’s Republican primary. (Photo provided)
2022 Midterm Elections

There’s little reliable polling at the congressional district level in Nevada, so as the state’s June 14 primaries near, many candidates in three crowded Republican preliminary races think they still have a good shot at advancing to challenge incumbent Democrats in November.

The two frontrunners in Nevada’s Congressional District 4 Republican primary—at least in terms of media exposure and campaign fundraising—are no exception.

“I feel good. The closer we get, the better I feel about it,” said Nevada State Assembly Member Ann Black, of Mesquite. “I think we are going to win.”

“I think we are in good shape, I really do,” said Sam Peters, a retired U.S. Air Force major and Las Vegas insurance firm owner. “Everything we are seeing tells us we are where we should be. On election day, we’ll find out.”

Both are certain that they’ll be nominated to take on two-term U.S. Rep. Steven Horsford (D-Nev.) in the sprawling seven-county district that the Democratic-controlled state legislature tweaked to bolster the incumbent’s reelection odds.

Black and Peters have emerged as the two most seen and heard of the three candidates entered in the Congressional District 4 Republican primary. The third hopeful, Las Vegas Councilwoman Michele Fiore’s chief of staff Chance Bonaventura, has been less visible, less loud, and wrote in a June 8 email that his campaign’s “sole focus is getting out the vote this last week (phone calls, door knocking, etc.).”

Peters said his campaign has “done some polling” that shows he was up by “double digits” in April. Since then, he’s relied on “nonscientific polling” to “give us a feel” about how prospective voters are leaning.

“Everything we’re seeing, through our grassroots [outreach], phone calls, has us up,” he said.

After winning a seat on the Mesquite City Council in 2018 and in the Nevada Assembly in 2020 as an underdog—and gaining statewide recognition for being censured after refusing to wear a face mask during legislative sessions—Black said she doesn’t need polls to confirm that her campaign is gaining steam and will roll to a primary win.

“Polls are so expensive,” she said. “To me, is the juice worth the squeeze?”

There’s been plenty of juice worth the squeeze on the campaign trail, however, with voters alarmed about the economy, dissatisfied with the Biden administration, and unhappy with Nevada’s four-member congressional delegation, especially its three Democrats.

Black and Peters are staunch conservatives and share similar fervency for former President Donald Trump’s “America First” agenda. Black attended the Stop the Steal rally in Washington on Jan. 6, 2021, and is on the National Republican Congressional Committee’s (NRCC) list of “Young Guns” anointed to reclaim the House.

It hasn’t been difficult to pinpoint the issue that’s most distressing voters, Black said.

“It’s the economy, stupid. That’s what it is,” she said, citing an Axios article that noted there were more Google keyword searches for “inflation” in Nevada’s Congressional District 4 than any other congressional district in the nation.

“People are being hurt by inflation when they buy gas, buy groceries,” Black said, and that pain is what she’ll focus on in the days before the primary.

“The economy is probably up there, that’s the one that hits the pocketbooks most directly,” he said, noting Nevadans, like many Americans, are tired of seeing repeated “shortages of essentials” as legacies of the COVID-19 pandemic and a mismanaged economy.

“The shortage of baby formula—I have friends with little ones, it’s a real problem, a significant problem. I put myself into the shoes of not being able to feed my daughter.”

Peters claimed that the shortage is an example of “what Democrat policies are doing to the country.”

Peters said voters are keying on two issues that reflect national concerns and one that focuses on the traditional western federal–state tussle over public lands management, especially in Nevada, where more than 80 percent of the state is under federal agency control.

“Illegal immigration, people are incredibly frustrated about what is happening at the border,” he said. “The current administration is not only allowing it, but seemingly condoning it.”

Voters are angry about “debt spending,” Peters said, and “the amount of U.S. dollars being spent around the world for incredible things while American citizens are being ignored.”

It’s criminal,” he said. “People are aware that this is not something that we can sustain on the path we are on.”

And then there’s “government overreach,” something Nevadans know well since the landscape and horizons around them are defined by the reach of a government located nearly 2,500 miles away.

“Eighty-seven percent of my district is owned by the federal government,” Peters said. “There are counties that are 97, 98 percent owned by federal agencies, such as Lincoln County, which has to operate on a tax base where only 2 to 3 percent of the county” is taxable.

In speaking with city planners, one of the biggest roadblocks to development they cite is dealing with the bureaucracy and disinterest of the U.S. Bureau of Land Management (BLM), he said.

“The people of Nevada do understand government overreach. It affects us in a big way, certainly,” Peters said.

But the pandemic exposed just how far federal overreach can actually reach, according to Peters.

According to Peters, Nevadans wouldn’t elect, and certainly wouldn’t reelect, representatives who collaborate with rather than resist expansions of federal authority.

“The Governor Office’” under Gov. Steve Sisolak, a Democrat who’s seeking a second term in November, “has set the tone and bought into the overreach, the mandates, hook, line, and sinker. Nevada is still a bit of the ‘Wild West.’ It’s not how people here live,” he said.

Black also said government overreach is the biggest problem with government, which can be scaled back if voters install Republicans in Congress this fall.

“I am a business owner. I understand small businesses, and those people have been hurting during the two years that our governor has had us under” restrictions, she said. “We need to pull regulations off our businesses.”

Black said that as a native Nevadan—“battle born”—she has always been proud of the state’s capacity to attract people seeking opportunity.

“I am from here. My history, and my future, being here, I know this state has represented that anybody could come here and be successful. To me, it is really important to get back to that—not a lot of regulation, low taxes, a free state,” she said.

With similar ideologies, agendas, and campaign messaging, Black said there’s one glaring difference between her and Peters.

“Honestly, I feel like when you are running a political campaign, it is your job to distinguish yourself” from other candidates, she said. “He lacks experience; he has never won an election. That is not bashing him; that’s just the facts.”

Black maintains that Peters has been playing low ball, calling him “slime time” in a recent campaign “AnnieGram” for disparaging her record as a city councilor and state assembly member.

“Unfortunately, he has been making things up, misrepresenting my record,” she said. “Besides that fact, people know what they are getting when I am elected to office, and that is important.”

Black has “been feisty,” Peters said, but noted that he has plenty of experience as a military veteran and a business owner and that Black didn’t enter the race until January, after claiming that she wouldn’t do so.

“She came in a little late and made us spend more money than we wanted to, more than we should have,” he said. “She actually met with me a couple of times last year. We were friendly, went to lunch several times. I asked her on two occasions directly if she was going to run. She said she would not.”

“She started making personal attacks, and we hit back—we hit back on her record, not on a personal level,” he said.

Both dismiss analyses that say geography will play a role in the race between a Las Vegas Valley candidate and an opponent from the deserts of the northeast.

“In CD 4, we have the inner-city people who are struggling and the rural people who are suffering,” Black said. “There may be a different dynamic, but they are all being hit very hard by exploding rent prices, exploding gas prices, inflation. That is priority No. 1” for voters across the district.

But with ambient anger over inflation and dissatisfaction with the Biden administration mounting, those moves may end up backfiring on Democrats in November. Cook Political Report rates what had been “likely” Democratic wins now as “toss-ups” in all three congressional districts.

Horsford, Nevada’s first-ever elected black congressional representative, has done a good job of endangering his own reelection. When he announced that he was running, he was upbraided by his wife for wanting to return to Washington, where he has admitted to a longtime affair with a former intern of the late U.S. Sen. Harry Reid (D-Nev.).

As a result, despite Democrats holding a 10.5 percent advantage in registered Congressional District 4 voters—and Horsford holding more than $2 million in his campaign coffers without a primary challenger—Cook Political Report rates his prospects for a third term as a “toss-up” against the winner of the Republican primary.

Black is sure that winner will be her. Over the next few days, “I’ll be on the phones” and meeting informally with voters, she said.

“The biggest thing I’ve learned is to spend less time at party functions and more time speaking with voters. I’m not sure (party officials’) thoughts and feelings are indicative of the greater Republican voter base,” she said. “Not everyone eats and sleeps politics the way we whackos do.”

Black has no election day plans.

Peters is sure that he’ll be the winner. He’ll also be working phones and doing meet-and-greets. On election day, he’ll be “out at polling places all day long” with a gathering planned for that night.

Both can’t win, but both agree change is in the air, that Republican voters are far more enthusiastic than their Democratic counterparts, and that a November across-the-board Republican sweep is very realistic.