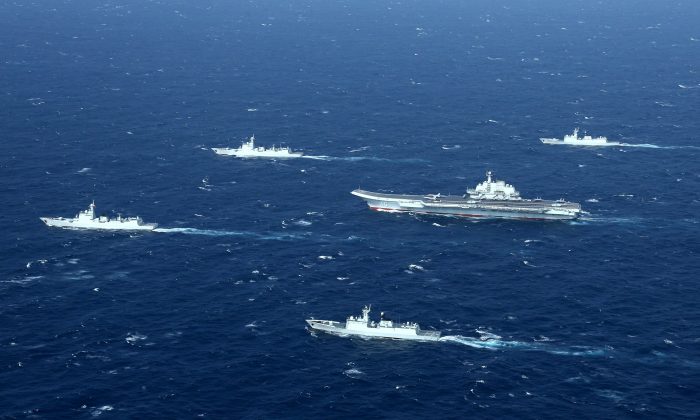 A Chinese navy formation during military drills in the South China Sea on Jan. 2, 2017. (STR/AFP/Getty Images)
By Tom Ozimek

Five Republican lawmakers have introduced a resolution in the United States Senate to condemn moves by China’s communist regime to militarize the South China Sea as part of a contested and roundly criticized territorial grab.

The South China Sea is a key trade corridor, carrying an estimated one-third of global shipping, according to a report (pdf) from the United Nations Conference on Trade and Development. China has claimed the vast majority of waterway as its own, seeking to solidify its claim by building up artificial islands with military installations, including airfields and missile batteries.

“The Communist Party of China, led by General Secretary Xi, continues to militarize the South China Sea and is eager to expand its territorial claims in the region. This aggressive and unlawful action cannot be tolerated,” Sen. Rick Scott (R-Fla.) said in a statement on Wednesday.

Besides rebuking China’s communist leaders for ordering a military encroachment on the trade route, the resolution hails the United States Navy and Coast Guard for operations they conduct in the South China Sea to ensure freedom of navigation. The United States and its allies routinely conduct such operations, essentially to ensure the waterway remains open for business.

Arkansas State Sen. Dan Sullivan, a Republican, said in a statement that the resolution “commends the courageous Coast Guard and Navy service members who continue to promote international order in the region and sends a strong message to the Chinese Communist Party that hostility toward our allies will not be tolerated.”

In a recent move on the freedom of navigation front, German government officials said last week that a German frigate would set sail for Asia in August and, on its return journey, become the first German warship to cross the South China Sea since 2002.

The United States hailed plans by its NATO ally to sail the warship across the contested waterway, calling the move welcome support for a “rules-based international order” in the region, something Washington says is threatened by China.

A spokesman for China’s foreign ministry said countries enjoyed freedom of navigation and overflight in the waterway under international law, but added, “they cannot take it as an excuse to undermine the sovereignty and security of littoral countries.”

Yet undermining sovereignty—but by Chinese authorities—was precisely the implication of a landmark 2016 ruling by an international tribunal in The Hague, which reprimanded Beijing for its behavior in the South China Sea, including its construction of fake islands. The tribunal found no legal basis for China’s expansive territorial claim, rejecting Beijing’s argument of historic rights over most of the South China Sea. The ruling also blasted the Chinese regime for violating international law by causing “irreparable harm” to the marine environment with its massive dredging operations that excavate the sea bed to build up artificial island fortresses.

Washington, too, has rejected Beijing’s disputed claims to offshore resources in most of the South China Sea as “completely unlawful.”

Besides the U.S. Navy regularly carrying out freedom of navigation operations in which its warships pass close by to some of those islands, the United States has also been keen for allies to follow suit.