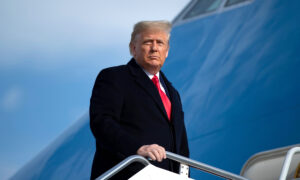 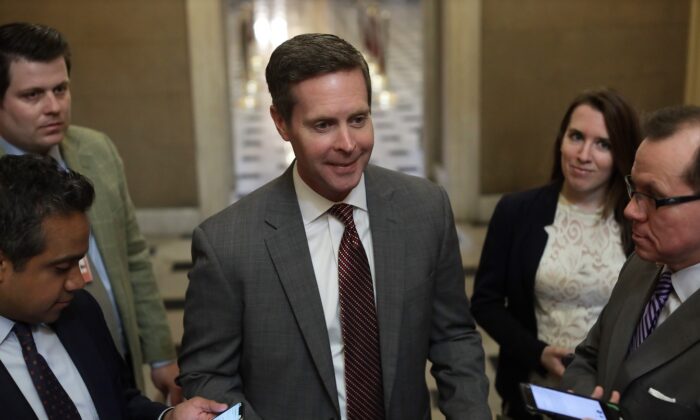 U.S. Rep. Rodney Davis (R-Ill) speaks to members of the media at the U.S. Capitol in Washington on March 13, 2020. (Alex Wong/Getty Images)
Politics

Speaker of the House Nancy Pelosi (D-Calif.) is showing a “dereliction in duty” by failing to make public a plan for congressional aides and Capitol complex employees to get the CCP virus vaccination, according to Rep. Rodney Davis (R-Ill.).

“There has got to be a plan in place, and she failed miserably in the planning for the House testing earlier this year, so she needs to show a little more foresight in the vaccination process and plan ahead,” Davis told The Epoch Times on Dec. 15.

Davis is the ranking Republican on the House Committee on Administration.

A spokesman for Pelosi didn’t immediately respond to a request to The Epoch Times for comment.

“Congress can’t remain closed in perpetuity,” Davis said. “Congress has to reopen no matter how much she likes Congress being closed, because it consolidates her power.

“We’re going to have to put ourselves on a path to make sure everyone in this country is vaccinated and also we have to be on a path to reopen Congress to show the American people that it is American ingenuity that allowed us to defeat this disease in record time,” he said.

Davis sent a letter to Pelosi on Dec. 15, in which he encouraged developing a plan based on the existing one used by congressional officials against the flu.

“I have every confidence in our ability to roll out a successful program by the end of January [2021] based off the House’s existing flu vaccination model – a tried and trusted program that many House Members and staff are familiar with and benefited from,” Davis told Pelosi in his letter.

“Additionally, implementing a clear plan will signal to both the private and public sector that the House has confidence in the vaccine,” Davis wrote.

“The Center for Disease Control and Prevention (CDC) has established a nationwide distribution plan and states, communities, and businesses are approving independent vaccination programs in anticipation of when doses become more widely available. It only makes sense that when the time comes, the House has a plan as well.

“As an essential branch of government, it is vital that our institution returns to full functionality and that our Members and essential staff are provided a transparent vaccination plan to not only ensure the continuity of operations, but the health and safety of our committed workforce,” Davis wrote.

The Illinois Republican, who won reelection in November, said there’s no reason to keep the House of Representatives operating on the current closed-to-the-public basis, with proxy voting and virtual attendance and testimony in committee hearings.

Davis added in his letter that he sees “no signs of motivation to return the House to working order. All while set in the backdrop of millions of Americans who have been asked to show up and do their jobs in person in order to maintain our supply chains, health care systems, economy, election integrity, and law and order.”

Rep. Zoe Lofgren (D-Calif.) is chairman of the administration committee, which would oversee a vaccination program for House aides and employees in conjunction with the House attending physician. Committee spokesman Peter Whippy didn’t immediately respond to a request by The Epoch Times for comment.

“Nine months have passed since the coronavirus first shut down the Capitol, and nearly a year since it first hit our shores. At every stage of its spread, the House has underperformed in its adaptability and resiliency,” Davis told Pelosi.

“To this day, the House remains closed to the American people and is failing to fully perform its duties, even as universities, public institutions, private businesses, and communities across the country have embraced technologies and processes to mitigate the spread of COVID-19.

“Available testing for the House community was only recently made available, months beyond a reasonable timeline for implementation, and only after the Washington, D.C. Mayor’s requirement that all individuals traveling to the city must obtain a test.”

Davis has been the most vocal House Republican in criticizing Pelosi’s response to the CCP virus.

In October, he told Pelosi in a letter that, while he appreciated “that the attending physician has been able to conduct COVID-19 testing for Members who have symptoms or have been exposed, provide very limited staff testing, and advise offices on contact tracing, our ability to monitor the health and safety of the House is severely lacking because you have failed to implement a plan.

“Universities, public institutions, private businesses, and communities across the country have embraced technologies to mitigate the spread of COVID-19. Yet, the House has failed to adopt similar tools that are now being used nationwide,” he wrote.