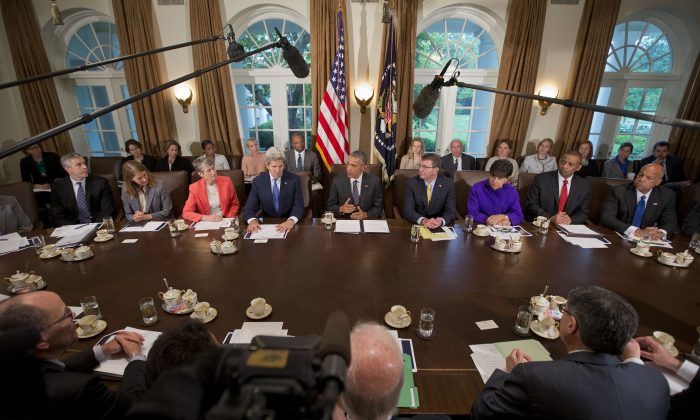 President Barack Obama speaks to the media while meeting with members of the cabinet in the Cabinet Room of the White House in Washington, Thursday, May 21, 2015. (AP/Pablo Martinez Monsivais)
Politics

WASHINGTON—Health and Human Services Secretary Sylvia Burwell is ready to defend President Barack Obama’s health care law before congressional Republicans who consider it a failure and who hope the Supreme Court will void one of its cornerstones — federal subsidies that help millions afford coverage.

Burwell was scheduled to testify Wednesday before the GOP-led House Ways and Means Committee as Obama’s five-year-old health overhaul remains a partisan flashpoint likely to reverberate through next year’s presidential and congressional elections.

According to excerpts of her opening remarks, Burwell lauded the health care law for “our historic progress in reducing the number of uninsured and improving coverage for families who already had insurance.”

Burwell’s appearance comes with a Supreme Court decision expected this month on whether subsidies that millions of Americans are receiving under the law are legal. It also comes as health insurers in many states have proposed double-digit rate increases for next year — which Republicans cite as evidence of the law’s failures.

“It’s a pocketbook issue for families, for small businesses,” said Rep. Erik Paulsen, R-Minn., a Ways and Means member. “There are better answers.”

In a speech Tuesday, Obama mocked “unending Chicken Little warnings” from opponents who warned that the law would abridge people’s freedom.

“There’s something, I have to say, just deeply cynical about the ceaseless, endless partisan attempts to roll back progress,” Obama said at the Catholic Hospital Association conference.

In his prepared remarks, Rep. Sander Levin of Michigan, top Democrat on Ways and Means, said, “The predictions of doom and gloom from the other side have certainly not come to pass. No rationing, no destroying Medicare, no bankruptcy.”

Conservatives who brought the Supreme Court case contend that the health overhaul allowed subsidies only for people in states that created their own insurance marketplaces, not those using the federal HealthCare.gov website. More than 30 states use the federal website and millions of their residents could lose subsidies — which they receive as tax credits — and be forced to drop health coverage they’d find too expensive.

A victory by the conservatives could put disproportionate political pressure on Republicans to help those who’ve lost subsidies. Of the 34 states likeliest to be most affected by such a ruling, 26 have GOP governors. And 22 of the 24 GOP senators up for re-election next year are from those same states.

Top House and Senate Republicans have been working privately toward legislation restoring aid to those losing it until sometime in 2017. It would also eliminate parts of the health overhaul, such as its requirement that companies insure workers. That would almost certainly draw a veto from Obama.

Republican lawmakers say they will unveil their plan once the justices rule, though there are no indications they have united behind a particular plan. They hope a Republican will inhabit the White House in 2017 so they can repeal the current law and enact one less expansive.

According to the most recent figures from Burwell’s agency, 10.2 million people nationally have obtained insurance coverage under the health law from state and federal marketplaces and started paying for it.

Of those, 7.3 million are from the 34 states most likely to lose subsidies if the plaintiffs win at the Supreme Court. About 88 percent of them — 6.4 million — receive federal subsidies averaging $272 monthly.

As insurers begin filing their premium requests for next year with state agencies, some seeking large increases are blaming unexpectedly high costs from covering more patients under the health care law and rising prescription drug prices.

Regulators can block the requested increases in some states while officials can pressure insurers to curb their increases in others.