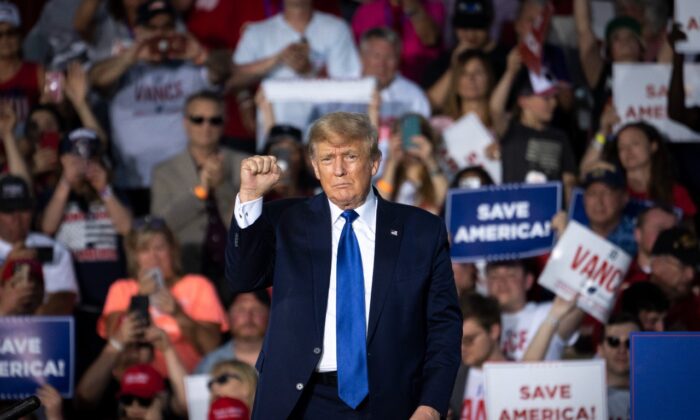 Former U.S. President Donald Trump gestures after speaking during a rally hosted by the former president at the Delaware County Fairgrounds on April 23, 2022 in Delaware, Ohio. The week earlier, Trump announced his endorsement of J.D. Vance in the Ohio Republican Senate primary. (Photo by Drew Angerer/Getty Images)
2022 Midterm Elections

As the buzz heats up around a number of primary electoral contests set to take place in May, some people have come to view the elections as unofficial referenda on the continuing influence that Donald Trump wields over the Republican Party and the willingness of GOP voters to affirm a party identity distinct from that forged during Trump’s time in the White House.

The outcome of these races is full of significance for the November midterm elections as well as for November 2024, when many believe Trump plans to make another bid for the White House.

In the view of Keith Naughton, the principal of Maryland-based consulting firm Silent Majority Strategies, the former president does indeed have a great deal on the line in the coming primaries, and their outcomes may well signal a shift toward a different brand of Republicanism.

One of the more closely watched contests is the gubernatorial primary set to take place in Georgia on May 24, which pits the state’s Republican governor, Brian Kemp, against Trump-backed challenger David Perdue, who served as one of Georgia’s senators from 2015 to 2021. Whoever wins the GOP nomination will square off against presumptive Democratic nominee Stacey Abrams, a former state senator and minority leader of the state’s House of Representatives from 2011 to 2017.

Despite Trump’s endorsement, a RealClearPolitics poll gives Kemp a marked lead, with 47.7 percent support compared to 33.9 percent for Perdue. No other candidate in the poll has double-digit support.

“The Georgia race is an interesting test, as it is a one-on-one race. If Trump fails to dislodge Kemp, it is very bad for Trump,” Naughton said.

“If Trump can push Perdue to the nomination, that’s a big win for him. But if Perdue then loses to Abrams, it is a big problem.”

Naughton is of the view that Trump’s influence within the GOP is on the wane and that Trump’s support for Perdue may have limited impact on the outcome of the race.

“Note that in the recent Trump endorsements in Pennsylvania and Ohio, the Trump candidate has edged into the lead, but neither has moved over 30 percent. Trump’s endorsements are looking more and more like a niche phenomenon, moving less than 10 percent of Republican voters—enough to change a multi-way primary field, but not moving the majority of GOP voters,” he said.

Naughton said he sees this diminished influence as a sign that GOP voters are increasingly making assessments of candidates based on their merits and not looking to Trump to decide whom to back. As of this writing, the latest polling data affirm Naughton’s view. A poll conducted by the University of Georgia’s School of Public and International Affairs found that Kemp holds a more than 20-point lead over Perdue, and hence Kemp is likely, in the absence of a major upset, to cruise to the nomination without a runoff.

One race for which the outcome may be hard to predict at this point is Ohio’s GOP Senate primary, set to take place on May 3. Here, too, Trump’s influence appears to be sharply limited.

Venture capitalist J.D. Vance has gotten Trump’s endorsement in his effort to succeed retiring Sen. Robert Portman. But polls conducted between April 13 and April 24 suggest that the endorsement has failed to make Vance the frontrunner. Currently, Vance enjoys 23 percent support, the same as former state Treasurer Josh Mandel. The two are slightly ahead of entrepreneur Mike Gibbons, whose support stands at 13 percent, and state Sen. Matt Dolan, with 11.5 percent.

One of the strongest signs that GOP voters increasingly don’t fall into lockstep with Trump’s wishes comes across in the race in Pennsylvania to replace retiring Sen. Pat Toomey. The primary is set to take place on May 17. Dr. Mehmet Oz, a celebrity physician, has received Trump’s endorsement, but so far, this appears to have given Oz little advantage over rivals including former hedge fund CEO David McCormick, who recent polls suggest enjoys 22.2 percent support, compared to only 18.8 percent for Oz.

Both candidates have a considerable lead over political consultant and commentator Kathy Barnette, whose support stands at 10.8 percent. Oz has been the subject of aggressive criticism from McCormick questioning whether Oz is really a conservative, particularly on social issues. However, polls aren’t unanimous, and one administered by the Trafalgar Group found Oz with a very modest 3-point lead.

Elsewhere, Trump’s influence appears even more limited. Another southern state, Alabama, will hold a Senate primary on May 24 pitting Katie Britt, a former aide to retiring Republican lawmaker Richard Shelby, and Mike Durant, a former Black Hawk helicopter pilot who made headlines for his role in the 1993 Battle of Mogadishu and subsequent imprisonment in Somalia.

Since Trump’s withdrawal of his endorsement of Rep. Mo Brooks, no one in the primary contest enjoys the former president’s support. A poll conducted by The Hill has found Durant with 33 percent support, Britt with 23 percent, and Brooks with a mere 12 percent.

In North Carolina, which is set to hold its GOP Senate primary on May 17, Trump’s support for Rep. Ted Budd appears to have finally kicked in and made a significant difference in the latter’s prospects against former governor Pat McCrory. Average poll results culled from April 1 to April 10 have Budd with 34.3 percent support, compared to 22 percent for McCrory and only 7.7 percent for former Rep. Mark Walker, whom Trump unsuccessfully encouraged not to pursue a Senate seat this year. Trump reportedly promised to back Walker in the race for a House seat in return for Walker’s staying out of the Senate race and avoiding complicating things for Budd.

Another state where Trump appears to command a bit more sway is Texas, whose race for attorney general is underway. Trump’s candidate, Attorney General Ken Paxton, and Land Commissioner George P. Bush both did well in the March 1 primary without clearing the 50 percent bar needed to secure the nomination. Hence, the two are headed for a May 24 runoff.

Recent polling by the Texas Politics Project at the University of Texas at Austin found Paxton with a wide lead, enjoying 47 percent support, more than twice the 21 percent for Bush.

Besides Trump, Paxton has the support of influential political figures within the state. Former aides of Paxton have accused him of retaliating against them by firing them after they accused him of bribery and other misdeeds. But on April 25, Gov. Greg Abbott and Lt. Gov. Dan Patrick filed amicus curiae briefs urging the state Supreme Court to throw out the whistleblower lawsuit that Paxton’s opponent Bush has used to try to discredit the attorney general.

Another fierce contest plays out in Missouri, where the pending retirement of Sen. Roy Blunt opens the field to a wide range of GOP candidates in the primary elections coming up on Aug. 2. Foremost among them are former Gov. Eric Greitens, current Attorney General Eric Schmitt, and Rep. Vicki Hartzler. Greitens resigned from office in 2018 amid allegations of campaign finance violations and sexual misconduct, leading some to question his suitability as a current candidate.

In a crowded field, recent polls have Schmitt with 23 percent support, and Greitens and Hartzler virtually neck and neck with 22.5 percent and 22 percent, respectively. The fact that Trump hasn’t yet weighed on in this race poses a stark question for some observers. If and when he does so, some may view the outcome as a measure of Trump’s continuing ability to tip the balance of a hotly contested race.