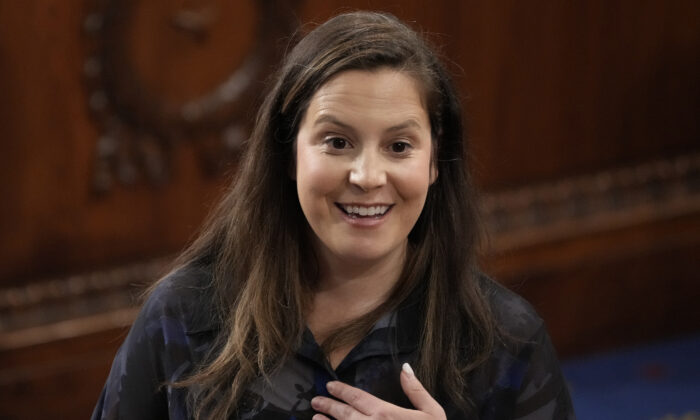 Rep. Elise Stefanik (R-N.Y.) awaits the arrival of Greek Prime Minister Kyriakos Mitsotakis in the House Chamber of the U.S. Capitol in Washington on May 17, 2022. (Drew Angerer/Getty Images)
Republicans

House GOP lawmakers are scheduled to hold a press conference in the morning on June 8, as part of several counter-programming events for the Jan. 6 Committee’s public hearings.

The presser, to be held at 10:45 a.m. on Wednesday, is led by Rep. Elise Stefanik (R-N.Y.), according to Fox News. Other House Republicans scheduled to make an appearance include House Minority Whip Steve Scalise (R-La.), Rep. Jim Banks (R-Ind.), and Rep. Jim Jordan (R-Ohio).

In July last year, House Speaker Nancy Pelosi (D-Calif.) rejected Banks and Jordan from sitting on the panel investigating the breach of the U.S. Capitol on Jan. 6, 2021.

She added, “House Republicans will be all over the airwaves setting the record straight, telling the American people the truth, sharing the facts, and asking the real questions like why Nancy Pelosi is the only person off limits from this investigation?”

The first Jan. 6 hearing will be aired at 8 p.m. on June 9, and the committee has announced another hearing beginning at 10 a.m. on June 13.

Read More
Timeline of Events in DC on Jan. 6
House Republicans Will Be ‘Pushing Back’ Against Jan. 6 Committee: Rep. Stefanik

The committee has promised viewers that it will “present previously unseen material documenting January 6th, receive witness testimony, preview additional hearings, and provide the American people a summary of its findings about the coordinated, multi-step effort to overturn the results of the 2020 presidential election and prevent the transfer of power.”

In May 2021, Republicans ousted Cheney as House Republican Conference chair and replaced her with Stefanik.

Stefanik also criticized the committee in her interview with Fox, calling it “illegitimate, unconstitutional, and designed to punish Pelosi’s political opponents.”

“It will not prevent another January 6th from happening, and it does nothing to address the numerous crises Americans are suffering from because of Joe Biden and Nancy Pelosi’s radical far-left agenda,” she added.

Jordan, in an op-ed published by The Federalist on June 7, slammed the Democratic Party for having an agenda against the GOP with these prime-time hearings.

“There’s a more sinister aim: convincing Americans that conservatives are to blame for the events of that day,” Jordan wrote. “Democrats want to use the violence of Jan. 6 to stigmatize conservative voices and delegitimize conservative ideals.”

He added: “Make no mistake, the violence of Jan. 6 was as wrong as wrong can be. But Americans watching the hearings should have no illusions about the Democrats’ true objectives.”

Jordan is the ranking member of the House Judiciary Committee.

Another member of the House Judiciary Committee, Rep. Steven Cohen (D-Tenn.), told CNN on June 7 that Thursday’s prime-time hearing will be about “how much Trump was involved” in the storming of the U.S. Capitol. He accused Trump of running this “show” with his sons and “all of his henchmen up there.”

The House impeached Trump on Jan. 13, 2021 for allegedly inciting the Capitol attack. The Senate acquitted him in the following month.

Rep. Andy Biggs (R-Ariz.), who is also a member of the House Judiciary Committee, took to Twitter on June 6 to say that the Jan. 6 hearing this week is a “distraction.”

“The illegitimate Jan. 6 hearing this week is a distraction from the Biden Admin’s colossal domestic and international failures,” Biggs wrote. “Americans are troubled by Biden’s record inflation, high gas prices, major crime in cities, and a porous southern border.”

“The priorities are wrong,” Biggs concluded.

According to an ABC News/Ipsos poll published on June 5, only 28 percent of respondents said they approved of Biden’s handling of inflation, with 27 percent approving how the president is dealing with the rising gas prices.