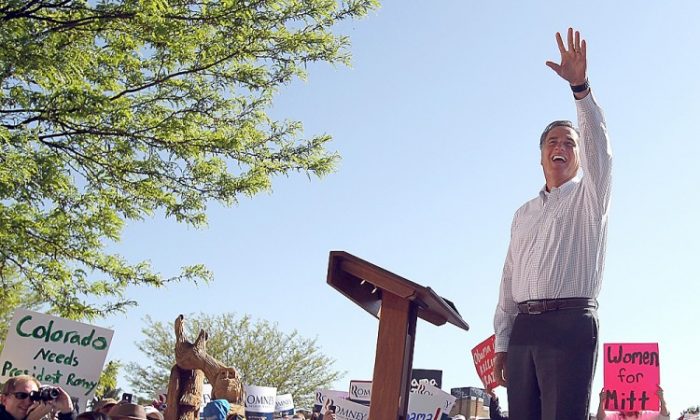 Mitt Romney secured the Republican presidential nomination Tuesday after gaining the required number of delegates. However, it remains to be seen how well he can juggle the concerns of conservative Republicans as he moves into general election mode.

“Following any presidential primary season, the candidates always move toward the political center in the hopes of shoring up moderate and independent votes, and this year will be no different,” said Jennifer Marsico, a specialist in U.S. elections with the American Enterprise Institute.

“However, the tea party faithful will make sure that Romney doesn’t abandon the conservatism he demonstrated in the primary,” she told The Epoch Times.

Romney gained 105 of the 155 delegates up for grabs in the Texas primary, May 29, surpassing the 1,144 delegates needed to win the nomination, according to the AP Delegate Tracker.

The Republican campaign has been a protracted and, at times, an acrimonious contest for the presidential nominee. Romney, as front-runner, has spent much of his time fending off attacks from rivals, including Texas Gov. Rick Perry, former Pennsylvania Sen. Rick Santorum, and former House Speaker Newt Gingrich.

“We finally got there. It’s an honor and a privilege and a great responsibility,” Romney told supporters at a Las Vegas fundraiser on Tuesday night. “I know the road to 1,144 was long and hard, but I also know that the road to 11/06, November 6, is also going to be long, it’s going to be hard and it’s going to be worth it because we’re going to take back the White House and get America right again.”

Romney’s rivals have since endorsed the former Massachusetts governor, except for Texas Rep. Ron Paul, a Libertarian who has suspended campaigning, but not his campaign to gain delegates.

He ran against John McCain in the GOP primaries in 2008 and lost, gaining a reputation as a “flip-flopper” after reversing prior moderate positions on issues including tax cuts, immigration, and gun laws.

In his 2012 primary campaign he has endeavored to avoid social issues, focusing instead on the U.S. economy and his record as a successful businessman as CEO of private investment firm, Bain Capital.

Following the financial crisis and the Wall Street meltdown, however, high finance has not been as alluring as it once was, opening up another flank for his rivals to attack.

Newt Gingrich accused him of being part of a group of “rich people figuring out clever legal ways to loot a company,” while Gov. Perry described private equity firms as “vultures.”

Rick Santorum’s rise to preeminence toward the end of the primary contest brought conservative social issues to the forefront again. He accused Romney of not being a true conservative.

Since Santorum suspended his campaign, and it became clear that Romney would be the nominee, conservatives have either endorsed Romney or toned down the rhetoric. Yet, their concerns remain.

“Romney is seriously behind with committed conservative voters, to catch up he must make the case … that a Romney administration, if elected, can and will produce conservative government,” Richard Viguerie, a long time conservative activist, wrote on his blog.

Viguerie declared he would never recognize Romney as a “bona fide conservative” and warned the former governor that he would be wise to choose a vice president that would satisfy conservative voters.

Tom McClusky, spokesman for the conservative action group Family Research Council (FRC) said the Council had not endorsed Romney in the primaries and would not be endorsing him for the general election. Now that there were just two candidates, Barack Obama or Mitt Romney, the choice is obvious, he said.

Marsico said conservative Republicans had reservations about Romney on a range of issues, citing “Romneycare”—the health care law put in place while he was governor of Massachusetts—as an example.

“It tells them that he may be sympathetic to some aspects of government-run health care,” she said.

In that regard, tea party supporters and evangelicals will be watching what Romney does in regard to the Supreme Court ruling on the Affordable Care Act due in June.

The majority of Republicans, however, will rally around Romney, Marsico believes, and he in turn will do what all presidential challengers do: “straddle the fence between ideology and pragmatism.”