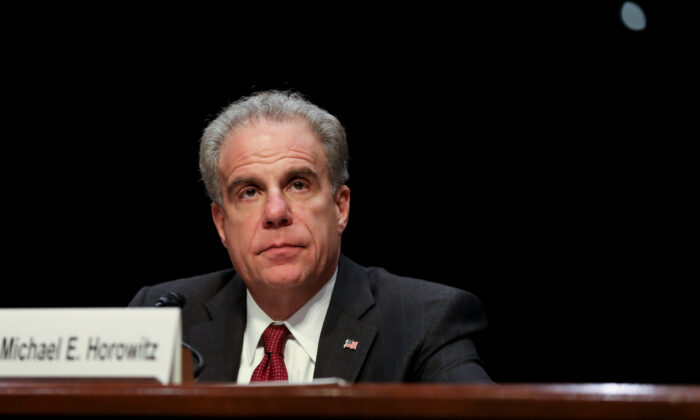 Republican leaders in the House and Senate Judiciary Committees are calling for the Justice Department’s Inspector General Michael Horowitz to testify on his new Foreign Intelligence Surveillance Act (FISA) audit report, which found that the FBI had failed to follow proper procedures needed to obtain FISA warrants.

Senate Judiciary Chairman Lindsey Graham (R-S.C.) and Rep. Jim Jordan (R-Ohio) have separately called for Horowitz’s testimony following the release of the preliminary findings in his audit on Tuesday.

The audit was initiated after Horowitz’s investigation into the FBI’s surveillance on former Trump campaign associate Carter Page found that there were widespread fundamental and serious errors in the FISA applications used to spy on him. The findings of that report, issued in December 2019, found “at least 17 significant errors or omissions in the Carter Page FISA applications, and many additional errors in the Woods Procedures.”

The follow-up review (pdf) determined that FBI agents broke the bureau’s policy by failing to follow the “Woods Procedure,” which requires agents to compile supporting documentation for each fact in a FISA application. The Woods Procedures were implemented in 2001 in an effort to “minimize factual inaccuracies in FISA applications” as well as to ensure that the statements are “scrupulously accurate.”

Horowitz reviewed a sample of 29 FISA applications spanning a five year period from eight FBI field offices. Of those, the FBI could not locate the Woods files—a record of that contains documentation that substantiates facts asserted in a FISA application—for four of the applications selected for review. Meanwhile, the office “identified apparent errors or inadequately supported facts” in the Wood files of the other 25 applications.

“[W]e believe that a deficiency in the FBI’s efforts to support the factual statements in FISA applications through its Woods Procedures undermines the FBI’s ability to achieve its ‘scrupulously accurate’ standard for FISA applications,” Tuesday’s memo stated.

In a statement on Tuesday, Graham said that he intends to ask Horowitz to appear before the senate committee to explain his findings on the problems identified in the inspector general’s audit.

Meanwhile, Jordan, the ranking member of the Democrat-led House Judiciary Committee, sent a letter to the committee’s chairman Jerrold Nadler (D-N.Y.) on March 31 to urge him to invite Horowitz to testify on FBI’s FISA process. Jordan had previously asked Nadler to invite the inspector general to testify after the December FISA report, but Nadler has so far resisted pressure to do so.

“Because of the pervasiveness and seriousness of the FISA application deficiencies—and the pending reauthorization of FISA—we renew our request that you invite Inspector General Michael Horowitz to testify at a public hearing promptly when the House returns to session,” the letter stated (pdf).

Jordan also said that the preliminary findings “validate” a Foreign Intelligence Surveillance Court judge’s concern about the “reliability of information contained in applications.”

The judge, Rosemary Collyer, said in an order in December that the frequency in which FBI agents abused the FISA processes in Page’s application calls into question whether the information in other FISA applications is reliable (pdf).

“The Committee must not allow the FBI’s extraordinary power to electronically surveil Americans to be so haphazardly rubber-stamped with incorrect, unsubstantiated, or erroneous supporting information,” Jordan said.

Congress is currently in the process of reauthorizing several domestic surveillance powers under FISA, which expired on March 15. The House struck a compromise on a number of reform issues and passed a bill renewing the expired provisions. The Senate was unable to reach an agreement and instead approved a short-term extension for the expired provisions through to May 30, which gives senators more time to consider amendments to FISA. The House will still need to pass the short-term extensions.