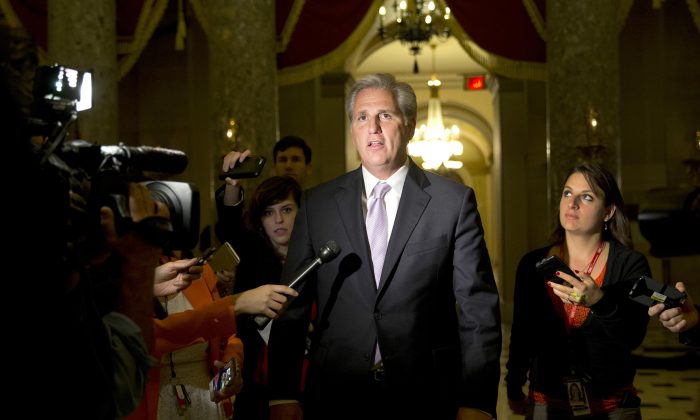 House Majority Leader Kevin McCarthy (R-Calif.) talks to media on Capitol Hill in Washington, D.C., on Oct. 21, 2015. McCarthy is giving no indication that last week’s fatal shootings at a Planned Parenthood clinic in Colorado will affect a House probe of the group for providing fetal tissue to researchers. (AP Photo/Carolyn Kaster)
Politics

WASHINGTON—A Republican congressional leader on Monday defended a House investigation of Planned Parenthood’s provision of fetal tissue to researchers, offering no suggestion that last week’s shooting deaths at one of the group’s clinics will cause the GOP to retreat from that probe.

But House Majority Leader Kevin McCarthy (R-Calif.) also indicated that the Republican-run Congress will not risk a government shutdown fight with President Barack Obama over GOP efforts to halt federal funding for the organization, which provides abortions and other health services to women.

“I do not see a shutdown happening in this process,” he told reporters.

Some conservatives want congressional leaders to include language blocking Planned Parenthood’s federal funds in a bill keeping federal agencies functioning past Dec. 11. Obama would veto such a bill, resulting in a partial government shutdown, a battle many GOP leaders hope to avoid with the approach of next year’s presidential and congressional elections.

“Those are separate issues completely,” Cornyn said of Planned Parenthood’s fetal tissue donations and the attack on its clinic.

An Obama veto would be certain if Congress sends him the bill obliterating the health care law and halting funding for Planned Parenthood. But that veto would not affect existing programs, and Republicans hope to get the measure to him so they can use it to draw contrasts with Democrats during the 2016 campaigns.

The Senate plans to debate that legislation this week. The House approved its version in October.

Planned Parenthood gets about one-third of its annual $1.3 billion budget from Washington. Federal money is barred from financing abortions except for rare cases.

With lawmakers returning to the Capitol for the first time since Friday’s killing of three people at a Planned Parenthood clinic in Colorado Springs, Colorado, the Senate’s top Democrat called on House Republicans to abandon their investigation of the group, which he called politically motivated. Without naming Republicans, Senate Minority Leader Harry Reid (D-Nev.) seemed to insinuate that the GOP has helped create a dangerous brew of issues.

“Whipping people into a frenzy of hate and anger while providing them with easy access to firearms has proven disastrous to our country,” said Reid. “We have a responsibility as leaders to think very hard about what we say and do in this context.”

McCarthy stood by the Republican-created House panel investigating how fetal parts are made available for research by Planned Parenthood and other organizations.

McCarthy said that committee, which includes Democratic members, is “where all pieces of information can come forward. We’ll see how that plays out.”

Democrats have said they are participating in that panel to be able to defend Planned Parenthood.

McCarthy suggested he’s seen heated rhetoric from abortion rights defenders as well and said, “This individual, this shooting, the thing that drove him most is he’s an evil, crazy man.”

Robert Lewis Dear, who acquaintances have called a loner, is accused of killing three people in the Colorado attack. A law enforcement official said Dear told authorities “no more baby parts” after being arrested, an apparent reference to secretly recorded videos of Planned Parenthood officials discussing tissue donations that have fueled an uproar among congressional Republicans and abortion opponents nationally.