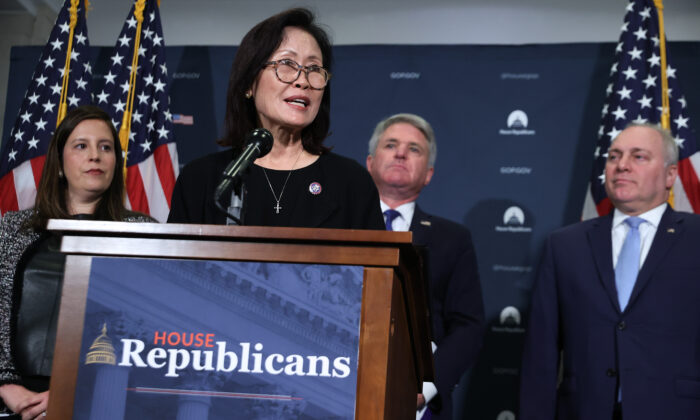 House Republicans have urged President Joe Biden to resolve a nationwide shortage of medical dye amid an ongoing supply chain crisis, which has prevented hundreds of patients from getting image scans used to diagnose cancers and other diseases.

The dwindling supply is a result of the prolonged COVID-19 lockdowns by the Chinese Communist Party (CCP) and the nation’s overreliance on Chinese-made medical products, the lawmakers said in a letter dated June 13.

In the letter, 30 lawmakers, led by Rep. Michelle Steel (R-Calif.), called on the Biden administration to “immediately deploy a whole of government response and work directly with stakeholders” to address the shortage of intravenous contrast fluids, a dye widely used in medical scans.

The imaging agents, made by General Electric’s healthcare unit, are often given to patients so that their blood vessels and internal organs can be more visible and picked up by procedures such as CT scans and magnetic resonance imaging (MRI).

Most of GE’s supplies for the United States came from a single manufacturing plant in Shanghai, which shuttered when the Chinese regime placed the city under a full lockdown on March 28. The citywide lockdown lasted for more than two months, and many COVID-19 restrictions are still in place though officials announced reopening on June 1.

While the company tried to gradually resume production in Shanghai and ramp up output at another plant in Ireland, many U.S. hospitals had already begun prioritizing patients and delaying less urgent scans to preserve supplies in May.

At the University of Virginia, more than 680 CT imaging appointments that were scheduled between May 6 and June 30 have either been rescheduled or canceled due to this shortage.

“This is only one of many examples,” lawmakers wrote.

“With the lack of intravenous contrast fluids and the potential for further depletion, many physicians and patients could continue facing delays in the detection of diseases like cancer,” read the letter.

In the latest update, GE said its plant in Shanghai has been back to full capacity since June 8, following the relaxing of COVID-19 resections in the city. But the supply crunch is not likely to be eased immediately. U.S. hospitals still need to wait for the shipment of new supplies from Shanghai.

The Food and Drug Administration (FDA) has continued to report shortages of Iohexol and Iodixanol intravenous contrast media products. FDA listed the shortage of Iohexol to continue until at least the end of June, while the current Iodixanol shortfall is expected to last through this year.

The Republicans said that shortages of the dye were “urgent and must be addressed.”

Meanwhile, they raised concerns over the United States’ dependency on China-made medical supplies and the dangers it entails, which has come into the spotlight since the early days of the pandemic.

“It is imperative that you prioritize efforts to domestically produce medical products such as intravenous contrast fluids and reduce federal barriers that prevent disbursement of needed medical products,” read the letter.

“Moreover, this shortage highlights the urgent need to establish an outbound investment review process to ensure that critical capabilities are not being offshored, especially to our adversaries, without visibility by the U.S. government,” it added.

“A proactive approach would address supply chain resiliency, improve access to care, and lower costs for our constituents.”