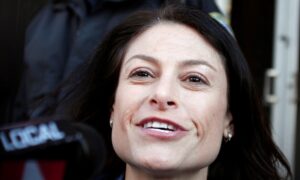 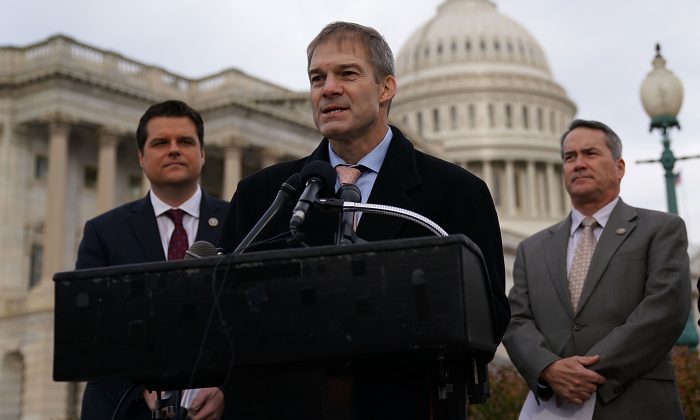 Rep. Jim Jordan speaks as (L-R) Reps. Matt Gaetz and Jody Hice listen during a news conference in front of the Capitol in Washington, on Dec. 6, 2017. (Alex Wong/Getty Images)
Companies

The briefing would require Bezos to clarify to Congress how AmazonSmile uses information from the Southern Poverty Law Center (SPLC) to make eligibility determinations for its program.

The SPLC is a legal nonprofit that says it monitors extremist groups and fights hate. But conservatives say the organization holds a strong bias against conservative organizations and promotes a radical agenda.

The GOP letter states “In particular, the SPLC has baselessly labeled some conservative charitable organizations ‘hate groups,’ alongside actual extremist organizations such as neo-Nazis and the Ku Klux Klan.”

The letter was sent from the House Judiciary Committee, of which Jordan is the ranking Republican, and was also signed by 13 other House Republicans who are not on that committee.

The conservative lawmakers cite a recent hearing of the House Judiciary committee’s Subcommittee on Antitrust, Commercial, and Administrative Law, which featured Bezos testifying for the first time before Congress.

A few of the GOP members of the subcommittee took the opportunity to question the CEOs of Big Tech about alleged bias against conservative individuals and groups on their respective platforms.

Congressman Gaetz asked Bezos why they use the SPLC data to determine which group can participate in their charity program since it has labeled conservatives like Ben Carson and organizations like the Alliance Defending Freedom or Family Research Council as extreme.

In his answer to the question from Gaetz, Bezos said, “Sir, it’s a good question. We have, for those of you who don’t know what Amazon smile is, it’s a program that allows customers to designate a certain fraction of their purchases to go charity that we then pay for, and they can select from any one of millions of charities, and we use the Southern Poverty Law Center data to say which charities are extremist organizations.” Adding, “Sir, I’m going to acknowledge this is an imperfect system.”

The letter goes on to say that “the exclusion of these conservative groups from Amazon’s heavily-trafficked digital platform leads to less exposure for these groups and fewer opportunities for donations,” adding, “In this way, Amazon’s reliance on the SPLC as a barometer to determine the eligibility of charitable organizations on AmazonSmile serves to discriminate against conservative views.”

Amazon did not immediately respond to The Epoch Times’ request for comment.

They continue: “Amazon’s ongoing reliance on the SPLC, with its documented anti-conservative track record, reinforces allegations that Big Tech is biased against conservatives and censors conservative views.”

At the July hearing, Gaetz suggested to Bezos that they divorce from the SPLC.