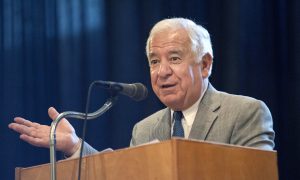 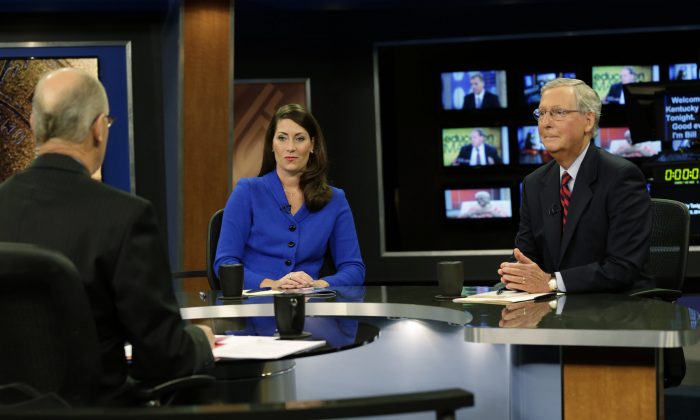 WASHINGTON—Struggling to preserve their Senate majority, Democrats are attacking Republicans over Medicare and Social Security in Louisiana, spending cuts in Arkansas, off-shore jobs in New Hampshire and women’s issues in Colorado.

Republicans have a one-size fits-all counter-argument. It’s Barack Obama, a two-term president they’ve turned into a political punching bag and pummeled at will while Democrats avert their eyes.

“Mark Begich is with Obama. I’m with you,” Republican challenger Dan Sullivan of Alaska says in his newest television commercial in one of several close race in red states that define the nation’s battle for Senate control.

He’s not the only one.

Senate Republican Leader Mitch McConnell, plagued by his own poor approval ratings, has said much the same thing for months in Kentucky. His opponent, Alison Lundergan Grimes won’t disclose if she voted for a president whose nominating convention she attended two years ago. At a debate last week, the secretary of state wrapped her refusal in lofty principle, citing a “constitutional right for privacy at the ballot box.”

After remaining off television for more than a week, Democrats say they will make one final advertising push on Grimes’ behalf. But Republicans sound increasingly confident that McConnell will win a sixth term, and nearly all public polls suggest the same.

Nationally, Republicans must gain six seats to win Senate control. The most competitive races, many in states where Obama lost in 2012, remain tight enough in the polls to leave the outcome in doubt after months of campaigning, a mid-October debate season and millions of dollars in attack ads.

As a result, it appears that Democratic hopes for maintaining Senate control hinge on overcoming Obama’s general unpopularity with a targeted get-out-the-vote program to boost turnout among blacks, young voters and women in key states.

Among them are Alaska, Arkansas, Georgia, Iowa, Kentucky, Louisiana, New Hampshire, North Carolina and Colorado, a state where Hispanic voters will be particularly important. Another state, Kansas, is in a category of its own, a Republican stronghold where veteran GOP Sen. Pat Roberts is struggling against independent Greg Orman.

There is evidence of a potent effort by Democrats to expand the customary midterm electorate. Arkansas reports 131,000 newly registered voters this year, and there are more than that in Georgia, the state where Democratic hopes of picking up a Republican seat are strongest.

Robert McLarty, in charge of the Democratic get-out-the-vote effort in Arkansas, says new voters are heavily black, young and female. “These folks have probably not been surveyed” by pollsters whose work points to a victory for Republican Tom Cotton, he added.

Yet Republicans say they, too, have spent months on turnout. “Our entire effort is now focused on low-propensity voters,” said Sean Spicer of the Republican National Committee, referring to people who either do not generally vote or do not usually support GOP candidates.

Other Republicans express skepticism at the Democratic claims.

“It’s not like the Democrats get to operate in a vacuum. We get to run a campaign, too,” says Justin Brasell, campaign manager for GOP Rep. Cotton in Arkansas.

In Colorado, Sen. Mark Udall stayed in Washington this year when Obama went to the state to raise campaign funds. More recently, the first-term Democrat made it sound like he himself was persona non grata at the White House. “When they look down the front lawn the last person they want to see coming is me,” he said.

Begich, elected narrowly six years ago in a heavily Republican state, has been running as a thorn in Obama’s side from the beginning. “As senator, he took on Obama to fix Alaska’s VA, exempt our schools from No Child Left Behind and is taking responsibility for fixing the health care law so it works for Alaska,” said an early-campaign commercial.

Though Obama is less than two years removed from winning his second term, his campaign efforts this year are largely confined to fundraisers from which the news media are barred — a step that ensures nervous candidates won’t be photographed by his side.

Interviewed by the Rev. Al Sharpton recently, he said he tells Democrats, “You do what you need to do to win. I will be responsible for making our votes turn out.”

Republicans have an all-purpose answer to that, as well.

When they learned Thursday Obama had given an interview to an Atlanta radio station, they swiftly circulated his remarks, calculating it would help Republicans win a close race in Georgia.