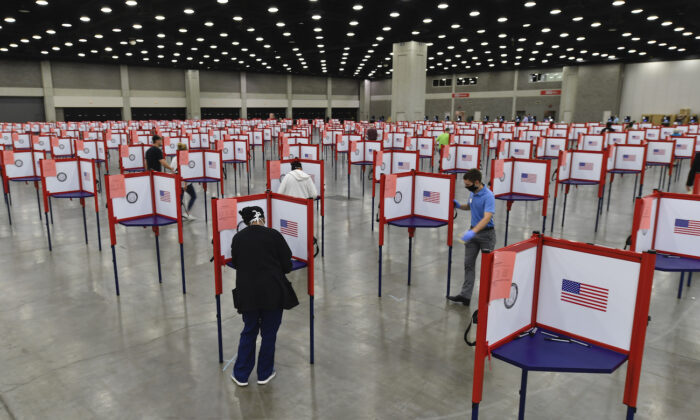 Republicans in Kentucky surpassed Democrats last month in the number of registered voters for the first time in history, according to state elections officials.

The state Board of Elections on July 15 released its monthly voter registration numbers, showing 1,612,060 voters registered as Republicans to 1,609,569 registered as Democrats.

The red shift now overtaking the state stands in stark contrast to the historical inter-party dynamics; several decades ago, Republicans had less than half the number of registered voters than Democrats.

“After a century and a half, the birthplace of Lincoln has finally aligned with the party of Lincoln,” Republican Secretary of State Michael Adams said in a statement.

Adams pointed out, however, that Republicans in his state now hold a plurality but not a majority, adding that the GOP must appeal to some of the 55 percent of non-Republicans in the state in order to win elections. Independents make up 137,116 of the total number of registered voters in Kentucky, while 189,727 are unaffiliated, according to the elections board data.

“Big news, y’all: Kentucky is officially a REPUBLICAN state. In a historic milestone, there are now more registered Republicans than Democrats in Kentucky,” they said in the post caption.

“Today is a day I never thought would happen,” McConnell said. “After decades of hard work and grassroots efforts across the Commonwealth, registered Republicans now outnumber registered Democrats in Kentucky.

“Congratulations to all my fellow Republicans who have worked so hard and so long to make this historic day possible. This is great news for the Commonwealth but it’s just the beginning.”

‘Political Tsunami Is Coming for Democrats’

Kentucky’s political phase shift comes as expectations are building for a possible red wave in this fall’s midterm elections.

A red wave is “inevitable,” Andy Roth, president of the State Freedom Caucus Network, wrote in a recent op-ed in The Federalist.

“A political tsunami is coming for Democrats,” he wrote, arguing that the recent victory of Republican newcomer Mayra Flores in a special election in Texas “signals what most political pundits and election prognosticators already know: a red tidal wave will soon sweep away a Democrat Party in thrall to far-left radicals and progressive extremists.”

Roth believes that the GOP will not only win a majority in Congress and will clinch majorities in the state Legislature, but that the candidates that do win will be a different, more conservative, breed of Republican.

“All across the nation in one primary after another, conservative state legislative candidates are defeating milquetoast establishment and moderate candidates,” he wrote.

“Unchecked progressivism, which has fully captured America’s cultural and political institutions after a decades-long march, now threatens the very freedom that undergirds our republic.

“Conservative warriors are being summoned by citizens ready to fight for the things that they love.”