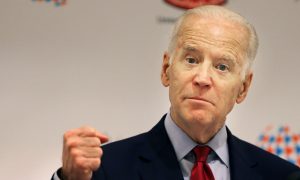 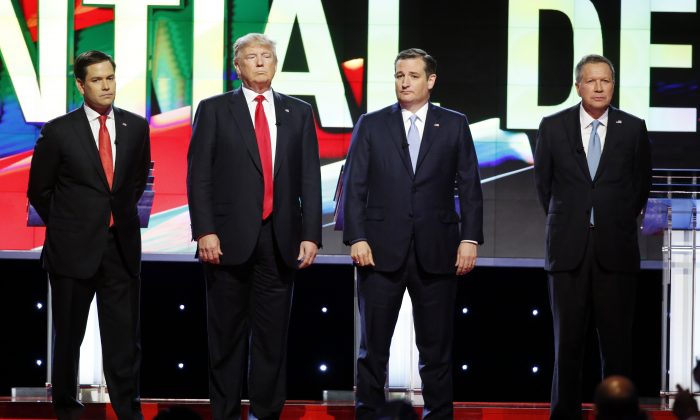 GOP Final 4 Tone Down Rhetoric, If Not Their Differences

MIAMI—A surprisingly restrained Donald Trump used the latest presidential debate to send a none-too-subtle message to Republicans still wary of his insurgent candidacy: “Be smart and unify.” Ted Cruz and Marco Rubio toned down their rhetoric, too, concluding that all-out attacks against Trump didn’t work.

“I can’t believe how civil it’s been up here,” Trump declared at one point in Thursday’s face-off of the GOP’s final four.

The candidates now charge out of Miami with four days left to make their final arguments before next week’s all-important big-state presidential primaries.

Trump was picking up an endorsement from onetime rival Ben Carson before heading to St. Louis and Chicago; John Kasich headed for his must-win home state of Ohio; Rubio made his home-stand in Florida and Cruz was shuttling from Florida to Illinois.

In all, 367 Republican delegates are at stake Tuesday in Illinois, Missouri, North Carolina, Ohio and the Northern Mariana Islands, a delegate haul that could go a long way toward determining the GOP nominee.

Democrats Hillary Clinton and Bernie Sanders, too, will be competing on Tuesday, with Clinton out to regain momentum after her startling loss to Sanders in Michigan this week.

Trump’s rivals, in a desperate scramble to halt his march to the nomination, gradually ramped up their criticism as the latest debate wore on.

Rubio’s overarching message: “I know that a lot of people find appeal in the things Donald says. The problem is presidents can’t just say anything they want because it has consequences around the world.”

Cruz, eager to cement his position as the party’s last best alternative to Trump, had a string of criticisms of the GOP front-runner, too, saying flatly at one point: “His solutions don’t work.”

When it was over, Trump pronounced it an “elegant” discussion. He was clearly intent on projecting a less bombastic — and more presidential — image.

“We’re all in this together,” he said early on, sounding more like a conciliator than a provocateur as he strives to unify the party behind his candidacy. “We’re going to come up with solutions. We’re going to find the answer to things.”

In a lengthy discussion of the threat posed by radicalized Muslims, Trump refused to back away from his recent statement that “Islam hates the West.” He said he wouldn’t stoop to being “politically correct” by avoiding such statements.

The Florida senator said the only way to solve the problem of violent extremists is to work with people in the Muslim faith who are not radicals.

Cruz bundled together his criticisms of Trump for what he called simplistic solutions on trade and on Islamic terrorists, saying, “The answer is not to simply yell, ‘China: bad, Muslim: bad.”

The candidates split down the middle — Trump and Cruz vs. Rubio and Kasich — on the likelihood of the GOP race coming down to a brokered Republican convention this summer.

“I think I’m going to have the delegates, OK?” Trump said.

Cruz heartily agreed with Trump on that.

Kasich, for his part, said it wouldn’t be so bad to have a contested convention. He added there are plenty of primaries left so “let’s not get ahead of ourselves.”

In a meaty discussion of Social Security, Cruz and Rubio both said they’d gradually lift the retirement age for younger workers to help stabilize the system and stave off financial disaster for the program.

Trump, in contrast, said he’d do “everything within my power not to touch Social Security, to leave it the way it is.”

On that issue, the GOP front-runner couldn’t resist taking a dig at the Democrats, saying he’d been watching them intensely —”even though it’s a very, very boring thing to watch” — and that they weren’t doing anything on Social Security.

Trump was questioned about whether he had set a tone at his rallies that fueled violent encounters between supporters and protesters.

“I truly hope not,” he said, but added that many of his supporters have “anger that is unbelievable” about how the country is being run and that some of protesters were “bad dudes.”