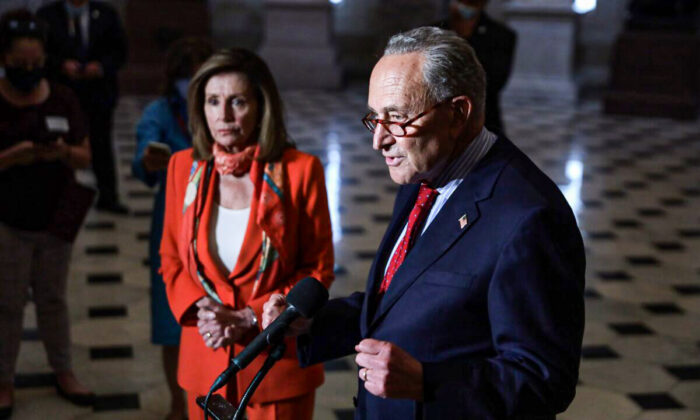 Democrats are blaming rising gasoline prices—which have reached unprecedented levels in various parts of the country—on monopolies and price gouging. Republicans have called this “political cover” for the midterms, which they are increasingly optimistic will see a GOP sweep.

According to data from the U.S. Energy Information Administration, when President Donald Trump left office, gasoline cost an average of $2.42 per gallon across the nation. Since Biden entered the White House, the price has increased dramatically. Data gathered by the American Automobile Association shows that as of March 8, gasoline costs an average of $4.17 per gallon.

Western states like California, Oregon, Washington, and Nevada have been especially hard hit, with the price of gas averaging around $5.44 per gallon in California. In Los Angeles, prices have come close to $7 for the first time in U.S. history.

Democrats and Republicans have widely varying interpretations of the reasons for this rapid increase in gasoline prices.

On March 3, Speaker of the House Nancy Pelosi (D-Calif.) blamed rising gas prices on Russia’s invasion of Ukraine and chided Americans for caring more about domestic gas prices than for the far-off Eastern European conflict.

“I heard a parliamentarian from Ukraine today saying, ‘Our people are being killed, our country is being overrun, and people are complaining about paying a little more for the price of gas,’” Pelosi said, indicating that she agreed with the sentiment.

However, gas prices have been rising steadily since well before the Russian troop buildup along Ukraine’s eastern border began.

“The bottom line is this: The real problem with increased gas prices is gouging and monopolies,” Schumer said on Tuesday. “You’re going to hear a lot more from us on those issues in the near, near future.”

Republicans have placed the blame on the White House’s energy policies, which they have called “anti-American.”

Upon taking office, Biden, citing an alleged “climate crisis,” overturned several Trump-era policies that had boosted the United States to energy independence for the first time in decades.

Most notably, Biden ended construction on the Keystone XL pipeline—which has been staunchly opposed by environmental groups since the administration of President Barack Obama—and placed a moratorium on the leasing of federal lands to oil and natural gas producers.

Sen. Bill Cassidy (R-La.) contended that Democrats are simply using the excuse of Russia, monopolies, and price-gouging as “political cover” ahead of a midterm season that was already projected to be favorable for Republicans.

“I will note that people promoting this tend to be Democrats who are up for reelection, looking for a way to offset the fact that they have been opposing development of America’s traditional fuels,” Cassidy said in a statement to Fox News. “Instead, now that we’ve got a spike in prices, they’re looking for political cover, if you will. Another excuse not to do what is politically inconvenient.”

House Minority Whip Steven Scalise (R-La.) argued that, “President Biden should immediately reverse his devastating policies that are causing gas prices to skyrocket and are giving Putin leverage against the rest of the world and return to the policies that were working under President Trump to create American energy dominance with gas prices below $2 a gallon.”

Sen. Joe Manchin (D-W. Va.), a Democrat who has often struck out positions against the White House and the rest of his party, has also placed the blame on Biden’s energy policies.

On March 3, Manchin led a bipartisan effort to ban Russian oil imports to the United States, which had continued to import 500,000 barrels of Russian oil per day despite the government’s condemnation of Russia’s military actions, which Manchin condemned as “hypocritical.”

However, Manchin also emphasized that to make up for the loss in Russian oil, the United States would need to increase its own domestic production.

“The United States has the ability to backfill and help all of our allies around the world as [Russia] uses energy as a weapon,” Manchin said.“We [produce energy] cleaner than anybody else; we do it in a better fashion than anyone else.

“We have the ability with [U.S. oil] reserves to do much more during this crisis,” he added.

However, there have been no indications yet that the White House or Democrat leaders will heed the calls coming from members of both parties. Rather, Democrats have seemed to double down on their energy policies.

In an interview with ABC News, White House press secretary Jen Psaki said that boosting domestic oil production through ending the oil lease moratorium and restarting the Keystone pipeline is a “misdiagnosis.”

On March 2, Democrats blocked a bill, with Speaker Pelosi’s approval, that would have restarted construction on the Keystone pipeline in order to promote “American energy independence from Russia.”

During a press conference, Pelosi said that she agreed with banning Russian oil but opposed Manchin’s demands that the United States increase its own domestic energy production.

Still, without a change in domestic energy policies gas prices look to be on track to continue to rise moving into the midterm season.

Though Biden slightly reduced gas prices for a short period in November 2021 by pulling from the Strategic Petroleum Reserve (SPR)—a move that was dismissed by Manchin at the time as a “policy Band-Aid” which could not be relied upon in the long term—the SPR does not have the capacity to sustain Americans’ longer-term energy needs.

Because Democrats have nearly-unilateral control of the White House, Senate, and House of Representatives, voters are likely to place the blame with the majority party.

On Tuesday, Biden announced that he would place an embargo on Russian oil. The move, without a simultaneous increase in U.S. energy production, could see Americans paying ever-higher prices at the pump.