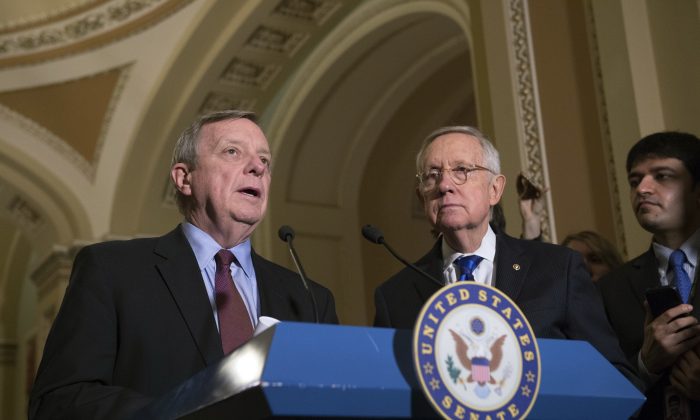 GOP Could Repeal, Before Replacing, Obamacare

The approach could allow congressional Republicans to take swift action on one of President-elect Donald Trump’s campaign promises, while putting off the hard part. And while repealing the law could be done with GOP votes alone, any replacement plan would likely require the cooperation of minority Democrats in the Senate, something that will not be easy to come by.

“Nothing’s been decided yet but I would move through and repeal and then go to work on replacing,” House Majority Leader Kevin McCarthy told reporters at the Capitol. “I think once it’s repealed you will have hopefully fewer people playing politics, and then everybody coming to the table to find the best policy.”

“We will get started on this right way,” the California Republican added. Without specifying a timeline, McCarthy suggested Congress could vote on a repeal quickly, while putting off the date for it to take effect. As that date neared, McCarthy predicted, there would be political pressure for all parties to come together around a replacement.

Sen. John Cornyn of Texas, the No. 2 Senate Republican, outlined a similar process, with a repeal vote followed by “a multiyear transition into the replacement.”

“This is a failed piece of legislation and it’s coming apart at the seams,” Cornyn said, “but it’s going to take us a while to make that transition from the repeal to actually replacing it with more affordable coverage.”

Six years after the Affordable Health Care Act became law, congressional Republicans have voted dozens of times to repeal it in part or full. But they still haven’t unified behind legislation to replace it, or to ensure that the 20 million people who’ve gained coverage don’t suddenly find themselves uninsured.

Now that Trump has won the presidency and Republicans will control both chambers of Congress next year, the GOP will have to deliver. That is certain to be tricky.

In one complication, Republicans can use a legislative maneuver called “budget reconciliation” to repeal the health law with a simple majority vote in the 100-member Senate. But to advance a replacement they would likely need 60 votes, requiring some Democrats to go along. Incoming Senate Minority Leader Chuck Schumer of New York has already warned Republicans he will try to turn their efforts to repeal the health law into a political nightmare.

Democrats argued Tuesday that GOP plans to pass a repeal bill but delay the replacement wouldn’t work. The resulting uncertainty could cause insurance companies to flee the marketplace, said Sen. Dick Durbin of Illinois.

“We’d find ourselves with even fewer options out there,” Durbin said. “So I think the Republicans, in the sober, cold nights when they sit around after their 57th repeal vote, say, ‘What in the world would we do if we repealed it?’ They don’t have a plan.”

The back-and-forth came the same day Trump announced the selection of House Republican Rep. Tom Price of Georgia as his secretary of Health and Human Services. Price helped craft a House GOP plan on health care that was unveiled over the summer, relying on individual tax credits to allow people to buy coverage from private insurers.

But the proposal fell far short of a full-scale replacement, leaving key questions unanswered including the size of the tax credits, the overall price tag of the plan, and how many people would be covered.

Since the election Trump has endorsed keeping certain popular parts of “Obamacare,” including a provision barring insurers from excluding people with pre-existing conditions from coverage, and another allowing young adults to stay on their parents’ health plans. House Speaker Paul Ryan, speaking Tuesday on WCLO radio in Wisconsin, endorsed keeping those parts of the law.

But Democrats insist there’s no way to keep the popular parts of the law without the elements people don’t like, including requirements for most individuals to carry coverage or face tax penalties. Insurers are only able to extend coverage to people with pre-existing conditions by having large groups of customers, including healthy people who don’t cost as much to insure.