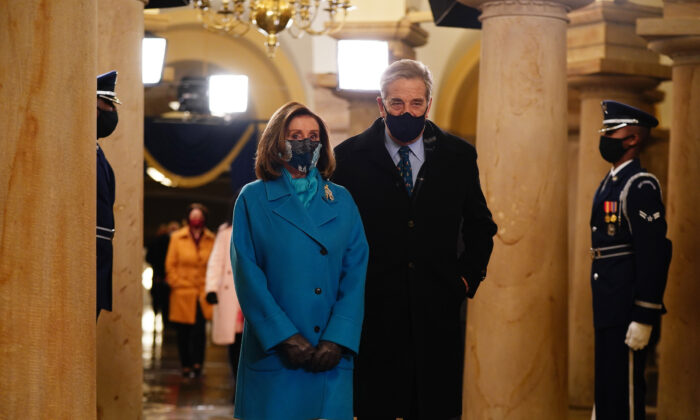 Speaker of the House Nancy Pelosi and her husband Paul Pelosi arrive in the Crypt of the US Capitol for President-elect Joe Biden's inauguration ceremony to be the 46th President of the United States on Jan. 20, 2021, in Washington. (Jim Lo Scalzo-Pool/Getty Images)
US

Strategists on How Paul Pelosi Attack Could Impact Midterms

Republican campaign strategists and conservative activists see little prospect that the brutal attack on Paul Pelosi in the posh San Francisco home he shares with Speaker of the House Nancy Pelosi (D-Calif.) will change anything about the Nov. 8 midterm elections.

Democrats interviewed by The Epoch Times see things quite differently regarding the violent assault, but they’re mostly cautious about whether it will have any impact on voters.

“The brutal attack on Paul Pelosi—and more importantly, Republicans’ callous response to it—reminds voters of the stakes. The same extreme MAGA supporters who fomented the attack on the Capitol [on] January 6 are still out there, trying to overturn legitimate election results and promising violence on Democratic leaders,” Democratic campaign strategist Christy Setzer told The Epoch Times.

“The question is how many people who’ve been on the sidelines will be motivated to vote, rather than be depressed that this is what it’s all come to.”

A veteran of Democratic presidential campaigns and a former press secretary for Senate Majority Leader Chuck Schumer (D-N.Y.), Setzer is the founder and president of the Washington-based New Heights Communications.

Other Democratic campaign strategists contacted by The Epoch Times declined to address the question of the potential impact, one way or the other, of the Pelosi attack.

Reactions among congressional Democrats were almost uniformly critical of Republicans whose rhetoric allegedly instigated a growing trend of politically inspired violence. Typical was the statement issued shortly after the attack by Rep. Bill Pascrell (D-N.J.).

“Now is not a moment for timidity. Let’s be direct. Today’s violence seems to be the direct product of Big Lies from many Republicans and Republican propaganda organs about Democrats and American democracy,” Pascrell said in the statement.

Rep. Steve Cohen (D-Tenn.) posted on Twitter that “the Pelosi attack and sick response from right-wing Trumpers and Elon (stick to cars) Musk is frightening, as it shows how low this country has been taken by [former President Donald] Trump’s family. I am truly worried about our country.”

Significantly, however, a coalition of 30 left-wing Democratic activist groups working in the “Protect Our Freedoms” coalition is launching a multimillion-dollar “closing argument” national advertising campaign on Nov. 2. There appear to be no references to the Pelosi attack in the effort.

“The group is seeking to get progressives on the same page in making the case to voters that the election is a choice between MAGA Republicans and the Democrats—and not a referendum on President Joe Biden’s first two years in office,” Axios stated.

Republican confidence about the Nov. 8 elections seemed unfazed by the Pelosi attack, especially on a day when the respected Cook Political Report moved 10 congressional races in blue states carried handily in 2020 by Biden from likely to remain Democrat to only leaning that way or toss-ups.

“The scariest Halloween reality for House Democrats is the number of seats President Biden carried comfortably in 2020 that are at genuine risk a week out,” Cook’s David Wasserman reported on Nov. 1.

As an example, Cook moved the race for Oregon’s open 5th Congressional District seat from a toss-up to leaning in favor of Republican Lori Chavez-DeRemer, who would become the state’s first-ever Hispanic woman elected to Congress.

“It isn’t so much that the Pelosi attack happened too late in the cycle, but rather that it isn’t the type of incident that will likely have the capacity to move the needle in this climate,” Keady said.

“This is not to downplay how horrific this kind of attack is, but for voters who are currently dealing with real economic struggles that are impacting their wallets every day and parents who are sending their kids to failing schools that are pushing radical policies, an isolated attack on a politician’s spouse by a clearly deranged individual is not going to have much of an impact on their ballot box considerations.”

Seton Motley, president of the Washington-based Less Government nonprofit, told The Epoch Times that he doubts the incident will have any measurable effect, other than repeating Democrats’ allegations about political extremism.

“This bogus line of attack on conservatives could have come at any time. It’s so transparently not an ideological thing,” Motley said of the assault on the 82-year-old Paul Pelosi. “Its only effect will be to further damage the reputation of the media pushing the ideological angle. There’s negligible impact on the campaign itself.”

Richard Manning, president of Americans for Limited Government in Fairfax, Virginia, told The Epoch Times: “While the Pelosi attack is horrendous, no matter the circumstances, the immediate politicization of it turns off more Americans than it engages. Americans care about crime and want violent offenders off the streets, unlike Democrat Party leadership in California and across the nation.”

David Hoppe, a longtime Republican leadership congressional aide, told The Epoch Times that he doubts the attack has any bearing at all on the election.

“The more information that comes out on this crazy attacker, the clearer it will be that he is not politically motivated but has serious mental and emotional problems,” Hoppe said.

An influential Republican strategist who requested anonymity told The Epoch Times that he views Democrats’ attempts to link the Pelosi attack to Republicans as a mark of last-minute campaign desperation.

“Democrats have failed the country on every conceivable policy metric. In a desperate attempt to keep their political control after November, they first latched onto ‘abortion’ to try to scare the country into voting for them. When that didn’t work, they tried ‘threats to democracy.’ When that failed, they finally latched onto this attack to try to minimize their losses in November. It is far too little, far too late,” the Republican strategist said.

“If anything, voters may see the hypocrisy of the media devoting 24/7 coverage to this while ignoring the knife attack against [New York gubernatorial candidate] Lee Zeldin or the assassination attempt against Justice [Brett] Kavanaugh. But it’s clear that this will not be the saving grace Democrats want it to be in November. They can’t defy political gravity no matter how hard they try.”