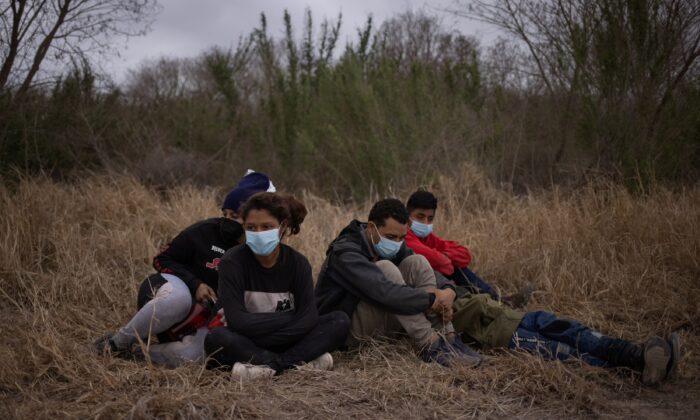 Unaccompanied minors from Central America are separated from other illegal border crossers by U.S. Border Patrol agents after crossing the Rio Grande river into the United States from Mexico on a raft in Penitas, Texas. on March 14, 2021. (Adrees Latif/Reuters)
Congress

Congressmen Greg Steube (R-Fla.) and Ted Budd (R-N.C.) told The Epoch Times in separate interviews Wednesday that they oppose H.R. 6, dubbed the American Dream and Promise Act, because it sets a precedent that sending children to the United States illegally will eventually be rewarded.

The U.S. House of Representatives is set to vote on the Democrat’s H.R. 6 on Thursday. The legislation would offer a pathway to citizenship to those who entered the country illegally as children and are currently living in the United States, also known as “Dreamers.” The same bill would also help immigrants in the country who received temporary migration protections. The bill is sponsored by Rep. Lucille Roybal-Allard (D-Calif.).

Steube said that Americans have a lot of compassion for children and that is why Democrats are emphasizing the children that were brought here illegally in H.R. 6. But he warned that passing H.R. 6 sets a wrong precedent that illegal immigration is ok, which is also one reason why he thinks the southern border is currently being inundated with illegal immigrants carrying minors.

These people, whether parents or smugglers, are sending children to the border hoping that if they send the children first, later, their entire extended family can gain citizenship through chain migration, the congressman said.

“You’re not going to be able to pause anything when you’re telling illegal immigrants that we’re going to give amnesty to illegal immigrants that are currently in the country,” Steube told The Epoch Times. “You’re incentivizing illegals to come to the country, if you’re telling them, ‘In 100 days, we’re going to give amnesty to illegals.'”

Budd also said he opposes H.R. 6 because, if passed, it would prompt even greater numbers of children to be sent to the border, and give drug cartels more motivation to keep using the “strategy” to overwhelm Custom and Border Patrol (CBP).

Budd said that once officers are busy dealing with unaccompanied minors it, “allows other illegals to come through that are either bringing in sex trafficking [or] narcotics. So, it’s a drug cartel strategy,” he explained.

“It creates a real crisis when we have to attend to unaccompanied minors. We, our country, care for children so much that we’re going to dedicate a lot of resources to it,” he said. “They’re messaging to the world come here, whether legally or not, and if you come here, we might catch you but we’re going to release you.”

An estimated 4.4 million illegal immigrants could become eligible for permanent residence if the bill for the American Dream and Promise Act is passed, according to the non-partisan D.C.-based think tank Migration Policy Institute. In 2019, when Congress first introduced H.R. 6, seven Republicans joined 230 Democrats in the House in voting for the bill.

Besides the Democrat’s push to pass H.R. 6, Steube said President Joe Biden’s actions to reverse many Trump-era immigration policies are also sending the message to migrants that they will get into the United States and can use the system to their advantage.

“When you come in and reverse all of those actions by executive order, you stop construction of the border wall, you stopped deportations, you’re going to go back to catch a release, where 96 percent of the people that are released aren’t going to show back up for those hearings. People are incentivized to come to our border because they know that laws of our nation aren’t going to be enforced,” Steube added.

Budd said he tried to introduce an amendment to H.R. 6, which would give U.S. citizens the right to sue sanctuary cities if they became victims of violence by illegal immigrants. But the measure was rejected by House Rules Committee Democrats.

Steube said that he would support Budd’s bill and any other that protects the rights of American citizens and encourages legal immigration.

Melina Wisecup and Mimi Nguyen Ly contributed to this report.