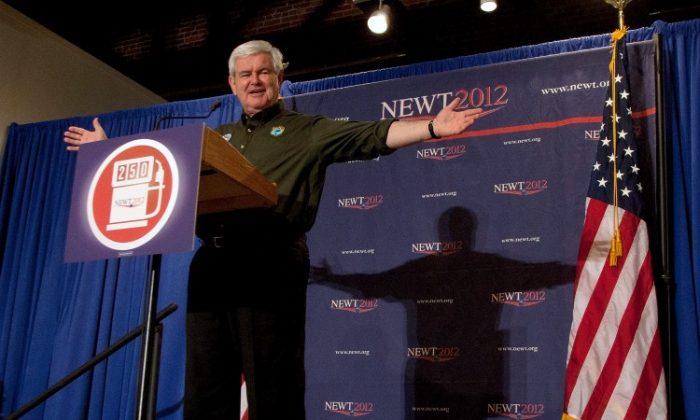 Republican presidential candidate former Speaker of the House Newt Gingrich campaigns at the Wiregrass Museum of Art on March 10 in Dothan, Ala. Alabama will hold its Republican primary election on March 13. Gingrich campaign adviser R. C. Hammond said that Alabama and Mississippi are critical for the candidate. (Mark Wallheiser/Getty Images)
US

GOP candidates continue to slug it out as they head into Alabama and Mississippi open primaries Tuesday, March 13, with all candidates vowing to continue despite signs that might suggest otherwise.

Rick Santorum, the newest challenger to front-runner Mitt Romney in a long line of not-Romney candidates, has managed to maintain his position as a serious contender for the nomination, winning the Kansas caucuses convincingly on Saturday while gaining 34 delegates on the day.

Not to be outdone, former Massachusetts Gov. Mitt Romney won the drawn-out Wyoming straw poll plus caucuses in three U.S. territories: Guam, Virgin Islands, and the North Marianna Islands, prompting his campaign to announce Romney the winner with the most delegates on the day. Romney gained 7 of the 12 delegates immediately on offer in Wyoming, another 14 at-large to be selected at a later date, plus 7 delegates from Kansas and the Virgin Islands, and 9 from the other two territories.

According to his campaign he gained 38 delegates on the day and is likely to remain tightly focused on the delegate count as he builds his path to the nomination.

“Today, Mitt Romney won more delegates than any of the other candidates and continued his momentum and path to getting the delegates needed to secure the Republican nomination,” Romney spokeswoman Andrea Saul said in a statement.

“In what was hyped as a big opportunity for Rick Santorum, he again fell short of making a dent in Mitt Romney’s already large delegate lead, much less winning 65 percent of the remaining delegates that is required for him to have a chance at getting 1,144 (he won less than 50 percent).”

According to the Republican National Committee (RNC), Romney has 393 secured delegates to date, Santorum trailing with 133 delegates, followed closely by former House Speaker Newt Gingrich with 110 and Texas Rep. Ron Paul with 24 delegates.

Santorum, a former Pennsylvania senator, dismissed the delegate count and focused instead on his latest win, the eighth all up. He reminded reporters in Alabama that in December of last year he had been dismissed with only 2 percent support in the polls, but now he was here to stay.

“Look, we are breaking all the rules and folks who like to play by the establishment rules, they just feel really nervous about us,” he said, according to ABC.

Mitt Romney is widely considered to be the eventual nominee in the Republican campaign, but cannot gain the full confidence of grass-roots conservative voters. He leads Rick Santorum by 10 points in an average of three national polls, according to RealClearPolitics, with Romney at 37.7 percent to Rick Santorum’s 27.7 percent. Newt Gingrich is more than 10 points behind Santorum with 14.7 percent of the vote and Ron Paul at 11.3 percent.

“Romney was and continues to be the front-runner and almost certain nominee, but he is not beloved by his party’s base and many Republicans are prepared to vote for alternatives who have no plausible route to the presidency,” say Thomas Mann, political analyst with the Brookings Institution.

Romney is also leading in polls in Missouri and Alabama but his rivals maintain they are in for the long haul.

Rick Santorum, meanwhile, is not mincing his words about what he would like to happen.

“Speaker Gingrich can stay in as long as he wants, but I think the better opportunity to nominate a conservative is to give us an opportunity to go head-to-head with Gov. Romney,” Santorum said on NBC’s “Meet the Press.” “Hopefully that occurs sooner rather than later.”

At the same time he continued his attack on Romney, saying; “He can’t close the deal,” while noting that the former governor had spent massive amounts of money on negative advertising but could still only win in Ohio and Michigan “by the skin of his teeth.”

“We’ve been slowly clawing our way back into this race. We’re in a great position right now,” Santorum said.

Newt Gingrich is polling badly nationally, and cracks in his campaign are appearing. One of his senior advisers told reporters last week that Alabama and Mississippi were critical in determining Gingrich’s continuation, but that was contradicted later by the former speaker himself.

“Everything between … Spartanburg [S.C.], all the way to Texas, they all need to go for Gingrich,” Gingrich adviser R.C Hammond told reporters. According to Politico, when asked if those wins were critical Hammond replied “Yes.”

Gingrich denied the urgency later and told The Associated Press on Friday that he expects to do well this coming Tuesday, adding, “But I just want to set this to rest once and for all: we’re going to Tampa.”

“Well, there are a lot of conservatives right now who are holding fire on Gingrich, who are backing—who are going, okay, he deserves next Tuesday,” said David Brooks a New York Times columnist on PBS “News Hour.” “But if he loses one of those two states, then I think you will see a wave of people, not even just Republican, but really quite conservative people, saying, ‘Newt, you had your chance. We have got to have a one-on-one.'”

Texas Rep. Ron Paul has also vowed to continue despite being unable to claim one win in the GOP race. He told supporters at a rally in Missouri Saturday he remains hopeful of a win but believes his contribution to the GOP campaign is important regardless.

“More people are energized now than ever before in our history,” he told reporters following the speech.

American Samoa and Hawaii will also hold caucuses on March 13, followed by Puerto Rico on March 18 and Illinois on March 20—a significant primary state with 69 delegates at stake.