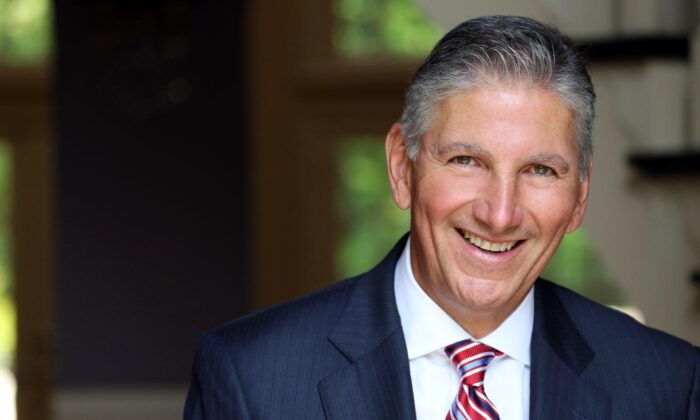 Redistricting following the 2020 census turned Congressional maps upside down across the country. In Georgia, that included pitting two incumbent Democrats, Carolyn Bourdeaux and Lucy McBath, against each other. McBath won the primary in the new 7th Congressional District, despite it mainly being Bourdeaux’s turf.

In the general election, McBath now faces Republican Mark Gonsalves. The district—in which previous races have been close; Bordeaux defeated Republican Rich McCormick by about 3 percent in 2020, and Republican Rob Woodall only defeated Bourdeaux by a few hundred votes in 2018—now clearly favors Democrats, according to the polls.

But Gonsalves says he’s closing the gap and resonating with voters.

The district centers on Gwinnett County, northeast of the city of Atlanta. That county is home to many Hispanics and Asians, making it unique in the Atlanta metro area. Politics here goes beyond Georgia’s typical story of black and white.

Pollsters have McBath up comfortably and don’t tend to list this as a competitive House race. Gonsalves says Cook’s Political Report listed McBath initially ahead by 16 percent. That lead, though, has recently shrunk to 10 percent, and in early July was as close as 8 percent.

Gonsalves is buoyed, though, by his own polling. When voters are told his policy positions, and with no attacks on McBath, the Republican said his surveys indicate that he leads 45–44, with 11 percent undecided.

Gonsalves said the district is 20 percent Hispanic, 21 percent African-American, 41 percent white, and 15 percent Asian. “It’s one of the most diverse in the country.”

McBath is black and has a personal story that resonates particularly with black voters. Her son Jordan Davis was 17 when he was shot to death in Jacksonville, Florida, in 2012 by a white man in a gas station dispute over loud music. The shooter was sentenced to life in prison without parole.

After that, McBath became a gun control advocate. She was elected to Congress in 2018, defeating Republican incumbent Karen Handel. The district had previously been heavily Republican, represented by Newt Gingrich and Johnny Isakson.

Gonsalves, though, has his own ethnic connection: he’s of Portuguese background and many voters see him as Hispanic.

He said his name is pronounced “gon-SALVS,” but his potential constituents tend to pronounce it “gon-ZAL-vez”—similar to the common Spanish name. He grew up near New Bedford, Massachusett, and doesn’t speak Portuguese, although his grandmother who had immigrated through Ellis Island did and, in his generation, his oldest brother did.

“I wanted to be an American,” he said. His father attending the U.S. Naval Academy was his family’s version of the American Dream.

Polls show Hispanic voters moving to the right this year. Democrats have historically relied upon them as an essential part of their base. A recent CBS/YouGov poll, however, shows only 45 percent supporting Democrats for Congress, while 42 percent of Hispanics now favor Republicans.

But they tend to be pro-family, anti-abortion, and pro-small business, he said. Many, like him, are Catholic. They have conservative views on public education, wanting good schools that don’t indoctrinate children. They want secure borders to stop the flow of drugs and gang violence into the country.

“A hundred thousand Americans a year die of fentanyl overdoses,” he said.

Gonsalves’s business background may resonate with district voters, he said. He was one of the first employees of Adams Golf, founded in 1988, which went public and became listed on the NASDAQ 10 years later. Since then, he has built several successful businesses.

Gonsalves tags McBath, meanwhile, for not living in the district—she lives in Marietta, northwest of Atlanta—and for choosing to abandon most of her 6th District constituents to run in a more favorable district. She did that at the expense of a colleague, he said. McBath beat Bourdeaux by a 2 to 1 margin in Georgia’s May primary for the 7th district.

McBath’s own 6th district was redrawn to favor Republicans, who have historically held it, sending people like Newt Gingrich and Johnny Isakson to Congress. Rich McCormick, who lost to Bourdeaux in the 7th District election in 2020, switched to the new 6th district and won its Republican primary in May.

Democratic strategist Fred Hicks of Atlanta says he isn’t worried about the 7th district flipping Republican. McBath as a woman of color resonates with many minorities there; one reason she beat Bourdeaux, who is white, so soundly, he said. Bordeaux had lost narrowly in 2018 and won narrowly in 2020.

Democrats are running a very diverse slate of candidates on the state’s ballot in November, including Bee Nguyen for secretary of state, their first ever Asian woman candidate statewide, Hicks said.

He acknowledged that Republicans have their own appeal to minorities. Incumbent Gov. Brian Kemp, running for reelection against Stacey Abrams, has appointed more black women to the bench than any other governor and the first Hispanic woman judge in DeKalb County in the Atlanta metro area, Hicks said.

He agreed the 7th District’s Hispanic community is very politically diverse, but he argued that cuts in the Democrats’ favor in some ways. South Florida’s Cubans and Venezuelans who escaped Communist or socialist regimes can be passionately anti-Communist, but that matters less on average to groups here. And while the border crisis looms for Texas Hispanics, the Mexican border is a long way from Atlanta.

“It’s easy to talk about (voting) blocs, but it’s way more nuanced than that,” Hicks said. “Republicans have historically been better at that than the Democrats.”

“She has such strong name identification and high likeability numbers that I think Lucy McBath is going to be fine,” the Democrats’ strategist said. “This is not a race I worry about.”