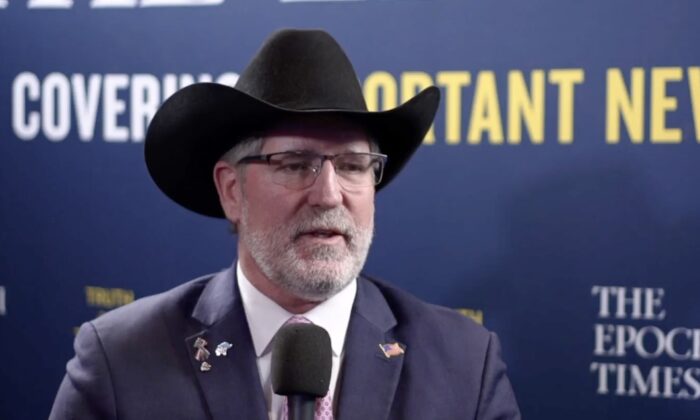 GOP Candidate Alleges Being Blackmailed to Drop Out of Race

An Arizona Republican congressional candidate alleges that he has been blackmailed into dropping out of the race in exchange for having Jan. 6, 2021, charges against his son dropped.

Jeff Zink, a Republican candidate in Arizona running for U.S. Congress, is challenging incumbent Rep. Ruben Gallego (D-Ariz.), who is running for reelection.

The district they run in includes much of Phoenix and is a Democrat stronghold. Zink said he has been campaigning in Phoenix, reaching out to Democrats and focusing on grassroots people.

The challenged incumbent is a proponent of socialist policies and a member of the Congressional Progressive Caucus. Gallego suggested in a Twitter post in February to seize trucks that formed a convoy near Washington to protest COVID-19 vaccine mandates and redistribute the vehicles to other trucking businesses.

The Congressional Progressive Caucus is the most radical and influential coalition in the federal government with extensive ties to several major Marxist organizations, according to Trevor Loudon, an author and filmmaker who researches radical and terrorist groups and their covert influence on politics. Loudon is the host of EpochTV’s “Counterpunch” program.

Zink recounted that he once received a strange phone call that wasn’t displayed on his phone, but a voice on the other end told him that if he dropped out of the congressional race, the Jan. 6 charges against his son would be dropped.

The metadata on the phone showed that no incoming call was taken in, Zink told EpochTV’s “Crossroads” program in an interview in July.

He said he has received several similar phone calls over the past year and a half. All of them attempted to pressure him to drop out of the race, but Zink said he wouldn’t do it.

Zink actively participated in the 2020 election audit in Arizona. “I was the only congressional candidate that worked 14 hours on the floor, and another six hours vetting other people to get them on the floor so that they could observe what happened in the audit.”

Zink said he and his son both participated in the Jan. 6, 2021, protest but never entered the Capitol building.

His son has been accused of entering the Capitol and having an interaction with the police, Zink said. Initially, his son was also charged with “trespassing on federal grounds” and “unlawfully interrupting a congressional and Senate hearing,” Zink said.

Some of those charges were later dropped, and now his son is only accused of interrupting a congressional hearing and Senate hearing, Zink said.

His son now faces “22 years [in prison] for entering into the Capitol,” Zink said. He claims that his son has never entered the Capitol and had stood next to him 100 percent of the time.

Zink recounted that on Jan. 6, 2021, both he and his son stood on the porch on the east side of the Capitol, the Senate side. “We’re away from the door.”

Then the door opened from the inside because there is no way that the door can be opened by pulling it, Zink said, adding that they recorded a video of it, which is used in his son’s case.

“We were completely opposite and away from that door at the corner on the Senate side on that porch and that’s how we got the video.”

Zink said he was interrogated by the FBI for an hour and a half in regard to his presence on the Capitol grounds on Jan. 6, 2021, and “was completely cleared.”

Zink also denied the accusation that his son “was fighting with the Capitol Police.” “I’ve got evidence, on the contrary, of what he actually did.”

Zink has shared with EpochTV’s “Crossroads” program a video he recorded on Jan. 6, 2021, at the Capitol porch. The video starts at minute 44:53 and shows Zink’s son standing in front of him while taking pictures of Hunter Ehmke shattering a Capitol window. Ehmke’s offense was also caught on Zink’s video (at minute 46:07).

How the Candidate’s Son Was Treated

Zink described how his son was treated by authorities even though he “didn’t go into the Capitol and had nothing going on with the Capitol Police.”

“He, on February the 4th of 2021, had the front end of his house literally torn apart. The FBI entered into his home, flash banged him and his dog, and then [dragged him] out and arrested him,” Zink said.

“Then basically kidnapped him, took him to the gulag there in Washington, D.C. He spent six weeks there in prisoner of war conditions.”

Since then, Zink’s son has been summoned several times for hearings, Zink said. The authorities keep saying that they have evidence that the candidate’s son was inside the Capitol, but the evidence hasn’t been presented so far, Zink explained, adding that he knows his son wasn’t inside the Capitol.

“Now, my son will go for the 11th time for his stay hearing for them to just present evidence that they’re going to use against him,” Zink said.

Zink said that, if elected, he plans to “restore the Constitution back to our Founding Fathers and do the right thing for the right reasons.”

Ehmke, then 20 years old, climbed onto a Capitol windowsill adjacent to the giant Columbus Doors and shattered several panes of the window by kicking and punching them.

Police tackled Ehmke while he was shattering the window and handcuffed him but later took his driver’s license and ordered him to leave Capitol property. Ehmke was arrested in California on Jan. 13, 2021, and was indicted on four charges two weeks later.

After a year, Ehmke accepted a plea deal for felony destruction of property, a charge that carries a maximum penalty of 10 years in prison and a $250,000 fine. He was sentenced to four months in jail, paying $2,821 restitution for window damage, and three years of probation.

“Though Ehmke did not enter the Capitol and did leave when directed to do so by police, his destructive acts at the front of the mob contributed to the overall violence and events of Jan. 6,” U.S. Department of Justice attorney Anne Veldhuis wrote in a 21-page sentencing memorandum.

Zink said that his friend Bob Powell, the host of “The Truth is Viral” podcast, reached out to Ehmke’s family and found out that Ehmke was involved at the time of his offense in Black Lives Matter and Antifa, but this piece of information hasn’t been reported.

Powell, the semiretired Michigan radio journalist, confirmed Ehmke’s involvement in BLM and Antifa in an email to The Epoch Times.

Zink emphasized that Ehmke, with unsurmountable evidence documenting the crime he committed, was released shortly after being apprehended by police and received only a light slap, while Zink’s son was arrested after his home was raided by the FBI, spent six weeks in a harsh prison, and now faces 22 years in prison without any evidence of wrongdoing.

Zink said that he presented all pictures and videos he took on that day to the FBI.

The FBI didn’t respond to a request for comment by press time.