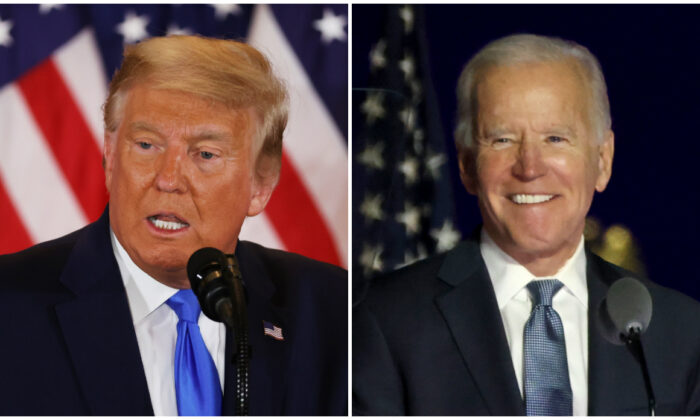 Elections officials are still counting ballots in the state, showing that Biden’s lead over President Donald Trump is narrowing.

Trump received “over 59 [percent] of this first small AZ vote dump, above the 57 [percent] pace he needs to surpass Biden & win Arizona,” Murtaugh wrote. He added that “5 of 7 election decision orgs haven’t called AZ. Fox & AP should rescind theirs … Fox & AP made a hasty call in AZ, a state the President will still win.”

Decision Desk, ABC News, CNN, and others have not called it for Biden.

The Arizona GOP, in a Twitter post, echoed Murtaugh’s statement: “We’re calling on @FoxNews to retract its early and rash call that Biden has won AZ,” noting a Republican edge in remaining ballots. “Other outlets haven’t made the call.

Dial 888-369-4762 (Press 3) and tell them to retract the call! #StopTheSteal #ProtectYourVote pic.twitter.com/rxWx0pmAbp

Poll aggregator Nate Silver, the founder of FiveThirtyEight, said AP and Fox should retract their calls for Arizona.

“I don’t know, I guess I’d say that Biden will win Arizona if you forced me to pick, but I sure as heck don’t think the state should have been called by anyone, and I think the calls that were previously made should be retracted now,” Silver wrote in his website.

Silver noted that there are about 450,000 outstanding ballots, with 23 percent Democratic, 44 percent Republican, and 33 percent independent—or other parties.

Trump needs to win the remaining AZ votes by something like 20-25% depending on how many ballots there are. By party registration, late-arriving mail votes were something like +19% R, per my (quick) calculations.

“Trump would need to win those votes by 21 points to overtake Biden’s current 93,000-vote lead,” he said, adding that it is possible the president could win the state by a slim margin. “Overall, I’d say this is likely Biden,” he concluded, “but I don’t think the state should have been called yet.”

Should Trump win the state, he would need to maintain leads in Georgia, Pennsylvania, and North Carolina to secure his reelection. If Biden wins Arizona, his chances of taking the presidency are near-certain barring legal challenges from Trump.