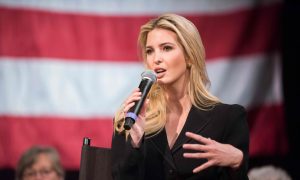 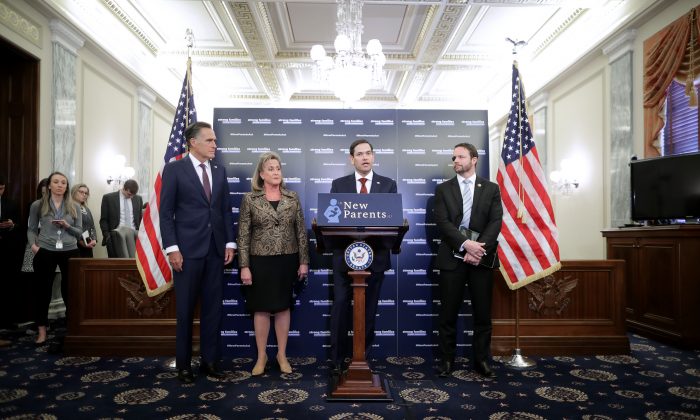 WASHINGTON—Sens. Marco Rubio (R-Fla.) and Mitt Romney (R-Utah) want parents of newborn or adopted children to be able to use their future Social Security benefits now to pay for up to three months of paid leave.

“Our proposal would let new parents pull forward a portion of their Social Security benefits for one, two, or three months of paid parental leave after the birth or adoption of a child,” Rubio said during a March 27 news conference.

Rubio and Romney were joined in the news conference by Reps. Ann Wagner (R-Mo.) and Dan Crenshaw (R-Texas), who introduced a companion bill in the House.

“In exchange, parents can either choose to delay their retirement by about six months per child, or they have the option of receiving a reduced Social Security benefit during the first five years of retirement at an equal size,” Rubio said.

“There are only two states where births are outpacing deaths, and one of them is my home state of Utah. That means a lot of Utah families are having children, and it also means added expenses for those families,” Romney said.

“The New Parents Act will give parents the flexibility to take time off from work with pay during the first weeks of their children’s lives, without growing our national debt, raising taxes, or creating a new entitlement program,” he continued.

The bill is a slightly revised version of a proposal Rubio introduced in 2018.

“We have put forth a responsible paid family leave policy that allows new parents flexibility to spend more time with their children during one of life’s most precious and exceptional moments,” Wagner said.

Wagner claimed the measure would not require an increase in federal taxes or add new financial burdens on small business.

“It is rare that we get the chance to drastically improve the lives of hard-working families with no long-term impact on our budget. By giving families temporary access to future funds when they’re growing their family, we are helping Americans when they need it most. This will be a life-changing option.” Crenshaw said.

The proposal reflects Republican worries about being able to carry Rust Belt states like Wisconsin, Michigan, Ohio, and Pennsylvania that were crucial to President Donald Trump’s 2016 election victory, thanks in great part to votes from blue-collar households that normally support Democrats.

Democrats made substantial inroads in those states during the 2018 congressional elections that saw the party gain 40 seats and return to the House majority.

The newest proposal from the four GOPers is aimed directly at blue-collar households.

“The benefit amount is large enough that nearly all parents below the median household income of about $60,000 will be able to take significant leave at a rate of two-thirds of their prior wages,” Rubio and Romney claimed in a summary of their proposal’s provisions.

“Many parents, especially those with low incomes, will be able to finance longer than three months of leave with the benefit,” the senators said.

But the proposal drew a withering critique from the conservative Heritage Foundation’s Rachel Greszler, a research fellow in economics, budget, and entitlements.

“Everybody wants paid family leave and Democrats and Republicans can agree on that,” Greszler told The Epoch Times. “Unfortunately, good intentions don’t make good policy and I think that’s certainly the case here.”

The basic problem with the proposal, according to Greszler, is that attaching a paid family leave program on top of Social Security will eventually impose huge new financial burdens on the country’s oldest entitlement program.

“By using the most popular federal entitlement program in the country, that only guarantees that what is intended to only be a limited program will grow into a massive program,” Greszler said.

The paid family leave benefit will also act as a magnet for saddling Social Security with other programs that are unrelated to the basic goal of assuring elderly Americans with a measure of financial security, she said.

“It’s using Social Security in a way it was never intended to be used,” Greszler explained. “It’s supposed to an anti-poverty program for older individuals and now, this is treating it like a personal piggy bank that workers can tap into.”

Greszler said there is already a proposal in Congress to allow workers to use future Social Security benefits to repay students’ college loans.

“Then you could think about purchasing a house, could you borrow against your Social Security benefits for that?” she said.

The 2018 Report of the Social Security system’s trustees projected that the program will run out of reserves in 2034 and that general tax funds will only be able to pay about 75 percent of promised benefits thereafter.