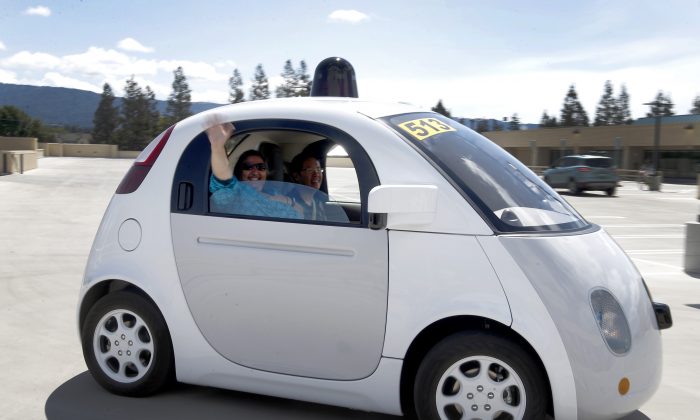 In this May 13, 2015 photo, Teresa Favuzzi, of Sacramento, waves as she gets a ride in the new Google self-driving prototype car during a demonstration at Google's campus in Mountain View, Calif. The plan of traditional automakers is to gradually automate more functions of driving until, perhaps by 2025, some cars will be fully capable of driving themselves. But Google, Alibaba, Baidu and other tech companies are aggressively working on their own self-driving vehicles, and could leapfrog the car industry in bringing them to market. (AP Photo/Tony Avelar)
US

Google’s Self-Driving Car Pulled Over for ‘Driving too slowly’

One of Google’s self-driving cars was pulled over for “driving too slowly” in Mountain View, Calif., according to reports.

Google’s self-driving car got pulled over for driving too slow https://t.co/ccjhQ9D69g pic.twitter.com/o508no7lZk

The San Jose Mercury News reported that a police officer stopped one of the vehicles on El Camino Real. The Mountain View Police Department stated that the officer noticed traffic was backed up behind a slow-moving car in the eastbound No. 3 lane near Rengstorff Avenue.

It was traveling 24 mph in a 35 mph zone. “As the officer approached the slow-moving car he realized it was a Google Autonomous Vehicle,” the police department said.

“The officer stopped the car,” the post added, “and made contact with the operators to learn more about how the car was choosing speeds along certain roadways and to educate the operators about impeding traffic.”

The Google Self-Driving Car Project issued a statement on the matter.

“We’ve capped the speed of our prototype vehicles at 25 mph for safety reasons,” the Google Plus post said. “We want them to feel friendly and approachable, rather than zooming scarily through neighborhood streets.”

It’s unclear who would get a ticket.

Google’s self-driving car gets pulled over for driving too slowly https://t.co/xoq7LJa4YG pic.twitter.com/n7j7SmUXOV

“Like this officer, people sometimes flag us down when they want to know more about our project,” the Google Self-Driving Car Project wrote in its post. “After 1.2 million miles of autonomous driving (that’s the human equivalent of 90 years of driving experience), we’re proud to say we’ve never been ticketed!”

“We all immediately dropped what we were doing to go look,” Milewski said. “It’s not something you see every day.”

The Google self-driving cars are driving in Mountain View and Austin, Texas.